Merry Christmas, everyone! It’s become a bit of a Christmas Day tradition here at The Loadout to bring you our annual awards coverage to maybe spark some debate and conversation around the table with the other gamers in your family.

Last year for our 2020 Awards, we dished out prizes to the likes of Call of Duty Warzone, Among Us, and many more. This year, the field is looking mighty different. We’ve got brand new categories alongside some returning ones, an extended ‘alternative awards’ section, and of course that coveted Game of the Year prize, which will be bestowed upon one exemplary videogame.

This year we’ve seen everything from high-profile flops, to genre-defining shooters, to stunning open world racers hit shelves and online stores. It’s certainly been a significant 12 months for game releases, and we’ll distil it all into this article, celebrating some of our favourite games of the year while also looking back at the lighter side of 2021 too.

Here we go then, let’s dive into The Loadout Awards 2021. 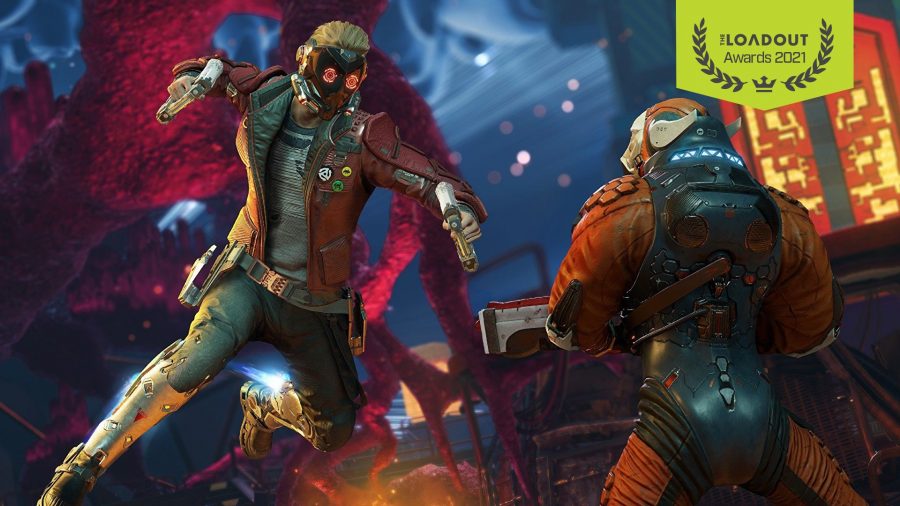 Surprise Game of the Year: Marvel’s Guardians of the Galaxy

While maybe not the absolute best game of the year, we think Marvel’s Guardians of the Galaxy was the most pleasantly surprising game of 2021. Despite being slightly sceptical prior to launch, we here at The Loadout were blown away by just how well this single-player adventure was put together by Eidos Montreal.

There was a lot of opportunity for this game to fall short, with the Guardians being some of the Marvel Cinematic Universe’s most loved characters. But the story hits in all the right places, the soundtrack is ace, and the characters are more engaging and nuanced than in the films. Plus, it was packed with accessibility options to ensure everyone could enjoy it.

It faced stiff competition from the likes of Splitgate and Riders Republic, but Guardians of the Galaxy won our vote by a nose.

You can read our Marvel’s Guardians of the Galaxy review here. 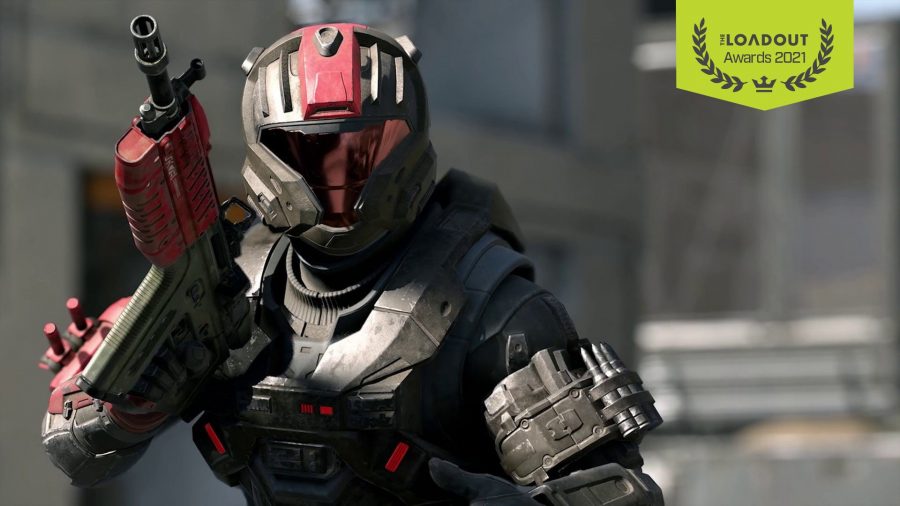 2021 saw a number of dark horses gallop their way into the competitive multiplayer scene, such as portal-poppin’ arena shooter Splitgate and the surprisingly popular battle royale Naraka Bladepoint. However, it was this year’s most anticipated multiplayer title that takes the crown here.

While its ropey progression system somewhat tarnished its multiplayer launch, there is no escaping Halo Infinite’s truly addictive gameplay. While the Halo Infinite ranked mode could be improved for those at the very top of the pyramid, it is overall an amazing multiplayer experience that nails the Halo formula fans have loved for two decades. Alongside Splitgate, Infinite proved that a gameplay-focused arena shooter still has legs in today’s bustling multiplayer market. 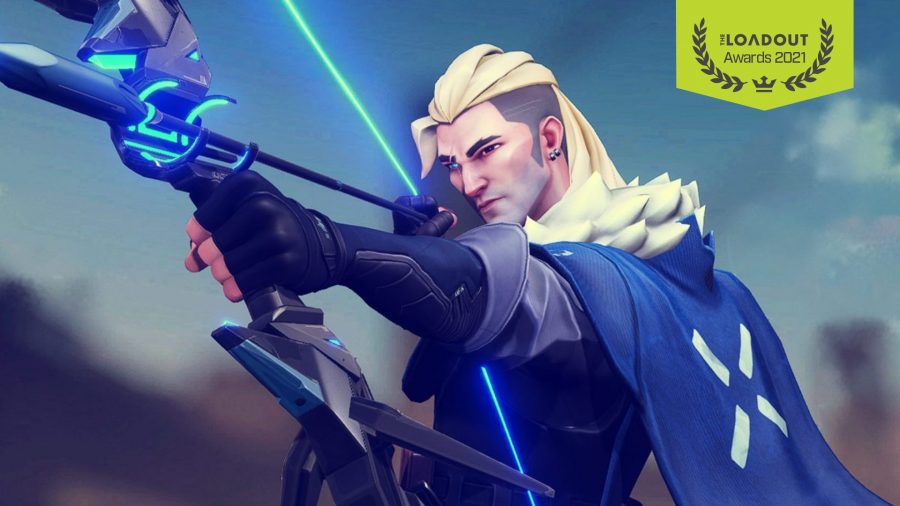 Esports game of the year: Valorant

As only a handful of newly-released games from 2021 have gone on to set up their own established esports scenes, this category will look at the esports scenes that have improved or grown the most over 2021. After considering the field, we’re handing the award to Riot Games’ Valorant.

While the first full season of the Valorant Champions Tour was not without its hiccups, Riot has created yet another great esports product and has grown competitive Valorant massively in 2021. Featuring amazing storylines, three international LANs, and plenty of opportunities for aspiring players to make their mark, Valorant’s first proper competitive year showed promising signs for the future of the esport. 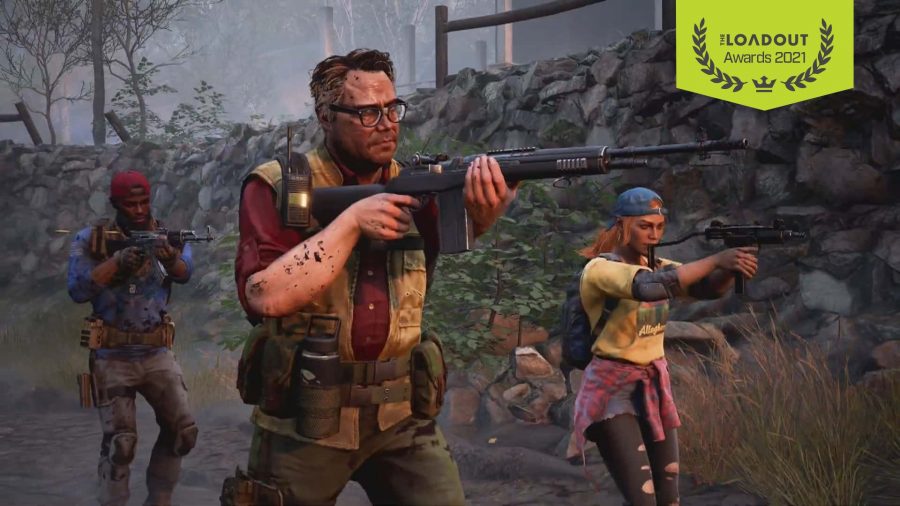 Best co-op game of the year: Back 4 Blood

We’ve been spoiled for choice with co-op games this year, and this was a category that really split opinion among The Loadout’s team. From cruising around the vibrant biomes of Mexico with pals in Forza Horizon 5, to battling sentient vacuum cleaners in It Takes Two, there’ve been a lot of great co-op experiences.

However, the team’s collective favourite co-op game of the year is Back 4 Blood. While there are certain aspects of the game that still need tightening up, such as its PvP mode, playing this game cooperatively with friends is an absolute blast. Building decks to both suit your playstyle and compliment the strengths of your fellow Cleaners adds a really appreciated technical layer to the experience too. 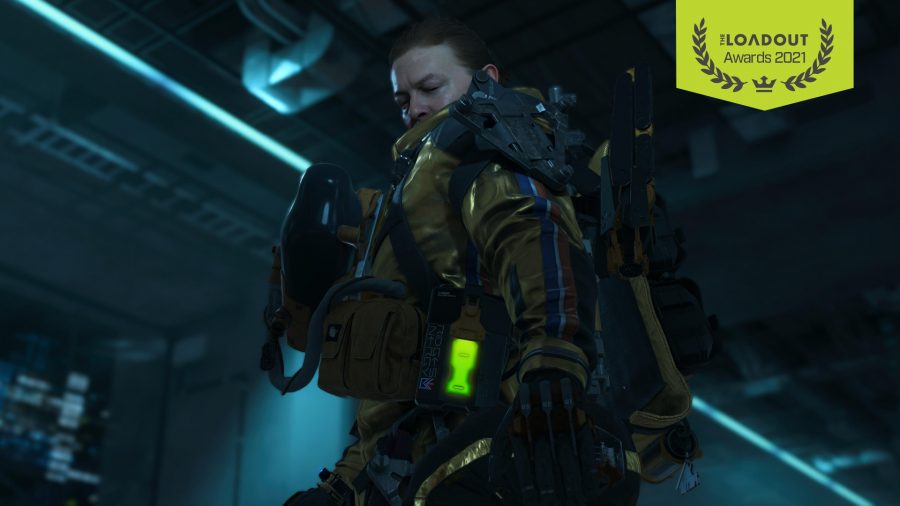 2021 has been the year of the new-gen upgrade, whereby existing games get shiny new re-releases packed full of enhanced graphics, quicker load times, and all the other benefits the PS5 and Xbox Series X|S have over their last-gen counterparts. However, we think the most impressive is Death Stranding Director’s Cut on the PS5.

Aside from the new content, the PS5 Director’s Cut offers enhanced visuals and performance, and adds 3D spatial audio, as you’d expect. But it’s this game’s ingenious use of the DualSense’s haptic feedback that tips it for us (more on that in a later category, too). Plus, at just $10 for original Death Stranding owners, it’s arguably the best value for a paid upgrade from this year as well.

You can read our Death Stranding Director’s Cut review here. 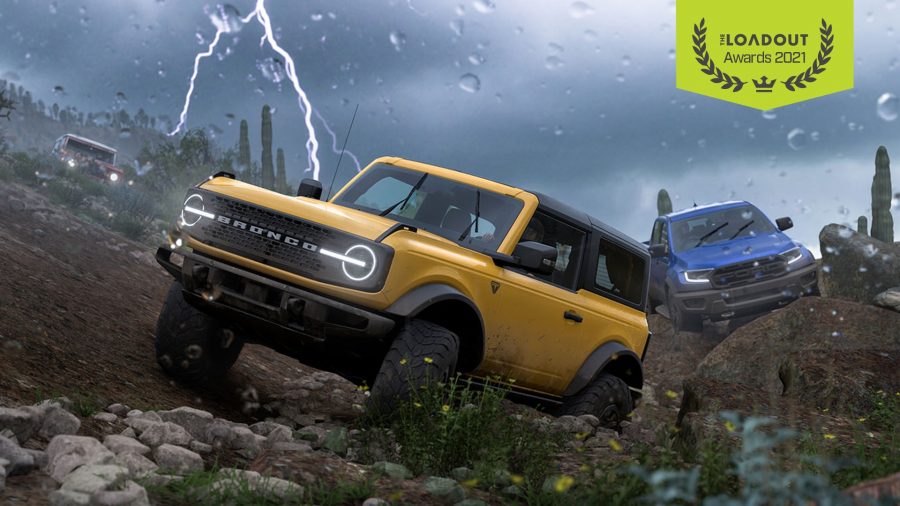 With the PS5 and Xbox Series X|S giving console gamers more grunt than ever before, this year has been awash with boundary-pushing games. From enormous worlds that instantly load, to breathtaking visuals, this new tech is helping make console games look and run as well as they do on most PCs these days.

But for our money, the game that utilised that new power to best effect is the amazing Forza Horizon 5. From speedy load times, to detailed vehicles, to an enormous and intricate open world that looks stunning at any angle, height, or distance, Forza Horizon 5 is a significant step up from its predecessor thanks to the power of the Xbox Series X|S.

You can read our thoughts on this impressive open-world racer in our Forza Horizon 5 review. 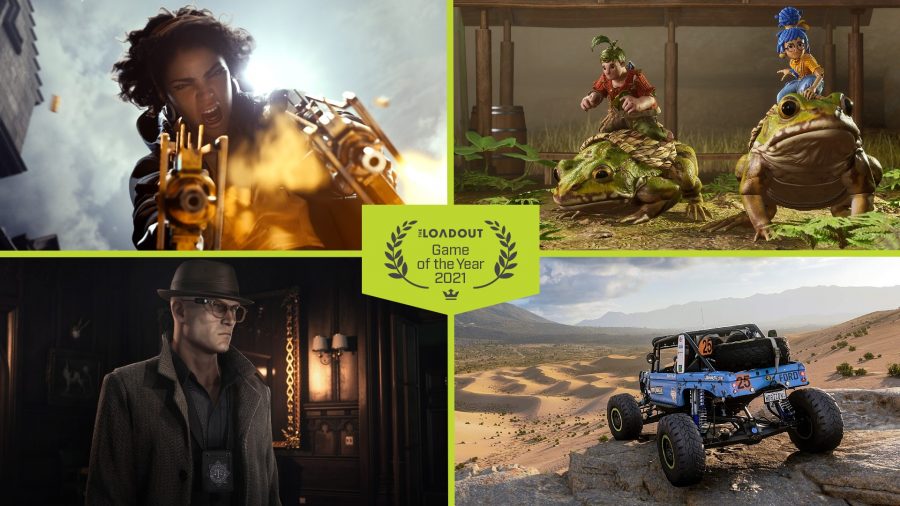 From flops, to masterpieces, it’s time for the big one: The Loadout’s Game of the Year. In the build up to our awards show, each member of the team has put forward their personal nominee for Game of the Year.

Joe believes that for its clinical execution, innovative design, and amazing art style, Deathloop should be our GOTY.

Aaron, meanwhile, is rooting for Hitman 3. Thanks to its gorgeous, varied locations and polished gameplay, IO has perfected the Hitman formula.

Forza Horizon 5 is Jamie’s pick. While there’s lots to love about this expertly crafted racer, it probably deserves a GOTY nod based on its stunning open world alone.

And finally, Jess is nominating It Takes Two for its diverse and intoxicating gameplay that spans several genres and takes co-op gaming to a new level.

However, there can only be one winner. After an internal vote, we found a deserving Game of the Year. Congratulations to…

Arkane has done something that is genuinely hard to do in this day and age – make a game that is truly unique. 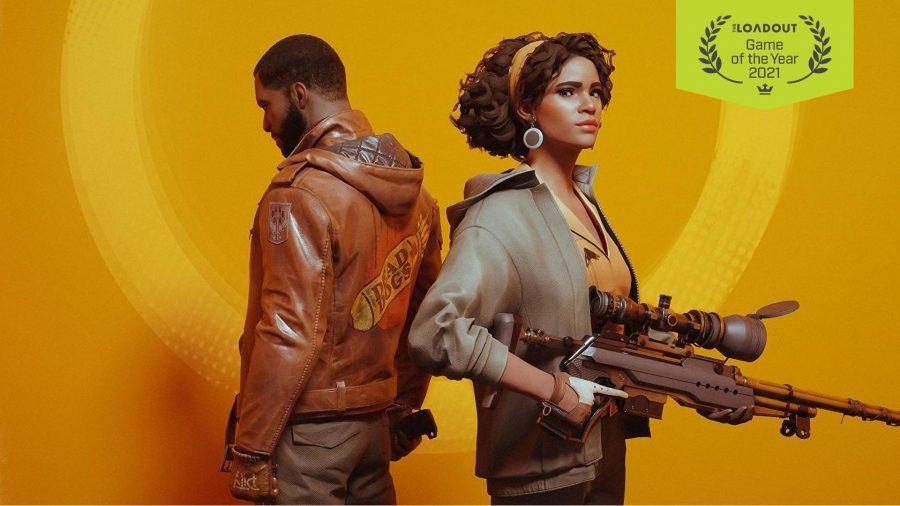 While Deathloop’s concept alone makes it an awesome experience, its exceptional execution elevates it from a great game to a true masterpiece – something we talk about in our Deathloop review.

From lighthearted awards based on some of this year’s newly-released games all the way through to our favourite streamer, these alternative awards didn’t require quite as much deliberation and arguing as the more serious categories above. 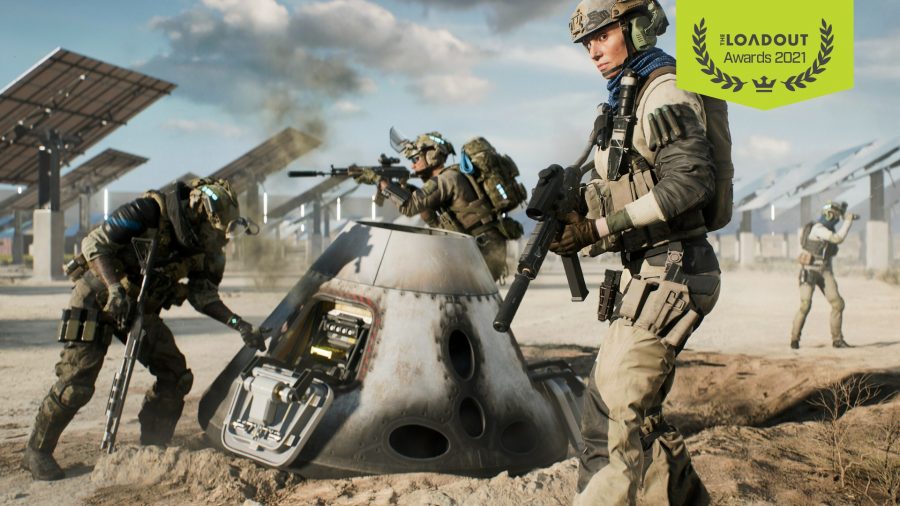 2021 was a year crammed with great games, but it was also peppered with some real disappointments too. From the clearly unfinished and bug-ridden eFootball, to Call of Duty Vanguard’s lack of a true zombies experience, some players have not been impressed. But the game that made us sigh with disappointment the most has to be Battlefield 2042.

While EA and DICE are hard at work right now making amends and getting things sorted, 2042 launched in a pretty abysmal state. The clearly unfinished large-scale shooter was plagued with bugs, lacked key features such as in-game voice chat and leaderboards, and Hazard Zone was a disappointing experiment. While Battlefield Portal is the game’s redeeming feature, it was not enough to prevent 2042 from earning the most severe of receptions from players. 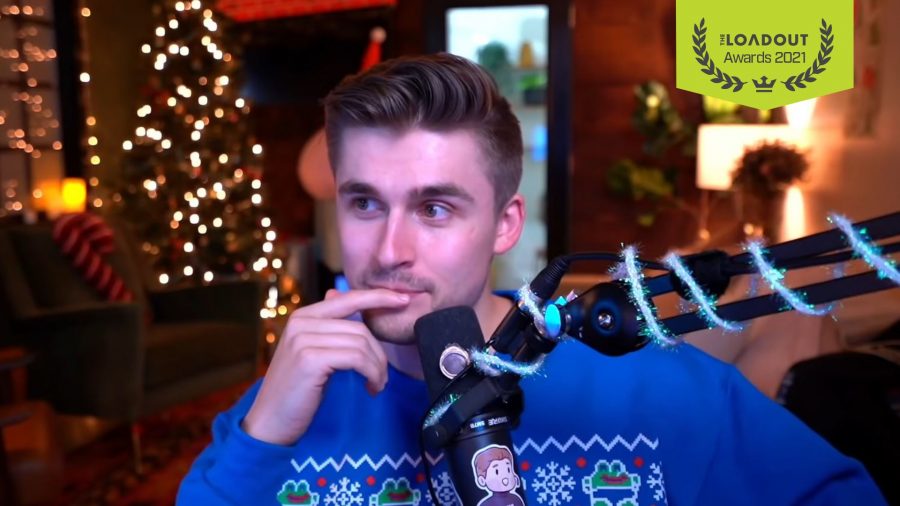 Streamer of the Year: Ludwig

The popularity and influence of the world’s biggest streamers has grown once more in 2021, and plenty of established Twitch, YouTube, and Facebook Gaming streamers have seen their viewership, audiences, and general notoriety soar this year. Oh, and we got to see just how much some of them pocket from livestreaming too (spoilers: it’s more than you might think).

Some candidates for this award include Ibai ‘ibai’ Llanos – who streamed with footballing royalty Lionel Messi and had over 600,000 people tune in to watch his ridiculous but enthralling Balloon World Cup – or Felix ‘xQc’ Lengyel, who still consistently tops the Twitch leaderboards for total watch time every single month.

However, our Streamer of the Year is Ludwig ‘Ludwig’ Ahgren. This year, Ludwig smashed Twitch records for the highest subscriber count ever as part of his month-long Subathon, and more recently secured the bag with a YouTube Gaming exclusivity deal. Despite leaving Twitch before the year was even out, he managed to more than double his follower count, and has collaborated with countless other notable streamers. 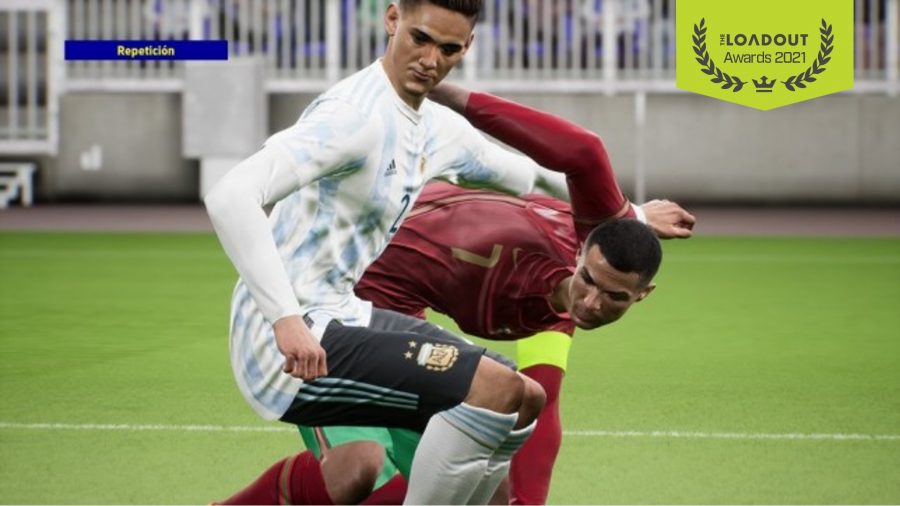 Most ridiculous bug or glitch in a videogame: Everything in eFootball

Ironically, many of this year’s most ridiculous and bizarre bugs came from some of the biggest gaming series. Whether it’s Battlefield 2042’s duck turrets, Call of Duty Vanguard’s disturbing dog butt Team MVP screen, or a tornado of wet floor signs in the Halo Infinite beta, we’ve seen some strange goings on this year. However, we think the deserved winner of this award goes to, well, everything in eFootball.

Konami’s attempt at rebooting the PES series didn’t get off to the best of starts, with players reporting everything from distressing player faces to referees turning into 2D pancakes.

While its many, many bugs brought us a couple days worth of laughter, eFootball was a disaster. 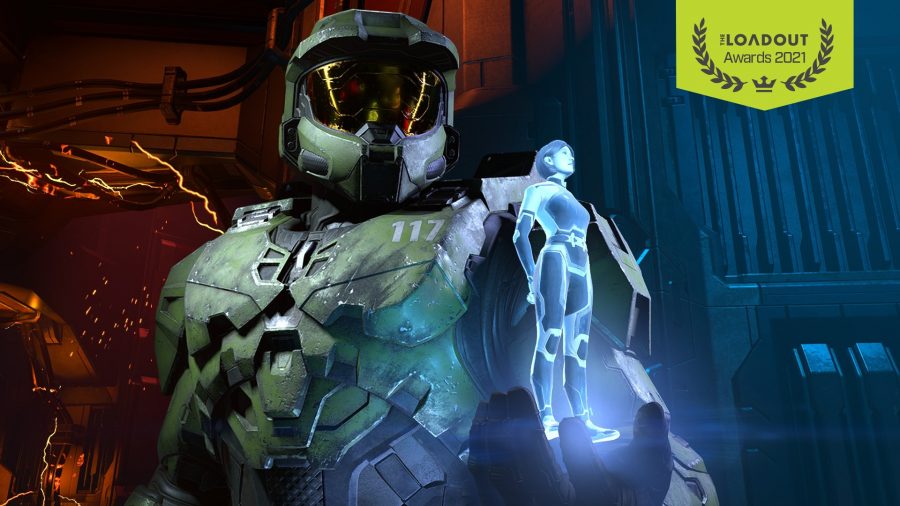 Why is this thing such good value? How can you get so many things for so few dollars? Make it make sense!

We recently ran the math, and over $6,000 worth of games were added to Game Pass in 2021 – and that’s excluding all of the amazing games that were on the service already. Game Pass truly is an inexplicably good bargain full of some of the best Xbox Series X games. 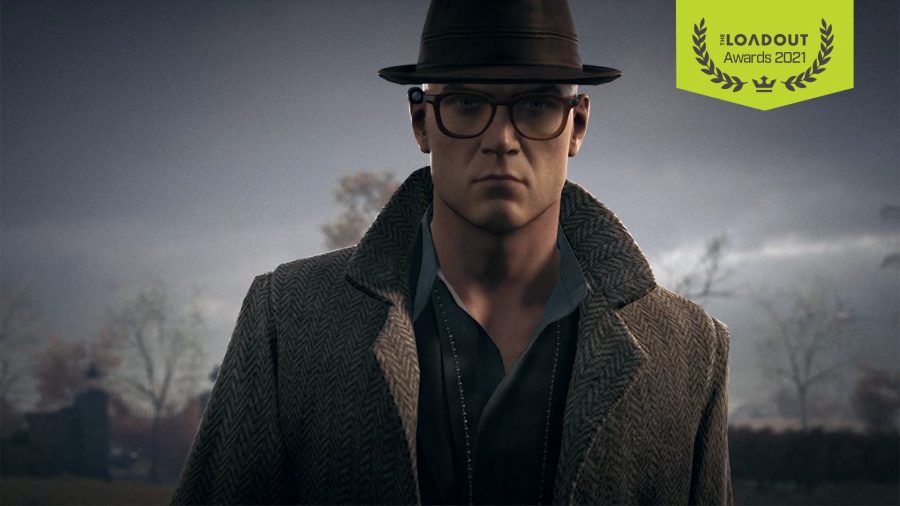 In putting together this year’s The Loadout Awards, we stumbled across a haunting fact that made 2021 seem like a very, very long year indeed – Hitman 3 actually came out this year. Like, what the hell? While you’re always likely to forget about a January release, this one has made us feel especially old. 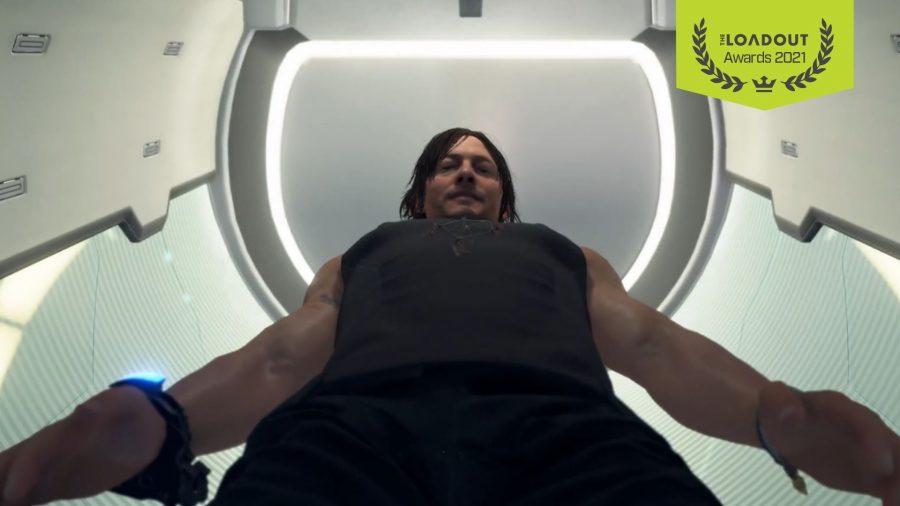 Right, time for the final category. While in most cases the use of the DualSense’s haptic feedback is to immerse you, there was one PS5 game that took that immersion a bit too far: Death Stranding Director’s Cut.

It’s the second award of the night for Hideo Kojima’s masterpiece and it’s all because of some haptic feedback that really takes the piss. Yep, if you go for a leak with Sam Porter Bridges, the DualSense will rumble to represent the flow. This is arguably the weirdest design decision we’ve seen in a game this year.

So there we have it everyone, our extremely prestigious 2021 awards. Wherever you’re reading this, we hope you’re having a wonderful Christmas, and we’ll see you at the same time next year to probably give out countless awards to Elden Ring… Stay safe, folks!