After 30 days of non-stop streaming, Ludwig ‘Ludwig’ Ahgren’s Twitch Subathon is finally over. The event saw the former Super Smash Bros. caster add 20 seconds to a timer for every subscriber to his Twitch channel, with the stream only ending when the timer hit zero. Within days, the popularity of the stream saw that reduced to ten seconds per sub. Even with the reduction, that timer never reached zero.

Ludwig was hardly a nobody before the Subathon, and had become popular through star-studded chess tournaments, Pokémon card openings, and even presenting Twitch game show, Hivemind. But his Subathon, which has broken channel and platform records, will cement his place as one of Twitch’s biggest streamers.

For such a memorable event, we decided to crunch the numbers and present some of the standout stats behind Ludwig’s Subathon. Using a combination of viewership stats from Twitch Tracker and Sully Gnome, as well as community-sourced stats from Reddit user u/raddog86 and his team, here are the headline figures from the 30-day marathon stream.

Ludwig sets a Twitch record for the most subscribers

As you’ve probably seen already, the popularity of the Subathon saw Ludwig set a new platform record for having the most Twitch subs.

During the final day of the Subathon, he surpassed the previous record of 269,154, which was set by Tyler ‘Ninja’ Blevins in April 2018 – a record which has stood unchallenged for three years.

Ludwig’s final total for subs, according to the current listing on Twitch Tracker, is 283,034. This could potentially rise higher, but as Ludwig’s Subathon subs begin to expire, expect to see that number drop..

That isn’t a very headline worthy number, so we think you’re safe to tell people Ludwig gained around one million new followers thanks to his Subathon.

According to community statistics, the total amount of money spent by viewers on subs, bits, and media share during the Subathon totals $1,322,500.

While that sounds like a healthy payday for Ludwig, he will only see a small slice of that figure.

With Twitch’s cut, income and California state taxes, payments to his mods, expenses for the stream, and his charitable donations all taken into account, he’s expected to take away $246,454.19.

Ludwig spent 31% of his Subathon sleeping

Community member u/raddog86 broke down how much of Ludwig’s Subathon was spent doing certain activities or playing certain games.

As you can see from u/raddog86’s pie chart below, the most common thing viewers would see on Ludwig’s channel during the Subathon was him sleeping. Yep, Ludwig taking a snooze in his now iconic red race car bed made up 31% of the content. This was followed by Just Chatting, with 21.5%. 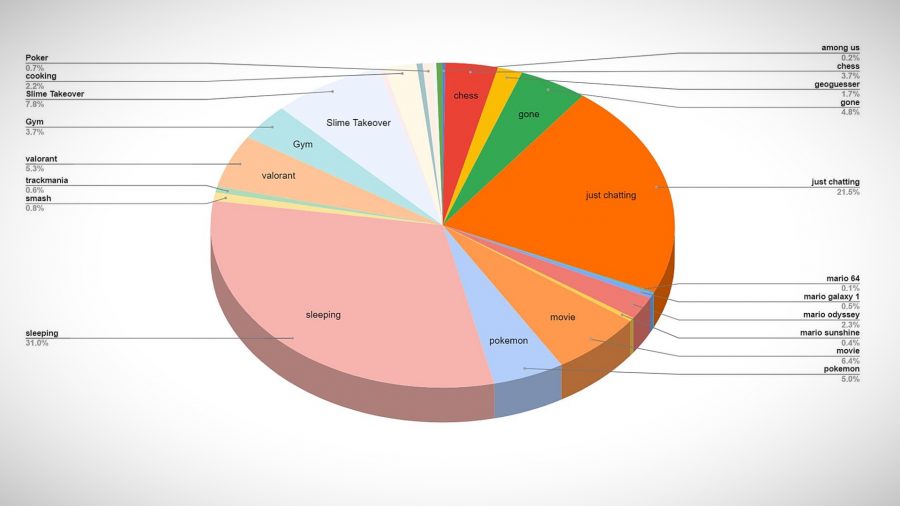 In terms of games, Pokemon playthroughs led the way with 5%, while Smash featured for just 0.8%, despite Ludwig’s background with the game’s esports scene.

This number was recorded on day five of the Subathon. It was crazy numbers like this that saw Ludwig reduce the time added by a sub down to ten seconds.

The lowest the timer ever reached was just one second, meaning Ludwig’s record-breaking was a moment away from ending prematurely. Five gifted subs from Twitch user ‘Demondog86’ saved the stream though.

In what was both the biggest peak audience for the Subathon and his channel since he began streaming, 165,293 watched an emotional Ludwig give one last salute – imitating his ludwig7 emote – as the screen faded to black.

While that is the figure reported by Twitch Tracker, screenshots appear to show Ludwig’s viewership being displayed as much higher on Twitch, with one showing him having 232,000 viewers.

Ludwig’s Subathon has been an event that has not only broken records, but also been feverously followed and supported by the community. He’s pledged to never do a Subathon this long again, and the iconic moment of his final salute, donned in that cream turtle-neck sweater, will go down as one of the most memorable in Twitch history.