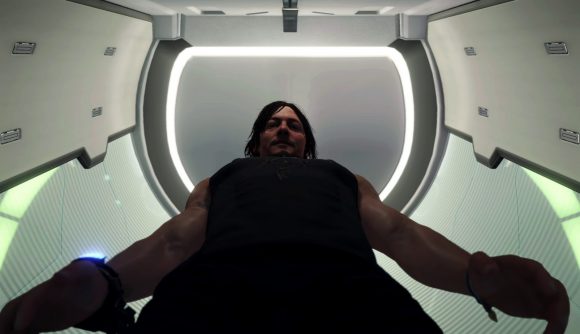 Sony has been touting the DualSense’s features ever since the controller’s reveal last year. It has mentioned how the haptic feedback and adaptive triggers allow you to feel Aloy’s bowstring tighten in Horizon Forbidden West more times than we can count. But, you know what it didn’t mention? Being able to feel Sam Porter-Bridges’ bladder empty as he blows caution to the wind in Death Stranding: Director’s Cut.

Yes, absent from all the marketing and blog posts was this truly next-gen and gross experience. The trigger doesn’t violently pulsate as if you are firing a gun in Call of Duty, but there is enough of a force behind it that when you are urinating in an open field you notice how distinct it feels compared to the more traditional rumble that was in the original game on PS4. When Sam first starts urinating, the trigger’s pulsating starts out strong and gets weaker as his bladder empties.

Death Stranding is full of weird creative decisions, but this is definitely the grossest and most unnecessary use of the DualSense’s haptic feedback yet. And while it might not be a key marketing feature for Sony, it’s the most Hideo Kojima thing we’ve heard in months.

Beyond this feature, the Director’s Cut of the game actually adds a lot of impressive DualSense haptic feedback use, such as the weight of your cargo being reflected in the side of the controller depending on which hand you are carrying it in.

The Loadout managed to capture the haptics on video, which you can watch below to get a sense for how the trigger pulsates as Sam urinates.

This is by far the strangest new feature we have found in Death Stranding: Director’s Cut on PS5 and not what we envisioned writing about on a Monday morning. The game has been received in a mostly positive way so far in reviews, but stay tuned for our thoughts on the game soon.

Who knows, this feature might even help the game on its way to our best PS5 games guide.