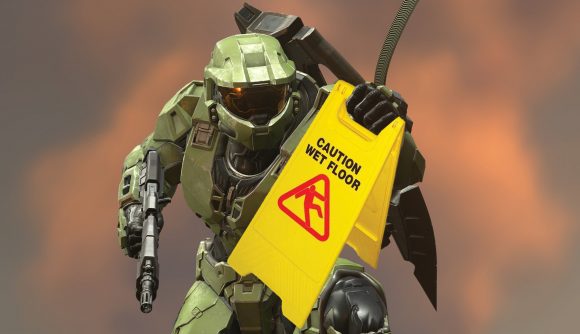 Halo Infinite’s second test flight kicks off today, giving fans of the first-person shooter a chance to test the game and provide feedback ahead of its full release in December. Ahead of actual multiplayer matches going live later on today, players are able to mess around with Weapon Drills and The Academy, and some pretty hilarious bugs have already been found.

Arguably the funniest and weirdest involves endlessly spawning wet floor signs, which results in Twitter user ‘NickMckay15’ being able to create a tornado of yellow plastic signs. 343 clearly doesn’t want you slipping up now, does it?

While we don’t know for certain, it seems like NickMckay15 caused this bug by throwing a bunch of grenades into one particular room on the map Recharge. It isn’t clear if this bug can be replicated every time or if this was a one off, but let’s not worry about all that and just revel in its yellow, plasticky randomness.

Ahead of the Halo Infinite release date, 343 industries will be testing the game more with additional flights. Bugs from the last flight held in late July have already been fixed, including weapons flickering, menu transitions being far too abrupt, and player scores not reliably appearing on the victory screen.

I have found the best bug ever, I AM KING OF WET FLOORS. @HaloSupport @Unyshek @343Postums pic.twitter.com/c0Dg2B5KSO

Halo Infinite has had many slip-ups since its announcement in 2018, including multiple delays. But, hopefully, the game will release in December as shiny and new as a freshly cleaned bathroom.