Imagine waking up on a beach complaining of a wicked hangover only to find you don’t know how you got there, what you did last night, or even what your name is. This is how Arkane introduces us to Colt, Deathloop’s main man, who’s clearly been on one hell of a night out.

But from the get-go, you quickly realise there’s more to Colt’s drunken escapades – in fact, you realise he is in quite a bit of danger as Deathloop opens with a machete being thrust into his chest by a mysterious assassin called Juliana Blake. What follows is a cutscene that sees Juliana toy with her prey, creating a cinematic sequence that really shines, kicking Deathloop off with a memorable, linear, and visually gorgeous opening as you walk right into Juliana’s traps.

But then, about 15 minutes into the experience, after you jump out of a window to reset the loop, information Colt previously forgot about begins flooding back. With this knowledge, the rest of the game opens up allowing you to discover how to break the loop you and everyone else on the island is stuck in.

It’s rare to find a game where everything so expertly falls into place, but Deathloop really does feel like the final jigsaw piece we’ve been missing in an action-adventure puzzle that has taken many years to complete. Arkane has long been a master of the immersive-sim genre but here, the studio really steps up a gear by crafting a game that is both innovative yet perfectly aligned, whether it be the story, visual presentation, soundtrack, or dialogue. 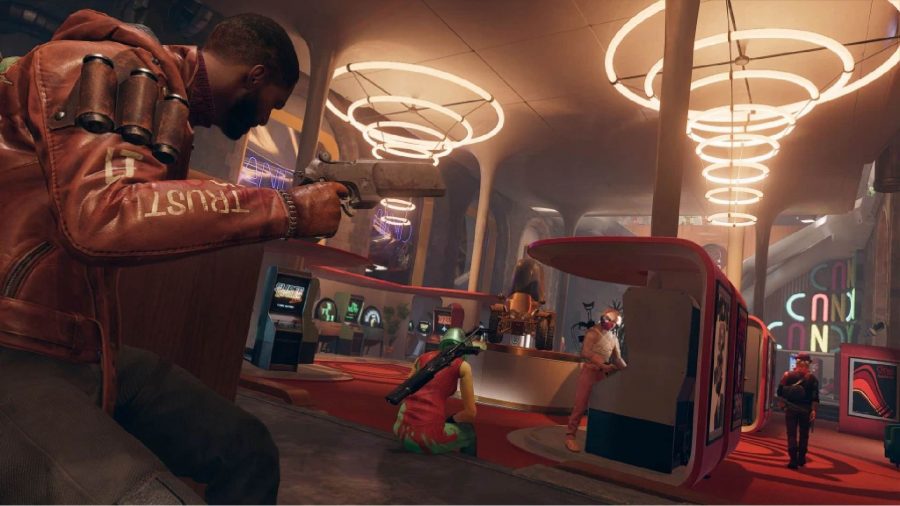 By far one of the highlights of the game is the relationship that develops between Colt and Juliana as Colt starts to learn more and more about Blackreef and his role on the island. Their dynamic is one of the best that I have ever seen on screen.

Both sarcastic and tired of looping for different reasons, the witty self-aware dialogue and performances of Jason E. Kelley and Ozioma Akagha as the rival assassins are one of the strongest aspects of Deathloop. Their outstanding performances in each and every new arc mean you never get tired of going through a new loop, simply because you never know how they’re going to mess with one another over the radio. Their relationship serves another important purpose: to help you learn about each of the eight Visionaries, Colt’s history, and life before he was stuck in a time loop and Blackreef itself.

Spread across four districts, each Visionary has its own itinerary during a standard day in Blackreef. Alexis might spend all his day planning a party in Updaam, whereas nerdy, tech-wiz Charlie moves around from district to district, engaging with other Visionaries, through the four main time periods – morning, noon, afternoon, and evening. You can visit anywhere you want at any time and follow leads for any Visionary in any order – with that entire experience overseen by Juliana who is observing and watching Colt’s every move. 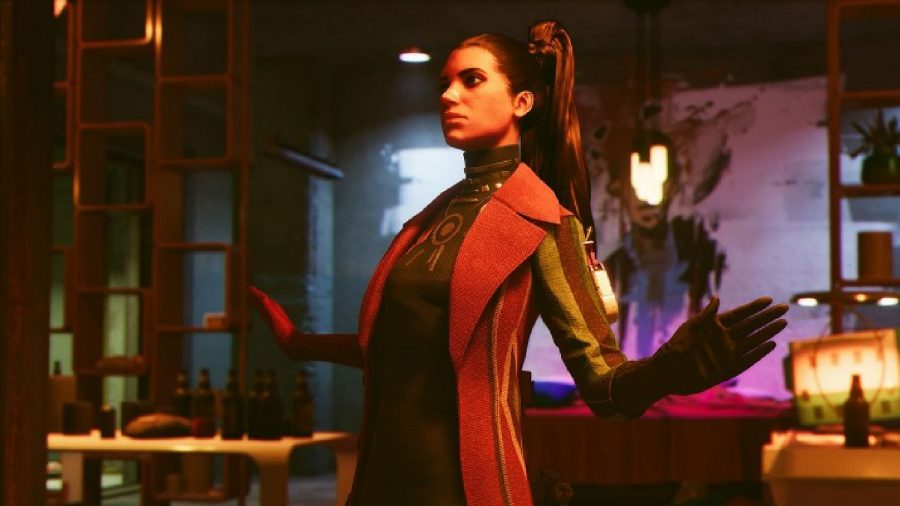 Still, despite the constant threat, these scoping missions are valuable. Colt wants to get as many Visonairies in one place at any one given time, so he can pull off the perfect loop and kill them all in one day – but as you’ve probably already guessed, it’s not easy as it sounds.

Despite all of the information you have to gather, Arkane’s put some mechanics and quality-of-life features in place to stop you from getting overwhelmed. With memorable, comic-like cutscenes that provide recaps on what a Visionary does in their day and how you can best kill them, all the information you need for the perfect loop is at your fingertips. Plus, with a well-thought-out UI that clearly displays information and objectives, it’s easy to stay focused on what you want to tackle.

By the end of the game, you’re able to pull off kills in the blink of an eye, parkour across rooftops, and sneak through hallways like a true speedrunner. This is because, after dozens of loops, you don’t want to kill everyone in a location and meticulously explore each building again, so you visit a district with your objective in mind and aim to get out as fast as possible. 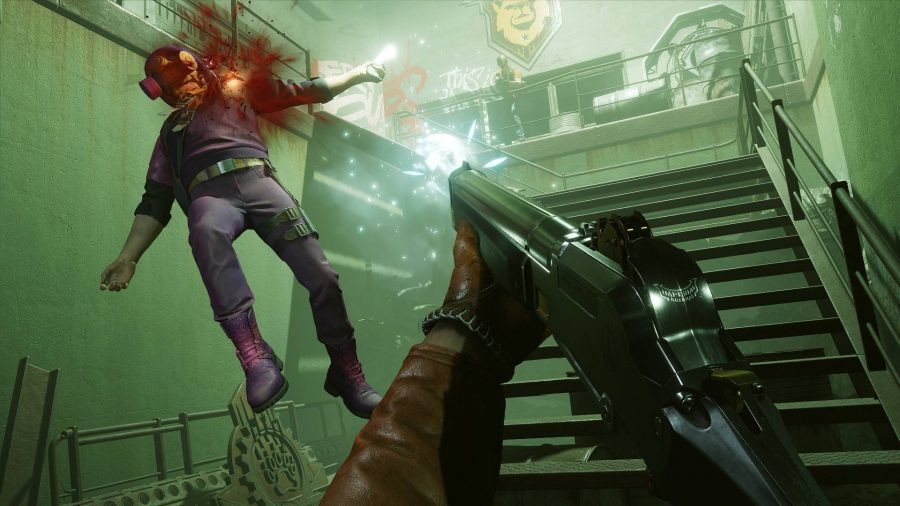 In that respect, Deathloop feels like a Metroidvania, where your new powers unlock new areas. These powers come in the form of new knowledge that allows you to unlock more optimal ways of killing the Visionaries. And because of that, Deathloop is truly innovative, taking a well-known genre’s template and evolving it in a way that I hope will lead to fresher entries in the Metroidvania genre than we have seen in the past few years.

As with Arkane’s previous games, creativity is the name of the game in Deathloop and there are dozens of options for how to tackle a situation. With half a dozen powers to collect that make your job of killing enemies and exploring areas easier, you can combine them with various weapons or tricks to launch enemies off roofs, silence them with a stealthy shot, or sneak up behind them while invisible and snap their neck. 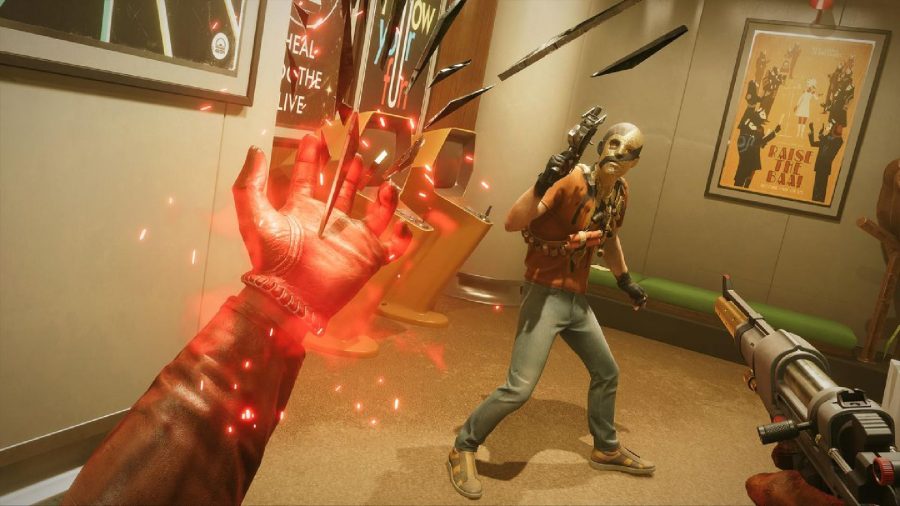 That creativity also extends to the environment, with Colt being able to hack turrets and equipment. One of the coolest moments I experienced was when I discovered a loose firework, that when set alight, would fly through a hole in a window and open a door for me.

With creativity comes customisation and weapons have a lot of variety. They can come in different rarities that feature traits and upgrades – from silencers to higher calibre ammunition. There are even some special weapons that can be found in side quests that can completely change how you play.

All of these weapons are punchy and powerful, enhanced by the DualSense controller’s haptic feedback and adaptive triggers. Mods (called Trinkets) can also be equipped to weapons and Colt himself, which can improve their stats, damage output, equipment, and several other bonuses. 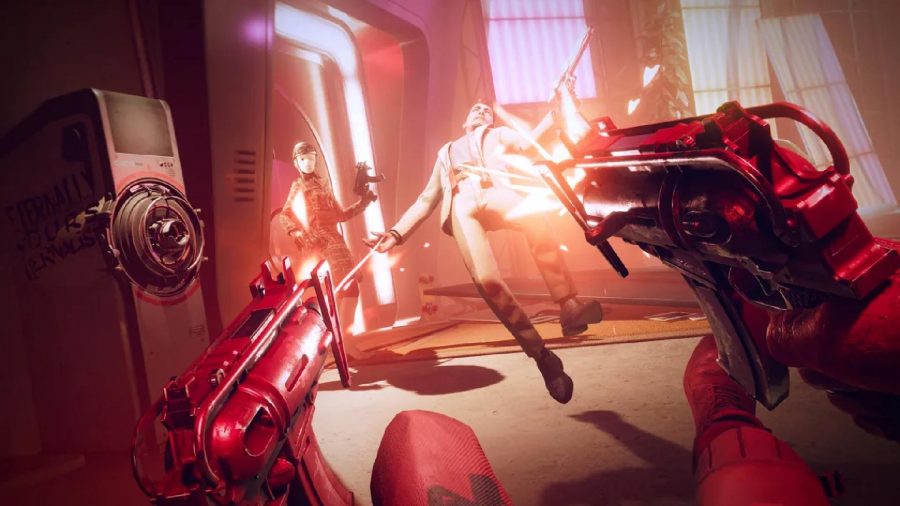 Infusion is also a clever system that makes the game more rewarding as the loops go on. It allows you to bring items over to subsequent loops if you infuse them with Residuum, a resource you can find on objects all over Blackreef and on the bodies of Visionaries. Once you find a weapon and build that suits you, you can essentially build a loadout that will carry over until the next morning. In other words, you can become as familiar with your tools as you can with the environment.

And, spoilers aside, when you get to that final loop, Deathloop becomes a tense, hour-long speedrun that’ll keep you on the edge of your seat. Breaking the loop consists of a nail biting run through Deathloop’s four districts across all four time periods that’ll have you meticulously planning every move to ensure you don’t end up in a scuffle. When you do break that loop, there is nothing quite like it.

However, as already mentioned, there’s always an ever-present threat: Juliana. The intensity in the final run is amplified by the fact that she can invade the district you are in at any moment, locking down the tunnels under Blackreef and your means of escape. Either controlled by another player or the AI, Juliana’s invasion adds yet another layer to each assassination, forcing your hand yet again. 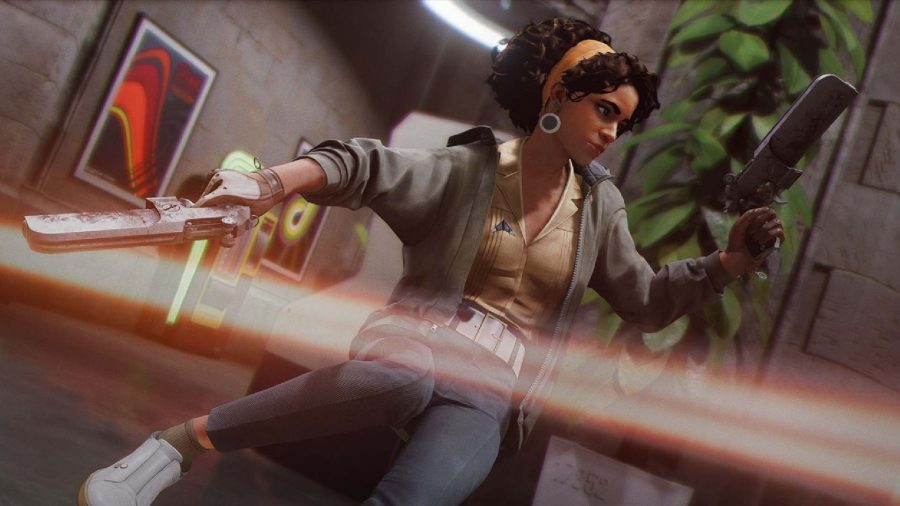 These interruptions can be frustrating at first – especially when you get caught in crowded streets – but things change when you realise you can turn the tables at any point. Instead of letting Juliana hunt you, why not hunt her? At this point, the multiplayer side of Deathloop becomes less of a cat and mouse game and more of a patient duel.

In a game where everything is the same day-in and day-out, Juliana breaks that mould

Once I stuck to my chosen location and began fortifying it for Juliana’s arrival, her presence became more palatable, and I actually started to see why Arkane included them. Regular enemies are quite easy to take down and don’t offer much in the way of combat challenges, but with Juliana, combat becomes much more dynamic and unpredictable. In a game where everything is the same day-in and day-out, Juliana breaks that mould and adds some much-appreciated variety to the loop’s formula.

If you choose to play as Juliana and invade another Colt’s worlds, the odds are stacked against you, as Colt can respawn twice before he dies for good and you only get one life. Beyond some challenges and a number of cosmetic outfits for Colt and Juliana, I didn’t see much that will keep me engaged with this PvP side of the game, but it is still fun to try and disrupt someone else’s assassination attempts. 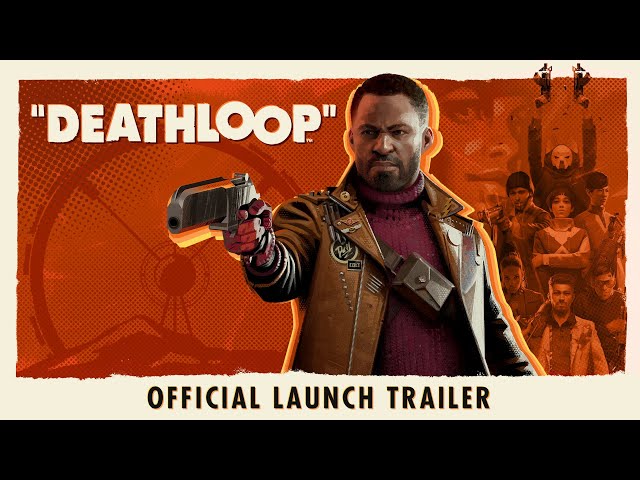 In short, Deathloop is effectively a masterpiece. Arkane has gone where no other studio has gone before and elevated itself in the process. With a fascinating premise, masterful characters, and a lore-steeped world, Arkane takes its immersive-sim history and mixes it with Metroidvania mechanics, creating a game about repetition that doesn’t get boring, tiring, or exhausting, no matter how many loops you have performed.

The only thing that holds it back at launch are some slight performance issues on PS5 relating to frame rate and visual glitches, where an object will bleed through the environment for a flicker.

However, none of these were game-breaking and it’s hard to fault Arkane’s near-perfect execution. There is no game that has been able to even come close to the systems-driven experience, presentation, and set-up of Deathloop. The satisfaction of discovering information, the impeccable soundtrack, and the feeling of being a master assassinator all sit alongside the gameplay and story to create the most innovative and impressive game in years.

Deathloop is Arkane at its best, combining its system-driven immersive-sim gameplay with a unique and fascinating story set-up. Excellent presentation and style, along with fantastic dialogue and character performances makes Deathloop one of the most innovative games in years and a valuable PS5 exclusive.