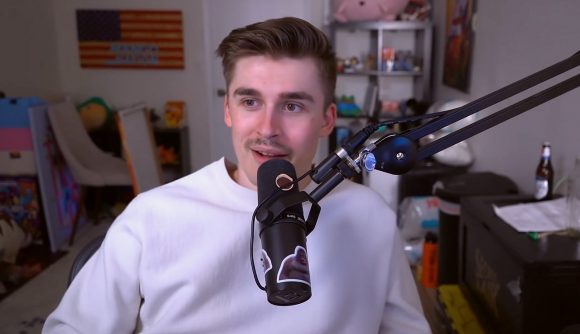 In many people’s eyes, Ludwig ‘Ludwig’ Ahgren was the posterboy for Twitch in 2021. His rise up the viewership charts and live game shows were topped only by his famous Subathon, in which the 26-year-old smashed the long-standing record for the most Twitch subs as part of a month-long streaming marathon.

Now though, Ludwig, like several of Twitch’s biggest streamers before him, is leaving the platform after signing an exclusivity deal with YouTube Gaming, joining the likes of Tim ‘TimTheTatman’ Betar and Rachell ‘Valkyrae’ Hoffstetter on its lineup of streaming talent. While Ludwig says on the Stanz Show Podcast that it was a difficult decision to make, the money secured from this exclusivity deal, as well as there being less pressure to consistently stream as part of his new contract, means he can spend more time and resources on bigger projects and productions – and that’s good news if you’re a fan of Super Smash Bros.

Ludwig, a massive Smash fanatic who during his rise as a streamer has casted and even hosted his own Smash tournaments, reveals that one of his major projects is to throw “the biggest Smash tournament of all time” at some point next year.

“It will be the biggest in terms of entrants and prize pool, for Melee and Ultimate,” Ludwig pledges. He goes on to concede that the project will “probably cost a million dollars.”

Ludwig also reveals that to make these big projects a reality on Twitch, initiatives like his record-breaking Subathon were the only way to be able to raise the money to make them happen. Thanks to his deal with YouTube, he says it will be far easier.

“I was thinking like: ‘This is psychopathic that I’m genuinely considering doing a Subathon just so I can do a cool idea’. Being with YouTube, I can now just totally do that. That is totally chill, because I don’t have to stress about being live and trying to make the money – they just allow me to do those kinds of projects.”

With the highest prize pools in competitive Smash floating around the $150,000 mark – a lot of which is crowdfunded by the community – expect Ludwig’s passion for the esport, and the financial and creative freedom he’s now getting at YouTube, to eclipse that considerably.

While his deal with YouTube marks exciting times for his own community, it also gives fans of competitive Super Smash Bros. an opportunity to get excited too.