Initially, the opening hours of Guardians of the Galaxy didn’t do much to capture my attention. But, as I continued playing and eventually finished the thrilling journey Eidos Montreal has crafted with its latest game, I became intoxicated with its broad range of characters.

It’ll come as no surprise that Eidos Montreal has invested almost all its power in recreating Star-Lord and his band of misfits in a way that’s true to both the comics and the film. The characters are at the heart of this linear, chapter-based story, and it helps create a 15-hour epic that is filled with set pieces and touching moments.

Chaos and havoc follow Peter Quill, and that much is true for his journey in the game. When you start the campaign for the first time, you’re thrown into his world just a few months into the Guardians’ journey, where the team are gelling about as well as you would expect.

The main plot isn’t anything special, but it is a good stage to spotlight the game’s characters. Brought to life by Jon McLaren (Star-Lord), Kimberley-Sue Murray (Gamora), Alex Weiner (Rocket), Robert Montcalm (Groot), and Jason Cavalier (Drax), all five of the Guardians of the Galaxy rightfully take centre stage in this action-packed superhero game, and they share the same traits as the ones we fell in love with in the Marvel Cinematic Universe. Drax is literal, Groot is admirable, and Gamora is blunt but honourable. The supporting cast, which make fleeting appearances, are also just as good, with Mantis being a personal highlight.

The Guardians’ interactions with one another and the wider cast not only advance the plot but also provide some great gags and banter. In one particularly hilarious moment, the Guardians repeatedly use Star-Lord’s toothbrush, providing a gag that stretches across multiple chapters. There are also smaller, more intimate moments, which add layers to each of the characters not yet explored in the movies. 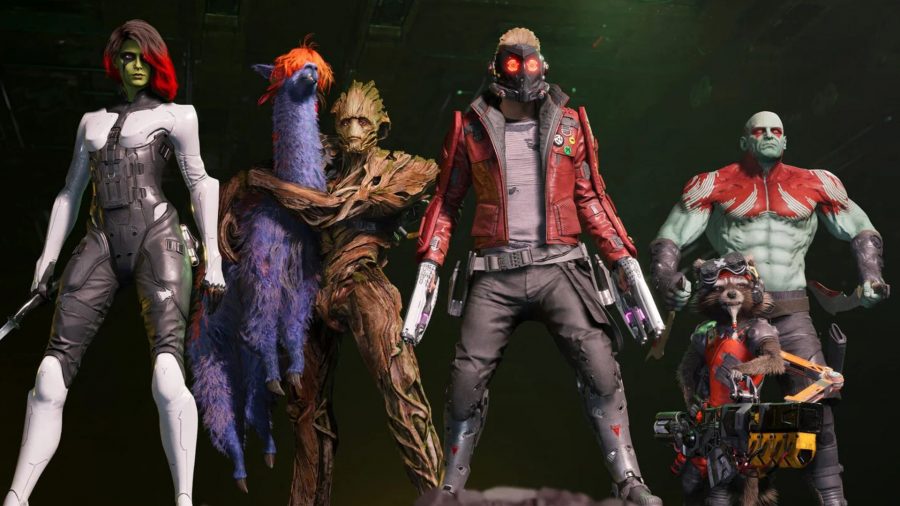 The dynamic between the Guardians was something The Loadout’s Aaron Down was concerned about in his initial Guardians of the Galaxy preview, but after playing through the game in just one weekend, I can assure you Eidos Montreal have nailed it.

The places you visit on your travels are gorgeous, diverse locales

However, the lack of meaningful narrative choices leaves a lot to be desired since they don’t really shape the game in any drastic form. For example, treating a character with disdain or gratitude doesn’t really alter the story in any way as they will always be angry at you, and deciding whether or not to hide a space llama from the Nova Corps doesn’t mean that it will be escorted off of your ship. I personally found the lack of variety in these moments to be disappointing.

As for the gameplay in Guardians of the Galaxy, it might not be innovative but it is engaging. The places you visit on your travels across the galaxy are gorgeous, diverse locales each with its own ecosystems, weather, and wildlife. These Alien planets provide a nice change from the backdrop of Star-Lord’s ship and show off the game’s vibrant colour palette. I particularly enjoyed exploring Knowhere, mostly because it firmly rooted the game in the wider Marvel universe. 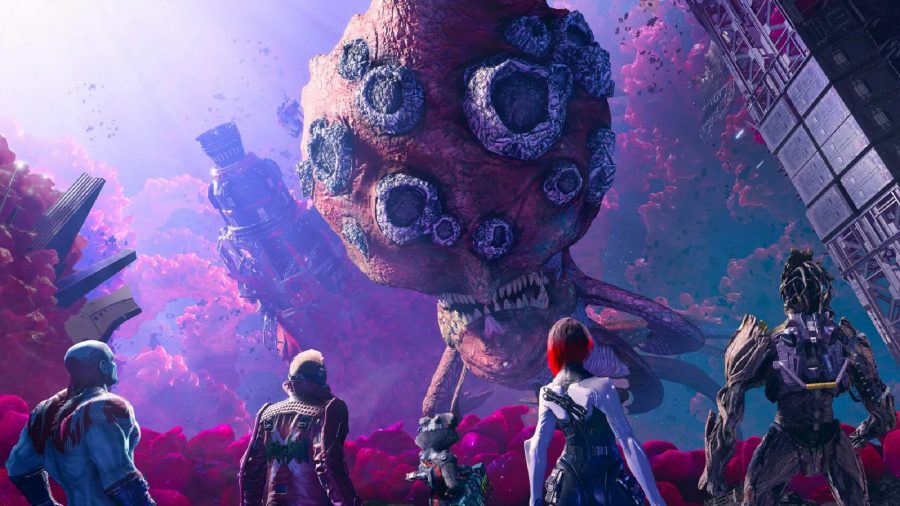 Something that adds to that immersion is the way in which Star-Lord and the rest of the Guardians will mention prior events, battles, and characters in the Marvel Cinematic Universe. There are certain sequences in the game, which I won’t go into detail of to save you from spoilers, that extend a hand out to the wider universe. You might not be able to see what’s going on there, but it helps build out the world in which you’re meant to be exploring.

It is also fresh to play a smaller role in the ongoing wars and conflicts of the Marvel Universe and to hear about these actions playing out from your grounded place in the stars. This immersion into the Marvel Universe is just as good as Insomniac’s Spider-Man games. The world and character building in Guardians of the Galaxy is some of the best I’ve seen from recent linear, action-adventure games, and to top it all off, it’s all encompassed by a kick-ass, blood-pumping, Rickrolling soundtrack of classic hits. 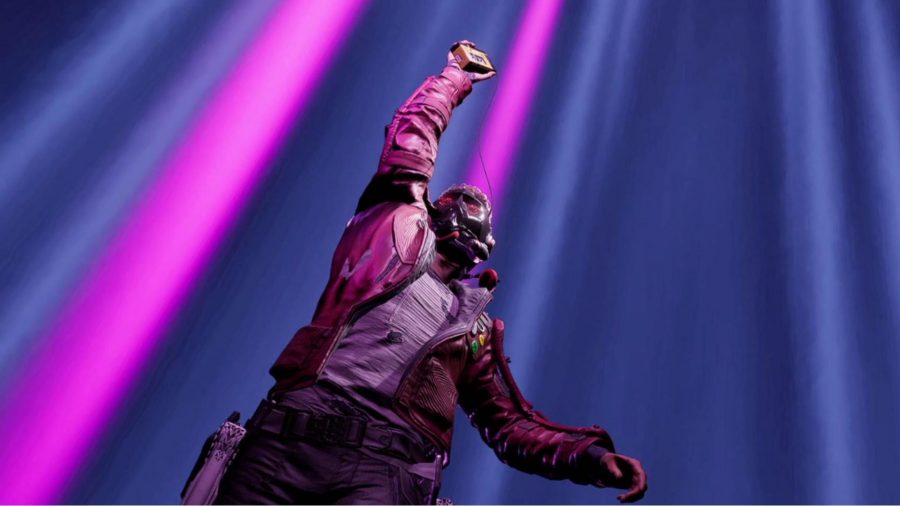 That’s right: as you talk, debate, and fight your way through the game’s 16 chapters, you’ll be serenaded in style by the likes of Starship’s We Built This City and Rick Astley’s Never Gonna Give You Up. That is, at least if you are not playing in streamer mode, where licensed music is cut out from set pieces and replaced by some solid original compositions. But, as you might expect, they just don’t have the same energy that tracks from Tears For Fears and Twisted Sister do. They’re also criminally under used when it comes to set pieces and fail to provide the same backdrop as the licensed soundtrack.

Fighting as Star-Lord, especially when there are some absolute bangers in the background, is fairly straightforward. You’ve got standard melee attacks and blaster shots, but where things get interesting is with combo attacks. If you time things right or perform a certain task – like stunning an enemy – you can call upon your band of misfits to help you out. This’ll vary from quick attacks, where everyone lands a punch, to quick takedowns. 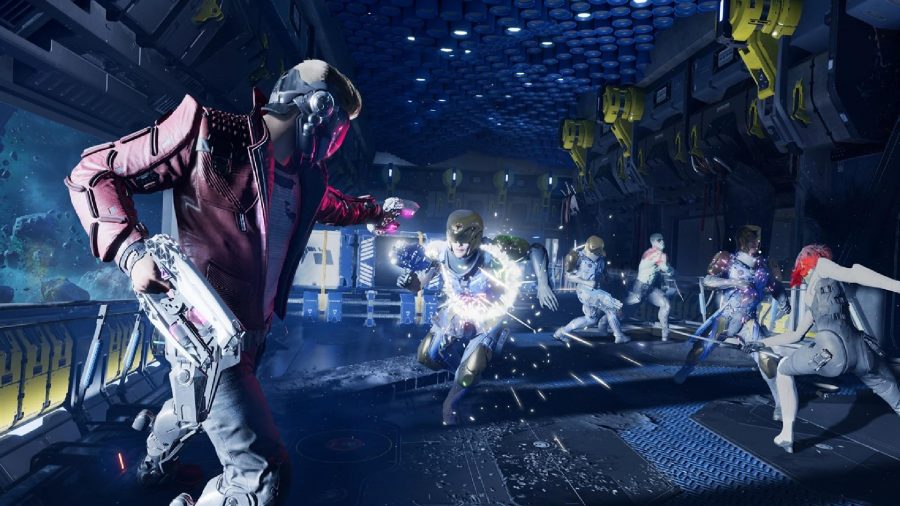 There’s also the added benefit that each Guardian has their own focus on the battlefield: Rocket has powerful grenades that can decimate enemies and an arsenal of weapons, Groot can keep enemies locked down, and Gamora and Drax can focus their attention onto single enemies, outputting large amounts of damage. All of these, when utilised correctly, can lead to combat scenarios that not only feel challenging but satisfying too.

You’ll also be able to upgrade the Guardians’ arsenal as you progress through the campaign. Elemental shots for Star-Lord’s blaster can help stun stronger enemies, and their properties allow you to sever off limbs and chunks of their health.

This can feel overwhelming at times, especially since the game’s combat is basically a toolbox of mechanics and abilities, but when you get used to the system and work out which of the Guardians’ attacks fit your playstyle, you’ll be creating chaos in no time. 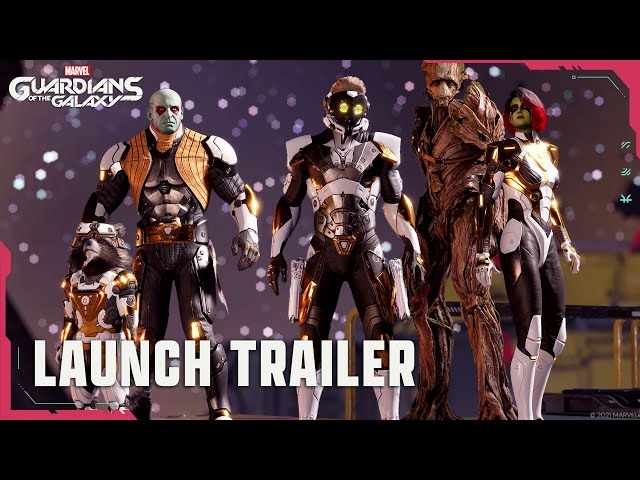 Guardians of the Galaxy might be a Marvel superhero game, but it feels like a cosmic take on Uncharted. The two games share the same formula, character-focus, and design philosophy, and it’s all the better for it.

Guardians of the Galaxy might not be the most innovative game, but it offers some of the best characters and performances of the year, a heart warming story about growth and friendship, and some great levels.

The game is, ultimately, one of the biggest surprises of the year and I’m already excited to see what Eidos Montreal can do with Marvel next.

Guardians Of The Galaxy Review (PS5)

Guardians of the Galaxy shines when it focuses on the characters and the world around them. It might not be the most innovative game this year, but it excellently executes the tried-and-true linear action-adventure formula to deliver a great single-player experience.