When I first laid my eyes on Marvel’s Guardians of the Galaxy at E3, I was incredibly excited. Since the Marvel Cinematic Universe first introduced me to these raucous rogues, and the partnership between Marvel and publisher Square-Enix was announced, I’d secretly hoped that we’d see a game with Peter ‘Star-Lord’ Quill and co as its subject matter.

Of the gameplay footage shown, two things clearly stuck out to me – firstly that the combat looked like a melting pot of about a thousand different things, and secondly that our protagonists wouldn’t shut the hell up. It was big, it was loud, but I worried that Eidos-Montréal was going too hard at making the Guardians experience way more verbose than it needed to be.

Having recently had the opportunity to play through the game’s fifth chapter – which takes place roughly four hours in – I still retain some reservations about just how much noise there is, which at times drowns out what is a very solid gameplay loop.

Having just escaped from Lady Hellbender’s fortress – though why you would ever want to leave the giantess’ company knowing she could step on you and turn you into a puddle of goo is beyond me – Chapter 5 begins with the Guardians aboard Quill’s M-class ship, the Milano. 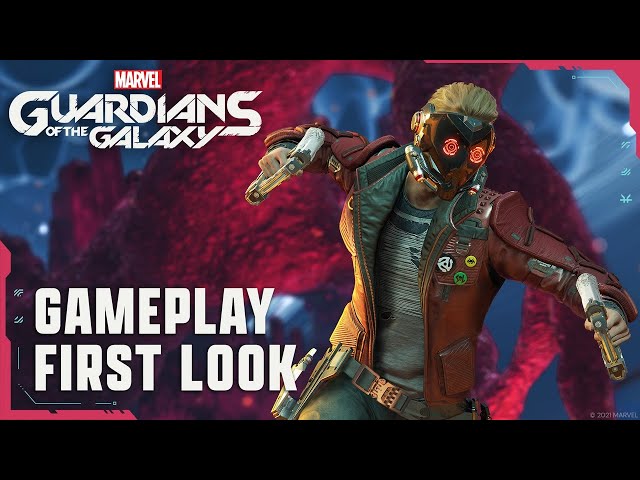 Now that the team has acquired the credits to pay off its debt to the Nova Corps, Quill is eager to head over to Ko-Rel and get the Kree captain off their backs. However, with the ship once again in desperate need of repairs after what can only be described as a funky blue alien llama chewed through a chunk of it, Rocket implores his leader to use the funds to give the Milano the TLC it needs. Unsurprisingly, he is overruled by the group.

The devs have spent time thinking about the Guardians’ backgrounds

We can see from this how disjointed the Guardians are, with a lack of cohesion despite each member having their own best intentions giving off the vibe of a ragtag team instead of a homogenous unit. I was somewhat disappointed that I wasn’t given a choice of whether to opt for Quill or Rocket’s idea, though it’s worth remembering that the choices made within Guardians of the Galaxy exist within an ultimately linear narrative of Quill’s design.

With that said, there are choices to be made and consequences to deal with. As the not-so-noble leader of the Guardians, Quill must carefully consider how and when to interact with his crew to keep morale high. While failing to do so won’t lead to some sort of bad ending, it will impact the availability of Guardians when it comes to heading out on missions. This has big combat implications, which becomes clear later on.

After setting a course for the Nova Corps station, you can choose to either set off immediately, or spend some time exploring the slightly worse-for-wear ship. It’s a pleasant reprieve from what we know will be an explosive adventure, as you can mooch around each Guardian’s living space and consume the easter eggs hidden within them.

There’s a ‘Sarcasm for Dummies’ guide in Drax’s room and a pair of handcuffs that definitely weren’t used to apprehend space prisoners in Star-Lord’s – making it clear that the devs have spent time thinking about the Guardians’ backgrounds. 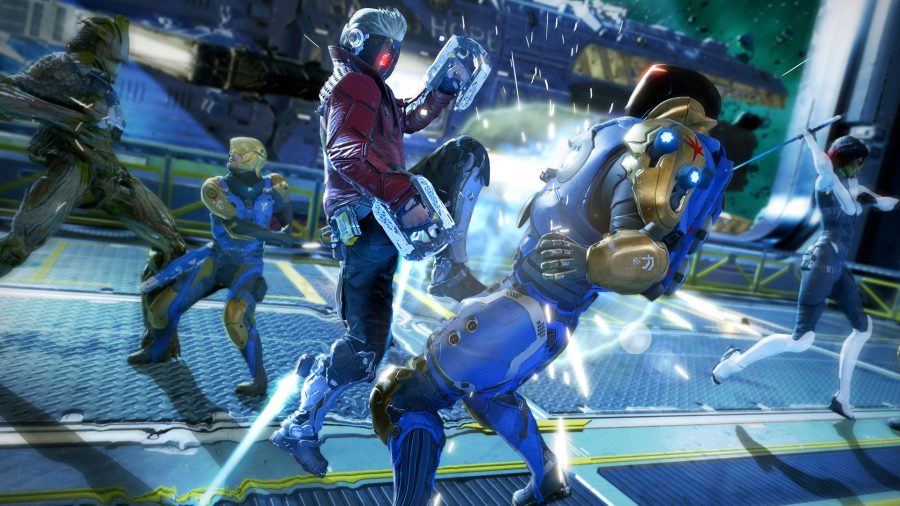 Clearly, there are major characterisation crossovers with the Marvel Cinematic Universe, though there are also nods to the comics – Drax for example is referred to as a tactician by Quill, contrary to Dave Bautista’s more meat-headed interpretation in the films. This is to be expected, seeing as Guardians comic writer Dan Abnett was brought on board as part of the development process.

Interacting with certain objects in each room prompts the respective team member to come and have a chat with Quill, opening up some pretty lengthy dialogue options which not only provides oodles of backstory for each character, but can also provide context to some of the characters we are perhaps less familiar with. Gamora’s own past with Ko-Rel, for example, helps deepen the contrast between Quill’s seemingly more rose-tinted perspective of her, and reality.

Facial expressiveness in these cutscenes are reminiscent of Mass Effect: Andromeda

With that said, what should be engaging snippets of new lore are marred by wooden-faced animations. Facial expressiveness in these cutscenes are reminiscent of Mass Effect: Andromeda. It’s a shame really, because the voice work behind each and every character is spot-on. Conveying the dynamic between the Guardians authentically is a major make-or-break point for the game’s success, and both casting and writing are well-executed – even if some of the jokes don’t quite land. Then again, do Quill’s quips ever?

As the Guardians finally head over to the station, they quickly find that something is very, very wrong. The gang are greeted by hostile Nova Corps forces which appear to be brainwashed, launching me into my first combat encounter. 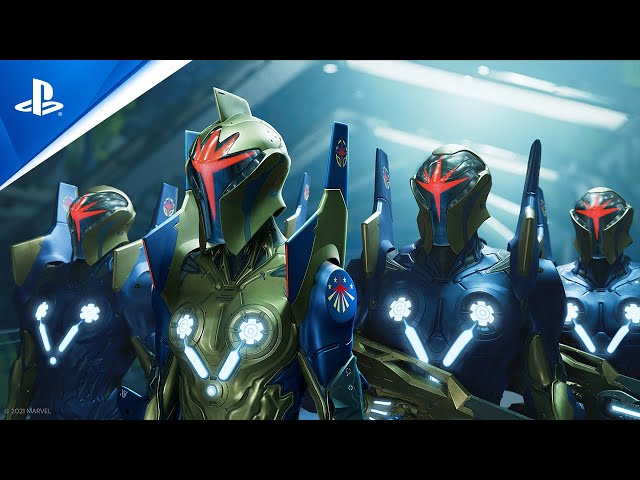 When it comes to the combat systems at play, there’s a lot going on. Guardians comes packed with different abilities Quill and the gang can learn, each of which can either be spammed off cooldown, or used more tactically to counter certain enemy types. Groot’s speciality is crowd control, touting abilities which can lock enemies down or even knock them up. When combined with Rocket’s big area of effect damage, you can cleave down even the toughest of packs.

Oh, the puny little Terran can’t take down the big bad mob? Good thing you have the deadliest assassin in the galaxy in Gamora and Drax the Destroyer to sort that for you. Indeed, in Guardians of the Galaxy, mastering who to utilise in specific scenarios and when to deploy their abilities is key to clearing the game on higher difficulty levels. I was initially worried that the support system would add clutter to the combat loop, but I came out of the hands-on really impressed by its intuitiveness and fluidity.

Quill also has some extra tricks up his sleeve in the form of perks – specific upgrades which can be purchased at Rocket’s workbench – that can help the Guardians’ leader become just as dangerous as his teammates. One perk allows him to use his visor to scan enemy health bars, while another allows him to fire a charged blast which stuns shield-bearing mobs.

There’s also an active reload system resonant of Gears of War’s, which juices up Quill’s Quad Blasters’ next magazines. Then there’s Elemental ammo that can, for example, freeze enemies (or select parts of the environment) and set up easy executions. Sometimes Quill will perform a solo finisher, and in some instances one or more of the others will join in when the enemy’s staggered.

While combat really is great fun thanks to a lot of these systemic inclusions, it can also become overwhelming in larger encounters. Managing multiple types of cooldown – abilities, elemental ammo, and blasters – while being subjected to all sorts of visual effects as well as the constant yammering of the Guardians is a lot to process. 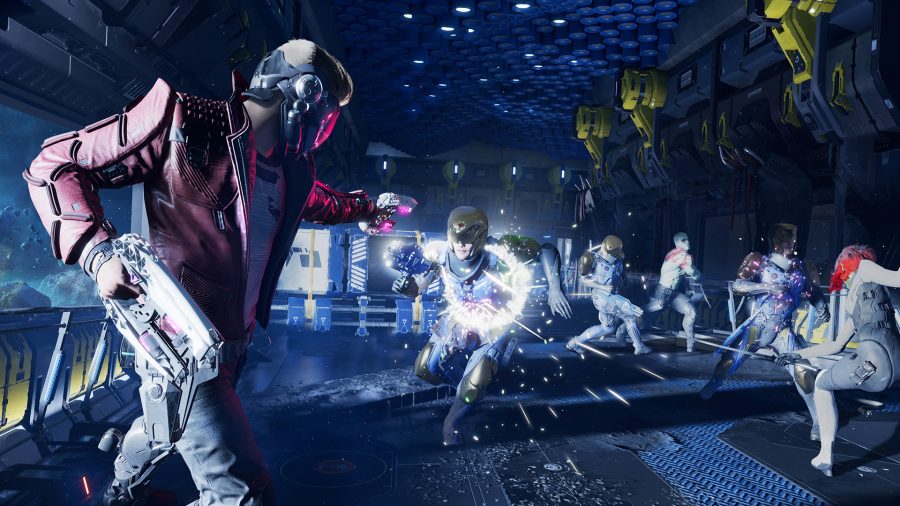 At points combat became muddy for me because I found it difficult to focus on what to hit next. Again, this could just be due to being dropped in later in the game, after most will have gradually acclimated to the experience, but I nonetheless feel that there are aspects of the combat loop – especially the audiovisual noise – that can be reigned in.

The Huddle system, which boosts the Guardians’ combat prowess when the combat meter is filled, is another good example of where Eidos-Montréal can perhaps trim things down, though for a different reason. In the original E3 demo, Quill simply raised his Walkman, hit play, and let the diegetic destruction ensue.

In the demo I played, Huddles have been expanded so it now sparks a minigame where, if Quill selects the correct dialogue option to hype up or calm down his comrades, the whole group gains the buff. However, if he chooses incorrectly, then only he will get amped up. Although I get that this is another attempt to home in on the Star-Lord experience, this, in my own experience, came across as fairly gimmicky, and the novelty wore off quickly. It also diminishes the flow of combat as a Huddle can take ~10-15 seconds to clear. 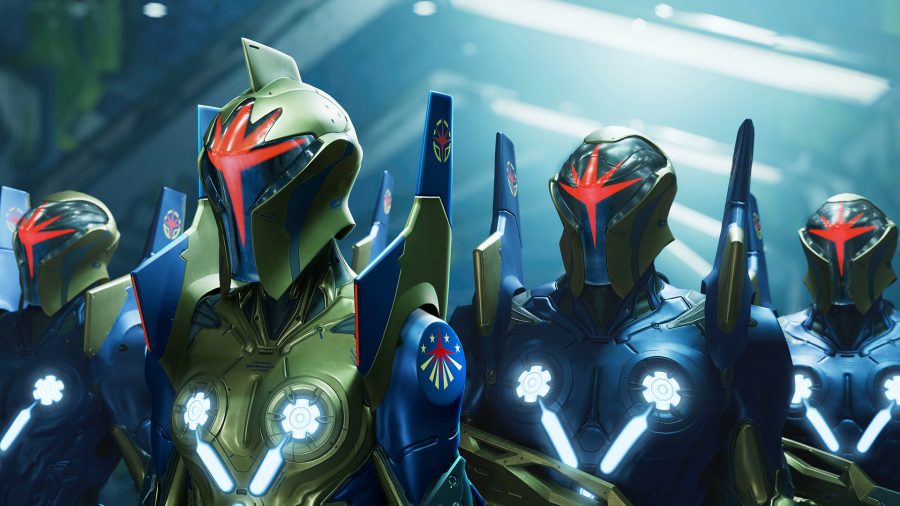 The short time I spent with Guardians of the Galaxy was a real rush. Eidos-Montréal has done a great job so far of encapsulating what makes the modern iteration of the Guardians so iconic, with its own unique twists here and there.

In fact, with all the fun little combat mechanics, puzzle sections, and other oddities baked into its systems, it really does feel like Star-Lord has gamified his world and I’m just living vicariously through it. With that said, the seemingly-relentless pursuit of providing the ultimate Star-Lord experience may come back to bite the devs, as some elements can feel superfluous, and the overall experience can at times be overbearing.

Should Eidos-Montréal make any final tweaks leading up to the game’s October 26 release date, then it should chiefly do so with the moniker ‘less is more’ in mind – even if it is the flarking Guardians of the Galaxy we’re talking about here.