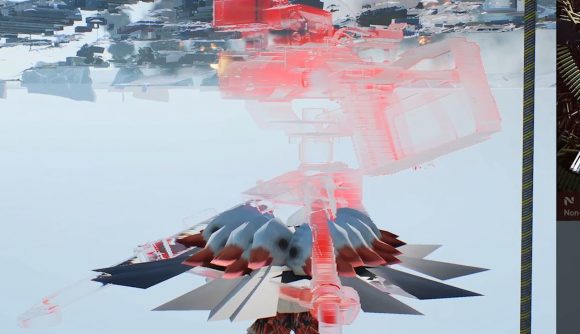 If you’ve had a peek at the official Battlefield 2042 forums, you’ll have spotted the developer’s ever-growing list of bugs found in game. On that list are things like rubber banding linked to Proximity Sensors, balancing problems, and Ranger malfunctions. Now it looks like DICE has another, more curious bug, to add to the list: unintentional ducks.

While playing the game for our Battlefield 2042 review, we came across a bug which shows the underside of one of the Battlefield 2042 specialists gadget. After getting blown up by a M1A5 tank, the kill cam appears to clip with the environment, then zooms in underneath a Boris sentry gun.

There, seemingly keeping the gun tethered to the ground, are ten duck heads bobbing along in the snow. These cannot be seen from the ground (we’ve checked) and can only be seen from underneath the map. This bug took place on Breakaway – the Battlefield 2042 map with the penguins – but they don’t look like the cute little critters you can find trudging around in the snow.

So what the hell are they and where did they come from? Who knows. Adding to the puzzle, the ducks have been spotted a handful of times by community members in the last couple of days. One person has even gone as far as to claim it could be their spawn point – there are, after all, dozens of these guys flying around the map at any given point.

This might be a bug that’ll be patched out soon in one of the next Battlefield 2042 updates, but we reckon it should stay. After all, the best bugs make for quacking great features.