If you are one of the new players hopping into Elden Ring and experiencing your first FromSoftware game, you are in for a surprising and tough next few hours as you learn the game and its mechanics. But, you can find some of the best weapons in Elden Ring in the early game, which will help you get through the tough moments during the opening hours.

The early game of Elden Ring is packed with tough fights and challenges, including the main boss order, a number of minibosses, and the first major challenge of the game, Margit, the Fell Omen. If you are particularly struggling against him, we have a specific guide on how to beat Margit the Fell Omen in Elden Ring.

A lot of our tips for new players will help you out with getting to grips with the game. But, one key ingredient to succeeding in FromSoftware’s games is to find a good weapon. And, below you can find some of the best starting weapons for the early game in Elden Ring.

Here are a few suggestions for the best starting and early game weapons which you can find in Elden Ring: 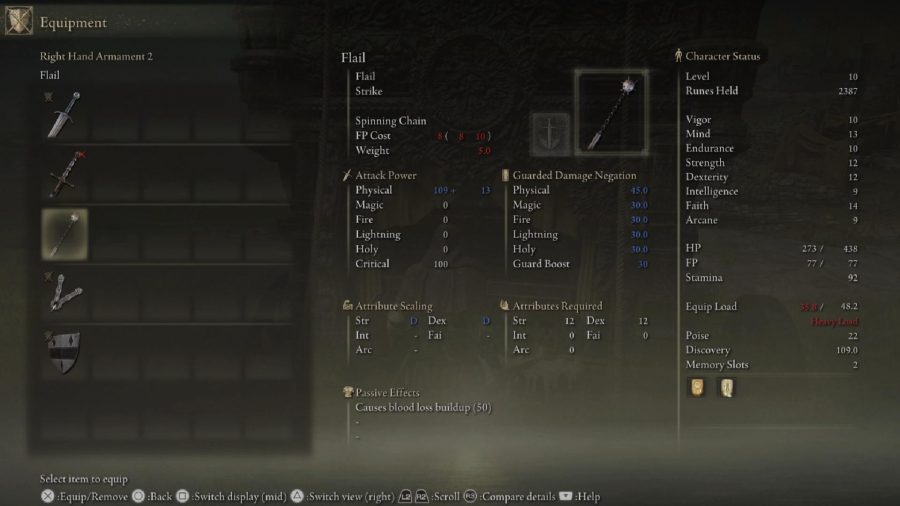 The Flail is a really strong weapon during the initial trek through Limgrave, Stormhill, and Stormveil Castle. Consecutive hits with the flail will build up bleed damage. And, after a number of successful hits, you will slice off a chunk of an enemy’s health bar as they reach a certain level of blood loss. Usually, this is about five to ten hits for most normal enemies. Bosses require far more hits.

The Flail’s main downside is its lack of range, however good positioning and dodging can mean that you don’t need to worry about that. The extra damage from the bleeding damage can be the difference between life or death against some enemies and bosses.

It can be picked up in one of the carts at the Gatefront Ruins, just by where you pick up your horse Torrent. 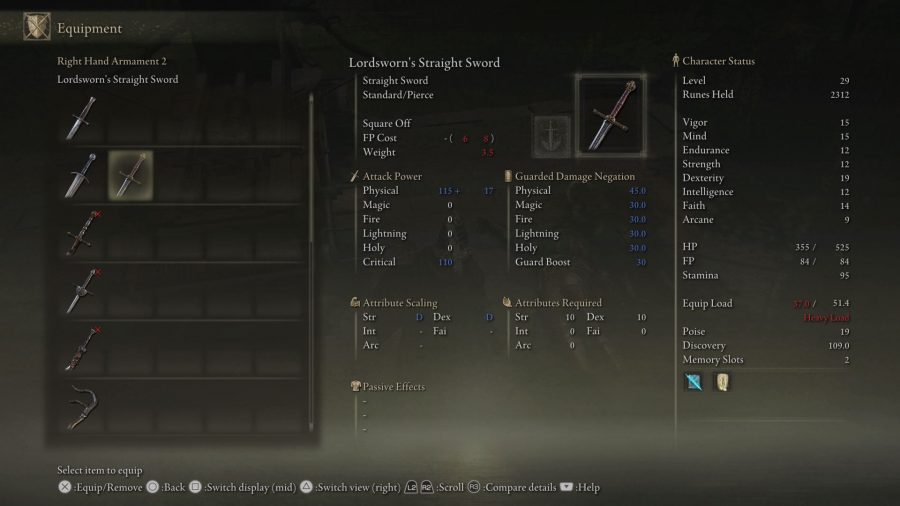 Lordsworn’s Greatsword can be picked up by slaying any of the knights in Limgrave or Stormhill as they all have a chance to drop it. If you haven’t found it yet, farm the soldiers until it drops randomly.

The straight sword comes with some high stats for this early into the game and scales with both Strength and Dexterity so chances are you already have enough power to make it usable.

This is a great all-around weapon for the early game in Elden Ring and is best suited for someone who wants a traditional fight and is not looking to experiment in the early game. 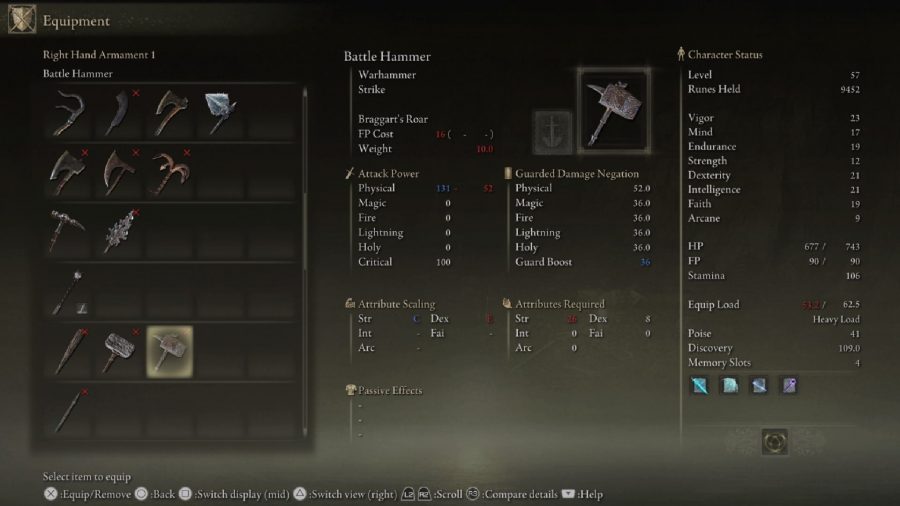 If you are looking for a hefty weapon to take with you into the opening boss fights of the game, then the Battle Hammer is a good weapon to pick up.

Packing high power with a powerful skill that raises your attack, defence, and stamina recovery speed, the Battle Hammer is the go-to early-game weapon in Elden Ring for a player who wants to make an impact with their swings. Of course, be aware that your attacks are slow.

The Battle Hammer can be found be beating the Grave Warden Duelist boss in the Murkwater Catacombs, which is located along the river leading up to Stormhill’s eastern edge. 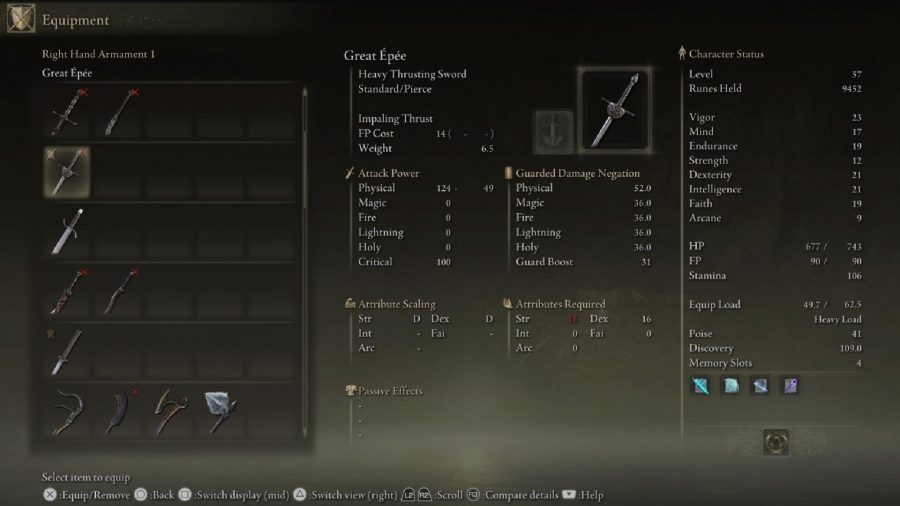 The Great Épée is a strong choice for those players who prefer weapons that focus on thrusting and pushing enemies back instead of swiping. As such, this weapon isn’t great for large groups of enemies, but you do have a few swings that can hit multiple attackers.

Its skill is also handy, overpowering enemy shields and breaking their guards to allow you to follow up with subsequent hits.

The weapon can be found in the south of Limgrave, in a chest in a small enemy encampment which is located just above the hill that slopes downwards. It is past the main lake where you can attempt to beat Flying Dragon Agheel. 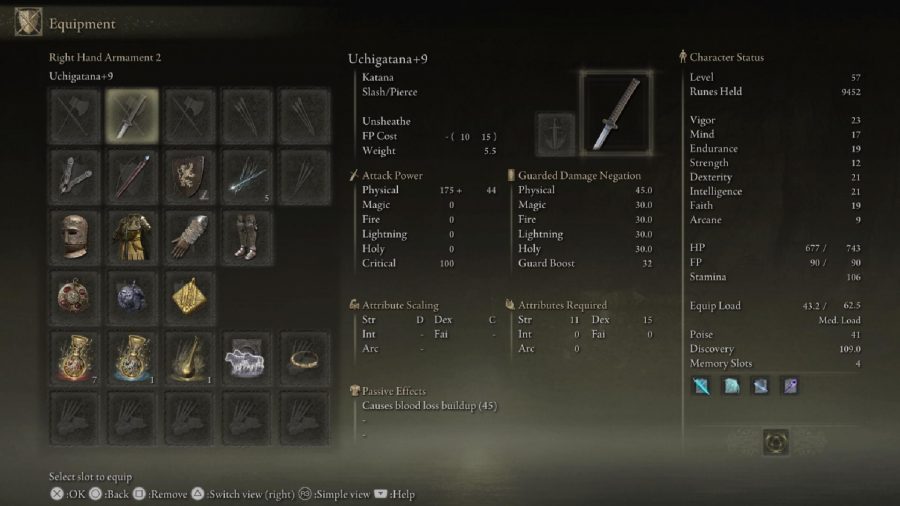 Finally, we have the Uchigatana, which can be found in the Deathtouched Catacombs dungeon. This dungeon is found along the main road that leads east from Stormhill Shack, through the forest, and just before you get to the bridge.

The Uchigatana is effectively an upgraded version of the Flail from earlier. It is stronger, offers more range, and has a better skill, allowing you to pull off powerful heavy attacks that can stun most normal sized human and beast enemies.

You can try to get to the Deathtouched Catacombs from the very start of the game and it isn’t too much of a struggle. On top of that, it is reliable throughout the entirety of the game, so if you want to keep it as your main weapon, you absolutely can.

That covers our suggestions for the best starting weapons and early game weapons in Elden Ring. For more tips and guides, read through our Elden Ring walkthrough which is packed with useful information.