With a dozen different attacks, fast follow-ups, and a seemingly relentless drive to crush you into the ground, Margit is one of the toughest early game challenges in a FromSoftware game to date. Felling this boss is so momentous, there are even Elden Ring trophies commemorating the occasion. This boss doesn’t offer the player any breathing room and it is no wonder that you can skip the entire Elden Ring region of Stomeveil Castle by going around it. Margit will put a lot of players off.

But if you don’t want to skip Stormveil Castle in Elden Ring, you can take on Margit with these tips. Hopefully they will allow you to beat Margit the Fell Omen in Elden Ring relatively easily.

Elden Ring how to beat Margit the Fell Omen

This Margit The Fell Omen boss guide will give you some key tips when it comes to taking down the boss. However, in order to beat Margit the Fell Omen in Elden Ring, you will need to spend a lot of time learning his attacks. The tips for beating Margit are as follows:

As we mentioned, Margit is very erratic and unpredictable, possessing a lot of different attacks that only expand as the fight goes on.

During the first phase his range of attacks is rather limited. If he jumps towards you, dodge behind him to land a few hits. While behind him, watch out for when he twists to his left side, as he is about to tail swipe you. Dodge backwards to avoid this attack.

When it comes to standard attacks, he has a low sweep which can be rolled through and a two-hit combo that starts with an uppercut with his club. Dodge the swipe by rolling to the side and then continue moving around him in a tight circle to avoid his follow up stab into the ground. The optimum place to be is by the back side of his left leg. 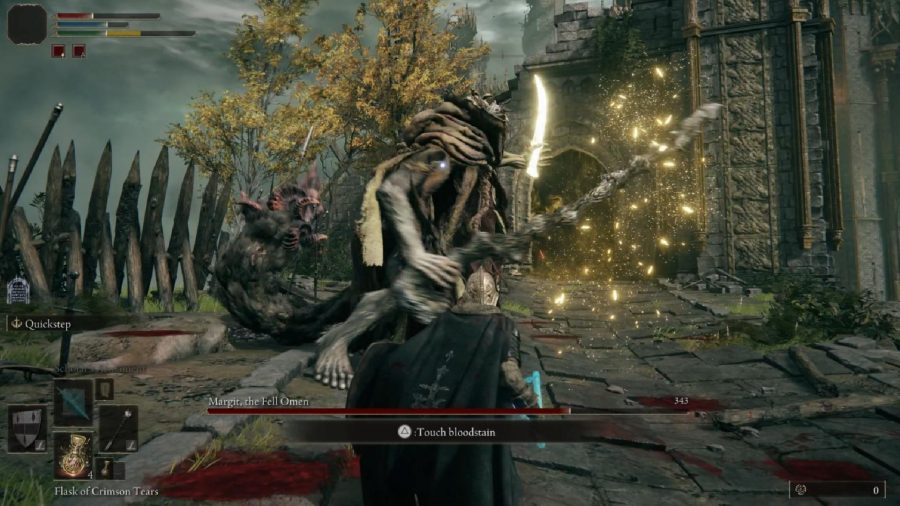 His four-hit combo involves a sweep from above on the right-hand side of him this time. He can follow this up with two short knife swipes using a magic dagger. This can be blocked by holding up your shield. The final attack is a large slam, which can be avoided by rolling around Margit.

This combo can also be shortened to finish on the swipe or the dagger attack. One key tip is to try to block short combos, as it allows you to get in and land some hits where you otherwise wouldn’t be able to.

The short dagger attack can also be trigged if you are standing by his left leg. On top of that, this combo can switch out the slam attack for a jump backwards, where Margit will fire a magic arrow at you which can be dodged by rolling or moving to the side.

He can also fire magic arrows at any point from a distance so be sure to keep an eye out for those. 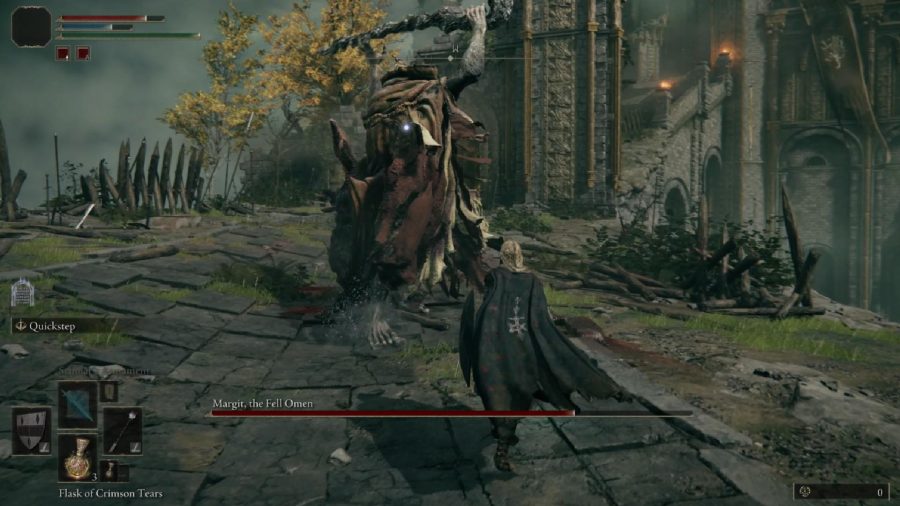 If Margit raises his weapon above his head and holds it with both hands he is about to do a charge attack. If you are standing close to him, this will be a swipe you can roll through and around him, landing some hits.

If he charges at you from a distance he will perform the same attack, which can be dodged in the same way. However, in this instance, it will be followed up with a spin immediately after. This attack can also be rolled through, but you have to wait to roll until he is about to swipe, rather than when he jumps off the ground to dodge. After this attack, you can go in for a punish.

This attack is particularly hard to learn, however once you do it is very easy to punish Margit for using it, landing three or four hits. Alongside this attack, the easily punishable attacks include the jump, and the combo which ends in the slam. 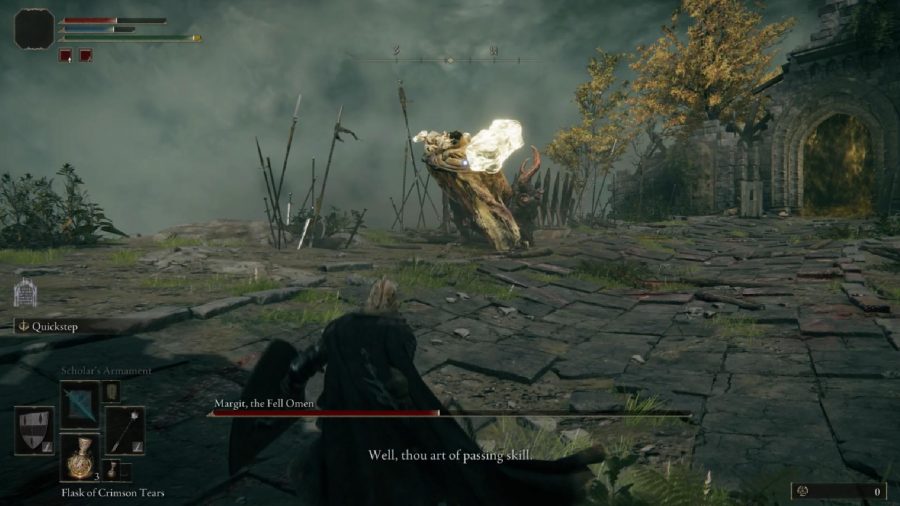 Moving onto phase two of the fight. At about two thirds of his health, Margit will pull out a magic hammer, opening this phase with a swipe and large slam after jumping in the air. This is another punishable attack and can easily be dodged by rolling towards him and to the side just as he begins to fall back down to the ground. All of his attacks from the last phase can also still pop up here.

If Margit fires two arrows at you, chances are he will follow it up with another hammer slam, which can be punished in the way we mentioned above.

Margit can perform a thrusting stab if you are at a medium distance from him with a magic sword. This can be dodged by rolling into him and under the dagger stab. He will follow this up with multiple other stabs and hits. But, if you continue rolling around his left side, you should be able to dodge most of them. 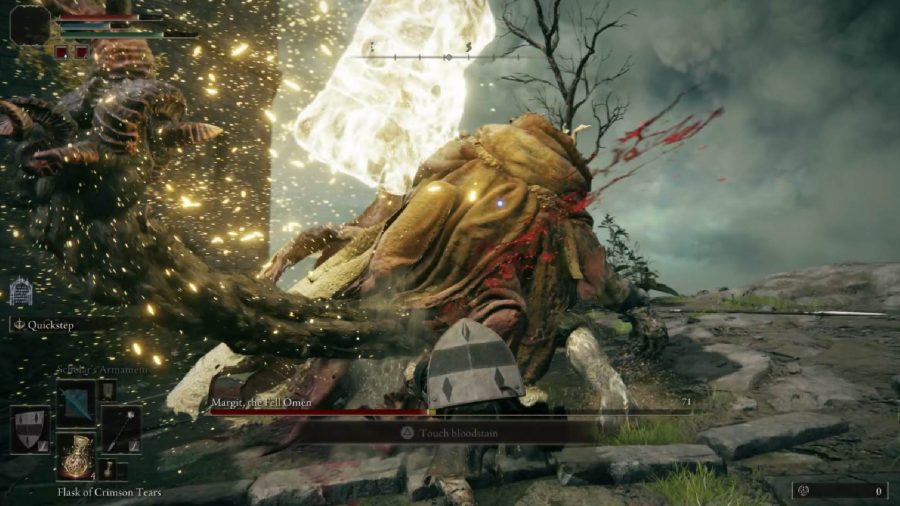 A deadly three-hit combo in this phase involves two strikes with his summoned sword, before stabbing the ground. It can be incredibly hard to dodge this attack so the best plan is to block the first two hits and try to dodge the fast follow-up strike into the ground.

If he pulls out his hammer while you are by him, you are going to want to dodge to the side. However, the side you dodge is up to whether or not you are positioned in front of him. If you are directly in front of him or against his left side, you want to roll through the hammer swing into the left side of him, so you end up behind him.

If you are close to the right side of him, do the same but to the right. This attack is incredibly deadly and a pain to avoid. It can be hard to judge when you should dodge, but you generally want to wait until just before he begins swinging. If you do take a hit, this is one of the times where you can back up and heal. 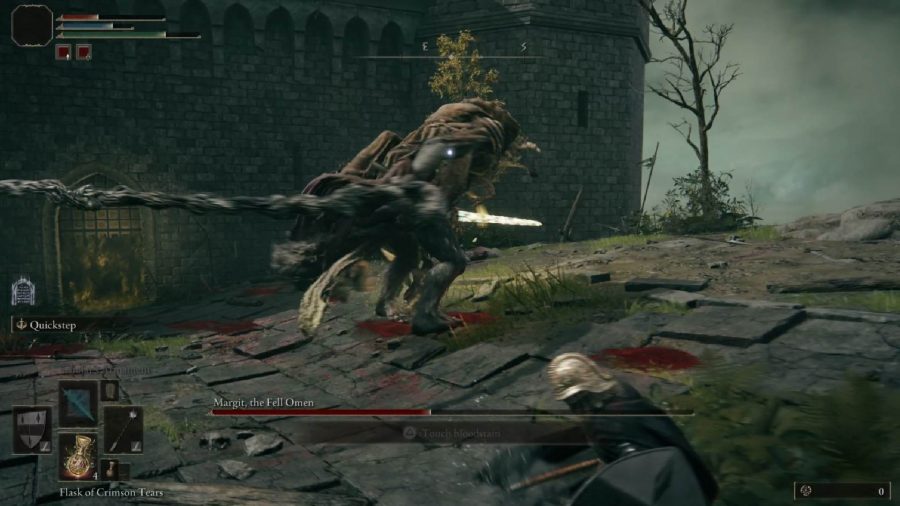 However, he is likely to follow this attack up with a four-hit spinning attack. This is another difficult to dodge attack. You are susceptible to taking a hit here.

If you are able to get far enough away from him, then dodge backwards for each attack. However, if you are quite close, you want to dodge away for the first two spins, and then dodge into Margit and get around his left side to dodge the second two.

This attack is one of the hardest in the fight to dodge and even upon beating Margit, we still didn’t feel like we had fully learned it. If you do end up triggering it, try your best to roll consistently out of the way or into Margit. However, what you should really do is pray for a bit of luck and hopefully not see this attack at all. You can also try blocking this attack, but to block all four hits it requires a full stamina bar. 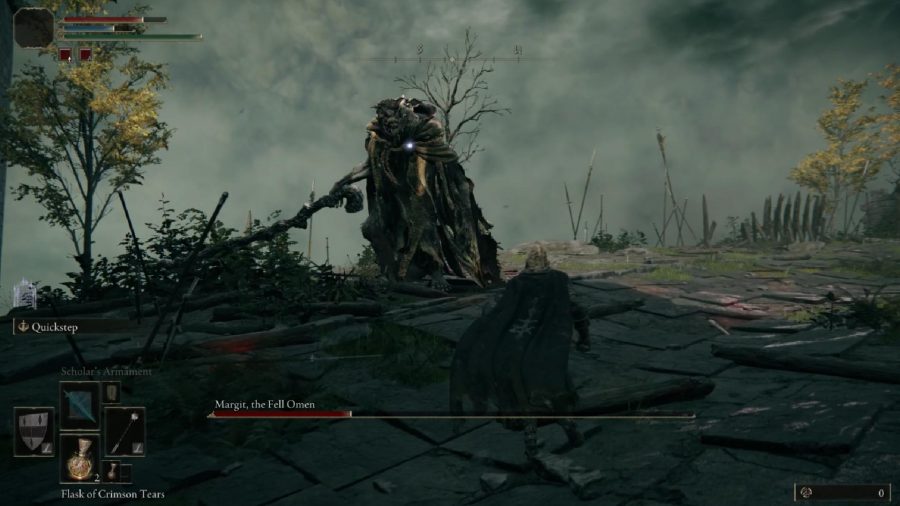 The big increase in difficulty here comes from the fact that his regular combos can now chain into a hammer slam, hammer spin, four-hit combo, magic arrows, and more. This gives Margit the “relentless” impression mentioned earlier.

It can be very hard to find a spot to heal and take a break, but the main point you need to keep in mind for this phase of the fight is to not get hit. If you don’t get hit, you don’t need to worry about healing.

For this reason, when you get a moment and Margit is walking around at a distance, you will want to call in a Spirit to distract him. Personally, we found the Lone Wolf spirits to be great, as the three wolves can keep Margit occupied and stunned.

And there you have it. Margit, the Fell Omen should be dead. Hopefully these tips have helped you to defeat Margit, the Fell Omen in Elden Ring. He is an exceptionally tough challenge for new players, so don’t be too put off if it takes you a while to learn his attacks. For more boss guides as you head into Stormveil Castle, check out our Elden Ring walkthrough, which is filled with additional help.