Essentially the closest thing Destiny 2 has to a mage class, the Warlock is possibly the most versatile of the three classes in the game – something our Destiny 2 Warlock build guide will now perfectly demonstrate. Ostensibly the more cerebral of the bunch, the Warlock can still bring the noise and is able to dish out massive damage while speccing for strong defence and utility.

With hundreds of possible combinations and some of the coolest abilities in the game, it can be tough to even figure out what works best for you. While The Witch Queen expansion and Void 3.0 have introduced a lot of positive changes for the Warlock, the other subclasses can still hold their own in a ruck.

In this Destiny 2 Warlock build guide, we’ll give you a handful of options to start with for PvP and PvE activities. While we’ll be dealing with some endgame mods and items, we’ll try to avoid any super-rare drops.

For the best Destiny 2 Warlock build for PvE in Season of the Risen, look no further than this Chaos Engine Void build.

The true beauty of this build is the Devour effect. The Feed the Void Aspect will grant Devour for every enemy defeated with a Void ability, and since you’ll be slinging grenades left and right, you’ll rarely lose the buff. Echo of Persistence might even be overkill, as this increases the intrinsic effect. You might get by just as well slotting Echo of Exchange instead. 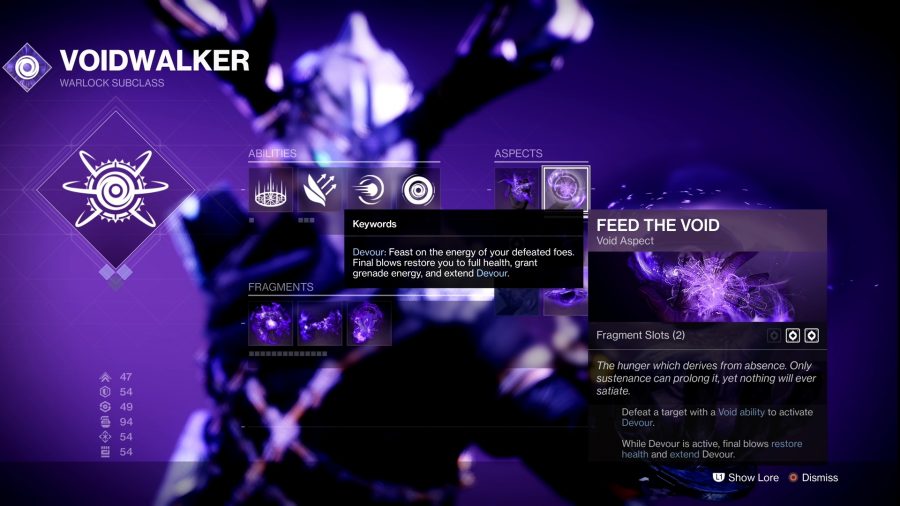 If you choose to run Charged with Light (which is usually more consistently rewarding than Warmind Cells), consider sticking Gnawing Hunger in your secondary weapon slot as the Void damage from this assault rifle will help generate elemental wells. If it’s Masterworked, even better, as you’ll get Orbs of Power for your trouble. Gnawing Hunger commonly rolls with Demolitionist, which boosts your grenade recharge rate. Finally, choose Vortex grenade to maximise the effects of Echo of Remnants.

Contraverse Hold or Nezerac’s Sin are the Exotics of choice, as both boost Void abilities, but if you have neither consider the standard fall-backs such as Ophidian Aspect or Verity’s Brow.

Arguably the best Destiny 2 Warlock build for PvP activities in Season of the Risen is this Rain of Fire Solar build.

There are so many awesome choices for an offensive Warlock in PvP, but this build focuses on dishing out burns, increased Super regen, and buffing your team without resorting to Well of Radiance. The Fated for the Flame perk adds a seeker effect to your Daybreak projectiles, and kills increase the duration. Not only that, but in a pinch the Phoenix Dive will heal you and refund some Super energy.

Slotting the Radiant Light perk to your helmet will bestow Charged with Light upon nearby squadmates, giving everyone a boost. Chuck High-Energy Fire or Firepower into one of your free slots and you’ll improve your own effectiveness at the same time. Harmonic Siphon (also a helmet mod) is useful if you’re running weapons like Sunshot or Ticcu’s Divination. 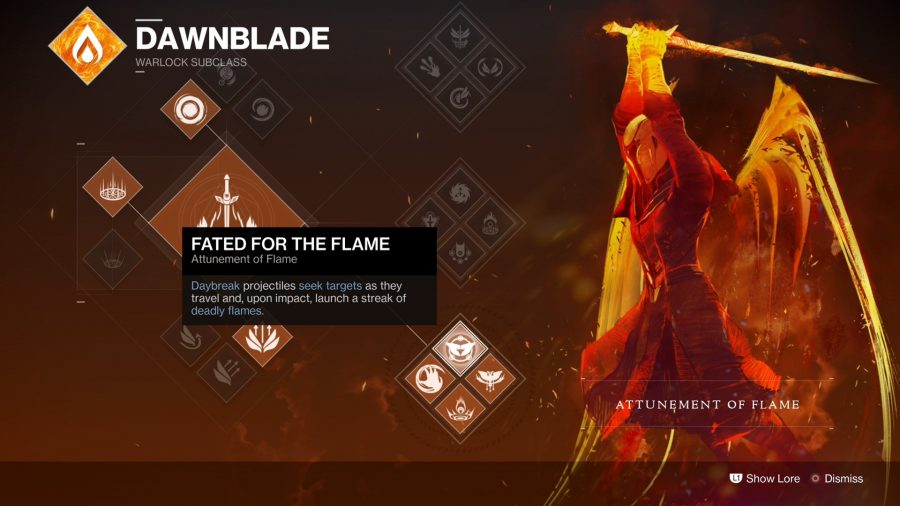 Exotics are less important for this build than most. Sunbracers are a great pick, as is Starfire Protocol if you run Fusion grenades instead of Solar, as the Exotic perk grants a second Fusion grenade. Ophidian Aspect and Verity’s Brow are great Exotics for PvP though, so feel free to mix it up.

Destiny 2 Warlock build for all activities

We reckon that as an all-rounder, the best Destiny 2 Warlock build you could use in Season of the Risen is this Arc Party Arc build.

This is a build that will not only devastate crowds of ads in PvE, but throw up a few surprises for opposing Guardians in PvP, too. It focuses on keeping your Rift up as often and for as long as possible, while causing liberal damage with grenades and always having a buddy or two by your side.

The two essential elements are your Arc Soul (from bottom-tree Stormcaller), and the time-slip caused by chaining kills with No Time to Explain. The Stag or Lunafaction Boots will help power your Rift, increasing its effectiveness or longevity. High Recovery will boost the recharge rate, so spec into that with a back-up of Discipline if possible to boost your ‘nades.

We’d go with Arcbolt Grenade for the chain damage, but Storm Grenade would also work thanks to its sustained area of effect. The Rising Storm powered melee attack boosts all your regen rates, too. As for mods, you can’t really go wrong with either Hands-on or Ashes to Assets, while Bolstering Detonation (Arms), Absolution or Distribution (Legs) and Outreach (Bond) will help keep those resources flowing.

In PvP, your Arc Soul can be a menace to any unsuspecting Guardian, but combine it with the Time Portal and Rewind Again’s ammo economy in PvE and you have your own little squad to mow through crowds of adds in seconds. You’ll have Ability energy for days and very little will get close enough to trouble you.

Well, we hope this guide has given you some ideas. Remember, these are just a few examples of the kind of devastating endgame Warlock builds you can create without the need for particularly rare gear. There are countless alternatives to consider, but ultimately you’re always going to benefit from committing to a singular playstyle that you feel comfortable with.

If you’re also dabbling with Titan and Hunter classes in Season of the Risen, check out our best Destiny 2 Titan build and best Destiny 2 Hunter build guides for some more suggestions.