After almost five years and 16 seasons of updates, expansions, and tweaks, Destiny 2 has a vast and varied spread of weapons. Multiple archetypes, dozens of Legendary or Exotic guns, and tons of randomised perks make for one of the most diverse and exciting arsenals in any online shooter. But which are the best Destiny 2 PvP weapons right now in Season 16?

A skilled player can make any weapon combination viable, while those who simply want to have fun can do so with whatever feels comfortable. But who comes to the Crucible, Gambit, or Trials of Osiris to have fun? Not you. No, you come to bask in the warm glow of a fallen enemy’s Ghost as it cleans up after the beating you just dolled out.

If you want to be certain you’re bringing the meanest guns to the gunfight, our guide to the best Destiny 2 PvP weapons has got you covered.

Some of the best Destiny 2 PvP weapons to use in Season of the Risen include Eyasluna, The Chaperone, Le Monarque, and many more. While there are dozens of viable weapons to take into competitive PvP modes, we’ve highlighted the best options from each weapon archetype in this list.

Note that we’ve excluded Power weapons like swords or rocket launchers as these are often dependant on you securing heavy ammo. It’s the Energy and Kinetic slots where you’ll want to pay the closest attention. 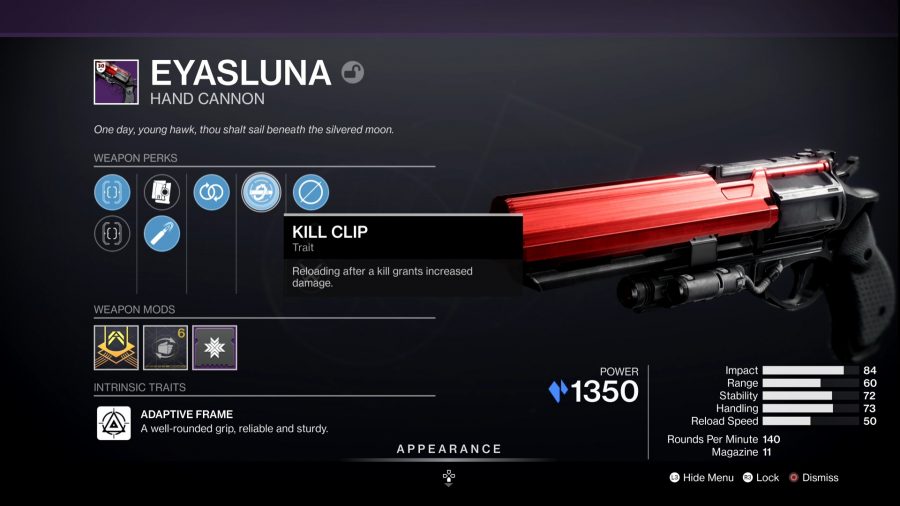 Hand Cannons are still very much the meta in Destiny 2 PvP. They’re versatile, powerful, and there’s a ton of Legendary options to free up your Exotic slot. While Fatebringer and Ace of Spades remain popular, Eyasluna clinches the top spot. It hits hard with 140 RPM, and when equipped with the Truesight HCS optic, the aim assistance is incredibly helpful. Roll this with Rangefinder and Moving Target and watch the bodies drop. 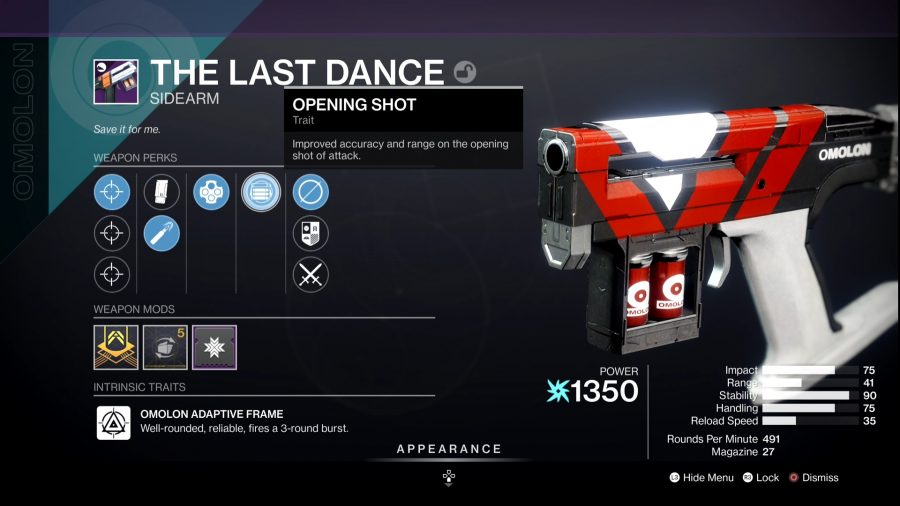 Sidearms aren’t often an obvious choice for PvP, but they can be deadly. In terms of raw damage and range, the clear leader is Halo-inspired Forerunner. Unfortunately, though, it takes up an Exotic slot and uses Energy ammo. The best alternative is The Last Dance, a powerful Sidearm that can roll with awesome perks like Moving Target and Kill Clip, which reward fast-paced, aggressive play. 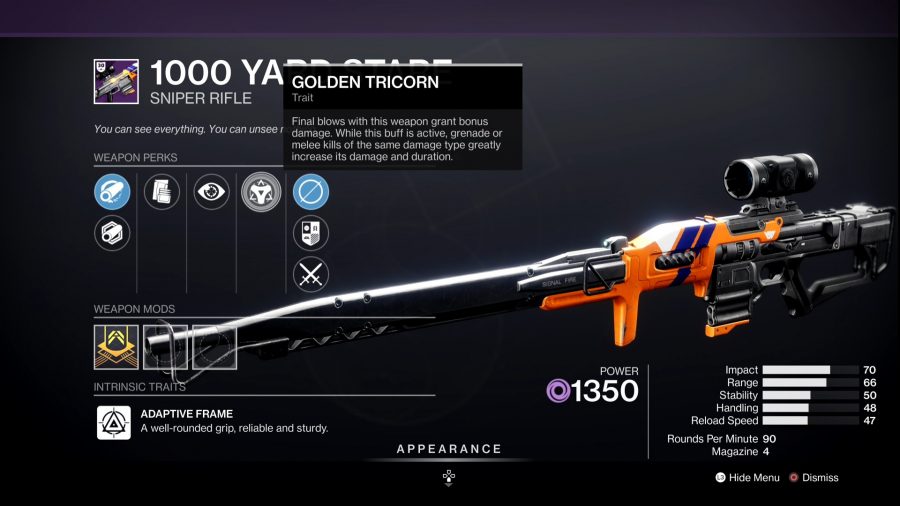 Sniping in Destiny 2 PvP is one of the last true specialisations, and as such, everyone has their preferences. While Adored and Thoughtless remain firm favourites, 1000 Yard Stare has some great base stats. As for perks, this comes down to play style but Firmly Planted and Snapshot Sights work great together. Golden Tricorn, though, is superb for the Guardian who snipes on the move and then gets stuck in. 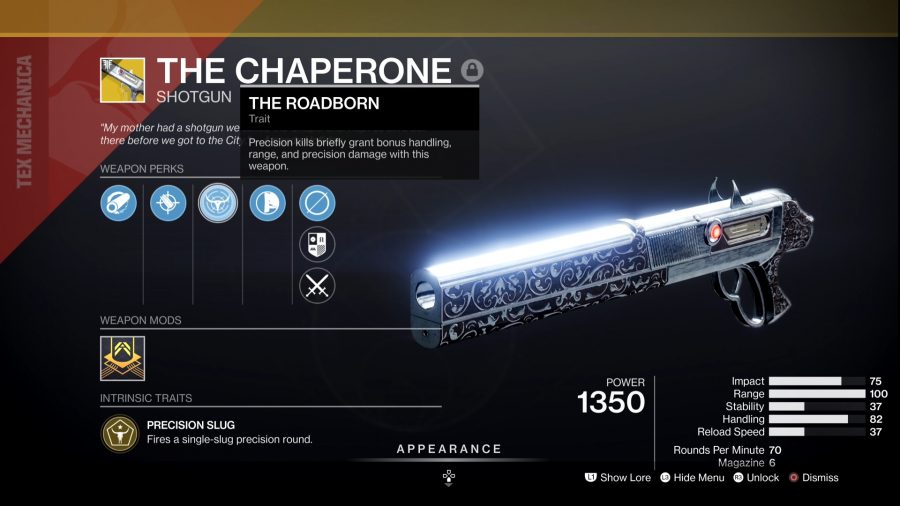 Shotgun Bros dominate the Crucible in Destiny 2 for a reason. In the right hands (read: most aggressive), The Chaperone is nigh unstoppable. The Precision Slug allows for devastating headshots up close, which in turn proc The Roadborn, an intrinsic perk that makes this beauty even more dangerous. It’s also a fine-looking weapon, if that’s your bag. 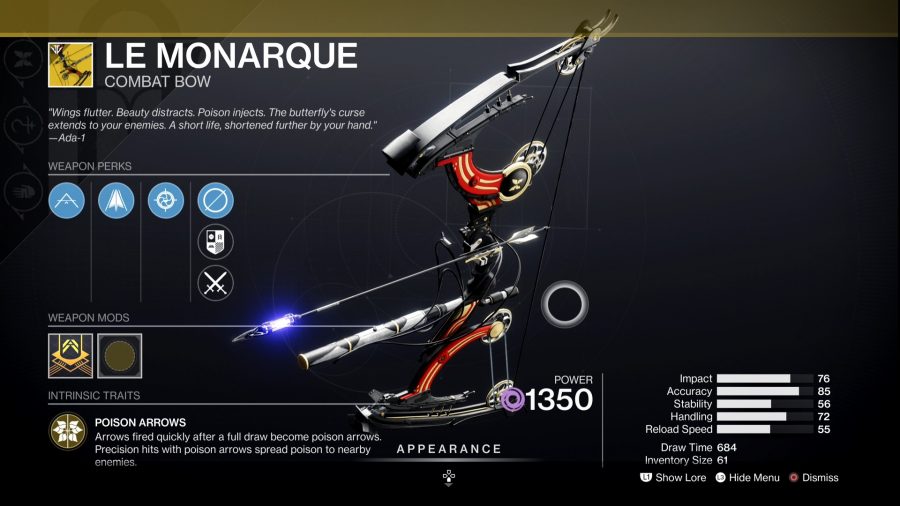 We wouldn’t want to condone any underhandedness in the Crucible, but frankly Le Monarque’s poison tick is too good to pass up. While the Snapshot Sights perk is great for fast players, the beauty of this bow is that damage-over-time effect. It might be nasty, but it’s fun. This weapon will cost you though, as it’s now only available via the Monument to Lost Lights in the Tower. 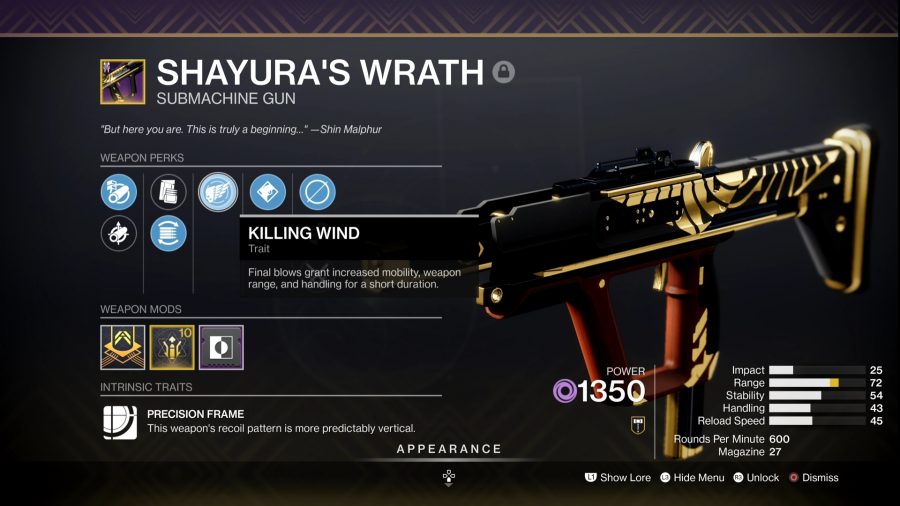 If you’ve ever been mowed down in seconds and left wondering if you were killed by a Guardian or a bolt of lightning, chances are you came up against an SMG with the right perks. There are plenty of great options for this weapon, but the best is Shayura’s Wrath. The 600 RPM grants it an incredible TTK (time to kill), and the aim assist is more than decent. Killing Wind and Kill Clip combine to make it truly terrifying. If you’re up to the task of earning the Adept version, even better. 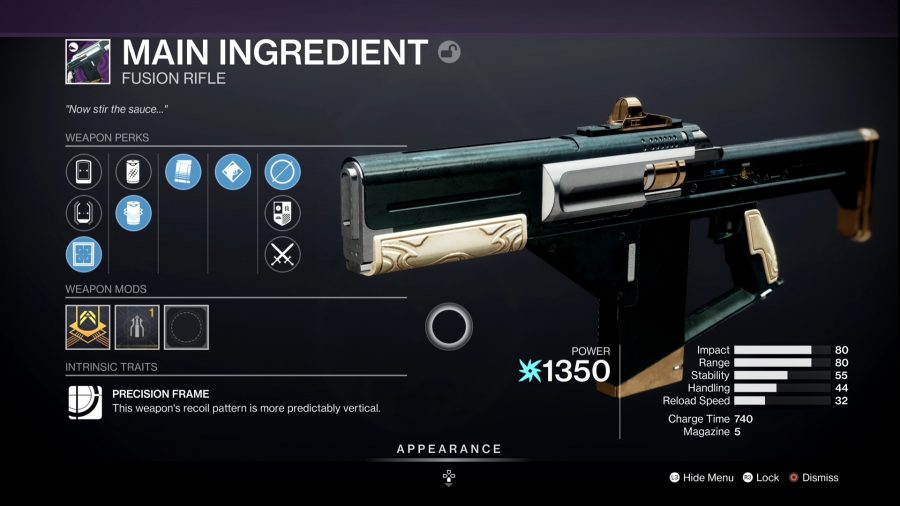 You can only get this beauty from Xur nowadays, but it’s worth it. The time-to-kill is brutal and can often one-shot opponents, but as with all Fusion Rifles there’s a skill cap requirement. Timing is essential, as the split second it takes to charge the shot is all an opponent needs. Under Pressure and High-Impact Reserves are great perks in PvP, as you start every round with a low mag anyway. 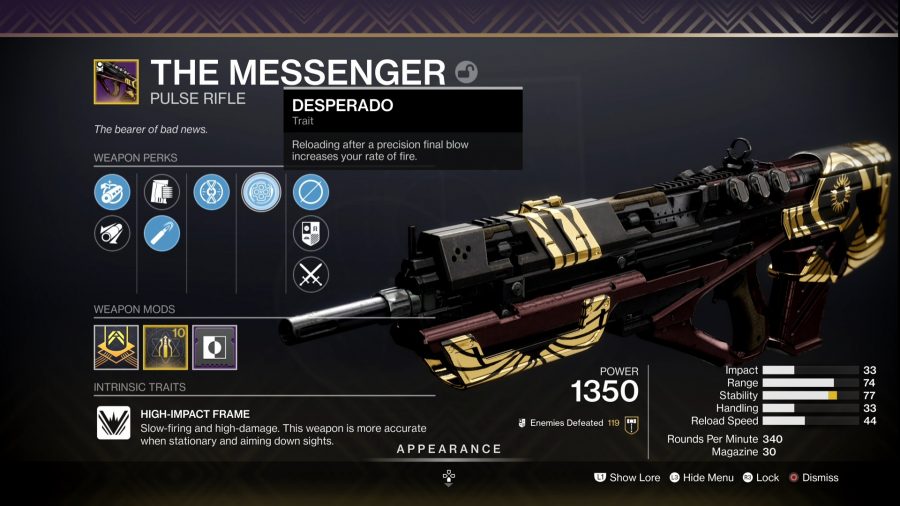 Another Trials of Osiris weapon, The Messenger outperforms most other Pulse Rifles thanks to the accuracy and control afforded by the High-Impact Frame. There are several sought-after perks, but Outlaw and Desperado combine to create a satisfying loop when the kills are piling up. Rapid Hit and Kill Clip are great alternatives. 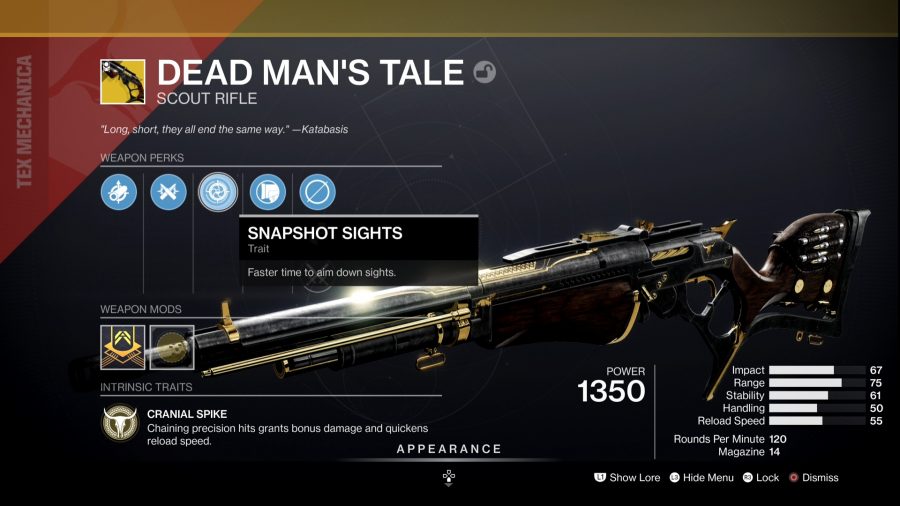 One of the best guns in Destiny 2 for any activity, Dead Man’s Tale is a fantastic hip-fire Scout Rifle. Since The Witch Queen release, it can roll with randomised perks in Xur’s inventory. Killing Wind, Vorpal Weapon, or Snapshot Sights combine with the Cranial Spike intrinsic trait to devastating effect. Slow, steady, accurate, and powerful. 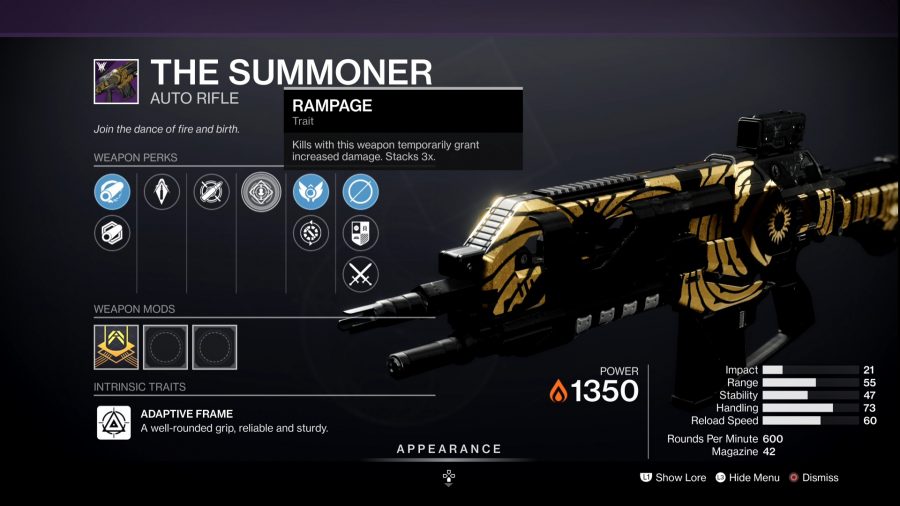 If you’re after an Exotic Auto Rifle, the Suros Regime is still probably the best choice. But for Legendary rolls, it’s hard to beat The Summoner. It’s a satisfying gun to wield, with a strong TTK and a big mag. Moving Target and Rampage turn it into a real beast in PvP activities. 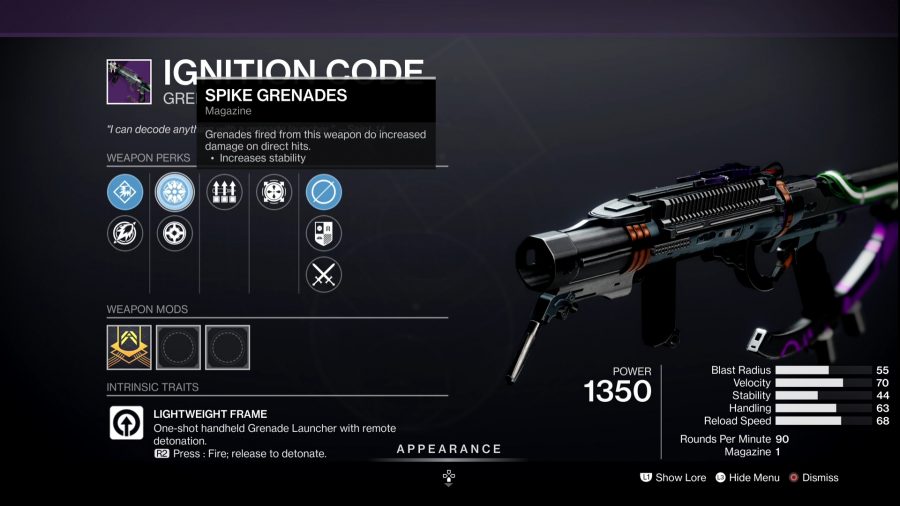 Usually we’d advise Salvager’s Salvo here, and if you have it the Chain Reaction perk still makes it one of the best. Unfortunately, it’s not as easy to come by in Season 16 and so Ignition Code stands out on perks alone. Ambitious Assassin is a great one to slot as reloading after a kill will chamber a second ‘nade. Frenzy and Vorpal Weapon are then great secondary perks in the Crucible.

So there you have it. The best Destiny 2 PvP weapons across each Kinetic and Energy archetype. Experiment with what’s out there and find a loadout that works for you. For PvE activities like strikes, raids, or Witch Queen missions, check out our best Destiny 2 weapons list for more helpful advice.