With the launch of Destiny 2: The Witch Queen and the introduction of Void 3.0, subclass builds are now more relevant and, crucially, more flexible than ever – hence our Destiny 2 Hunter build guide. But in a constantly-evolving universe like Destiny 2’s, chasing the ever-changing “meta” can feel like chasing wild geese. In the dark. On ice.

That said, while the meta is meta for a reason, it’s not the only way to play, and nor is it often the most fun. Destiny 2 has a huge array of weapons, armour, skills, subclasses, and mods to play around with. While it would take countless hours to assemble all the possible combinations, we’ll give you a few good jumping-off points to make the best use of everyone’s favourite stabby space ninjas.

Be aware that this Destiny 2 Hunter build guide will deal with endgame gear, mods and skills, though we’ll try to exclude gear that is hard to obtain like Raid-only Exotics.

Arguably the best Destiny 2 Hunter build for PvE in Season of the Risen is this Frozen Harvest Stasis build.

The purpose of this build is to always have your grenade up. Grim Harvest causes frozen or slowed enemies to leave behind Stasis crystals on death, and a Duskfield Grenade will impart that status on any enemy inside its dome. The really cool part is what the Fragments do. Whisper of Rime will grant a portion of Overshield for every crystal you collect; Whisper of Shards boosts your grenade recharge rate for each one; and Whisper of Chains reduces damage taken when you’re in the vicinity of Stasis crystals.

The reason we advise Touch of Winter over the excellent Shatterdive in PvE is that, in addition to the enhanced grenade effects, the extra Fragment slot means you can slot both Whisper of Torment (recharges grenade as you take damage) and either Whisper of Conduction (draws crystals to you) or Whisper of Fissures (increases the damage and blast radius of shattered crystals). 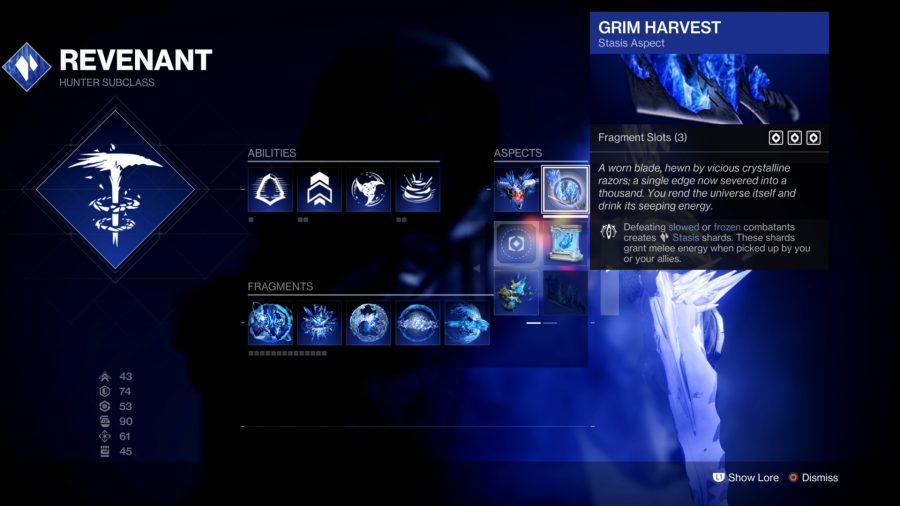 When paired with the Charged with Light mods detailed above, which increase damage, Super recharge rate, and grenade energy recharge rate, this build becomes one of the most devastating endgame Hunter builds for solo, group, or even PvP activities. Though in PvP, you may want to ditch some of the Charged with Light mods for defence and switch-out Touch of Winter for Shatterdive. The weapon you choose is immaterial – just pick something you feel comfortable with. Stomp-EE5 make a great Exotic, as they have intrinsic high Mobility without sacrificing Discipline.

For us, the best Destiny 2 Hunter build for PvP in Season of the Risen is this Phantom Menace Void build.

In stark contrast to the PvE build, this set-up is all about using the Hunter’s enhanced mobility, penchant for invisibility, and gift for suppression and confusion to get the upper hand. A skilled Nightstalker is an absolute menace in game modes like Control and even Trials of Osiris. Suppression Grenades are great for messing with other Guardians, and Echo of Domineering maximises their effectiveness by boosting Mobility and reloading your current weapon after suppressing a target. Echo of Leeching triggers health regen after a melee kill, which is great if you find yourself in a close quarters encounter. Echo of Expulsion adds an explosive effect to your Void final blows, while Echo of Exchange refills grenade energy with melee kills.

As for the Aspects, Vanishing Step grants invisibility on Dodge, and Stylish Executioner grants invisibility and Truesight after killing a weakened, suppressed, or volatile target. Frankly, this build is lethal when paired with certain Exotics. Gwisin Vest, for example, causes you to vanish after each Spectral Blade kill; Graviton Forfeit improves invisibility, and Gemini Jester messes with the enemy’s radar. On the whole, this build is just great fun in the Crucible. It doesn’t even matter which weapon you choose, although Exotics like Osteo Striga, Thorn, and Le Monarque add an extra level of cruelty if you’re so inclined. 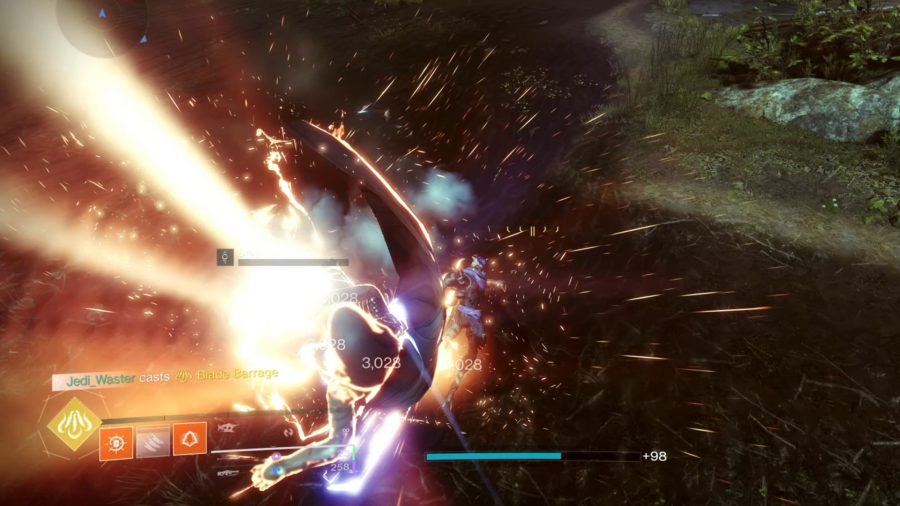 Destiny 2 Hunter build for all activities

One of the best Destiny 2 Hunter builds for any activity in Season of the Risen is this Fireblade Solar Hunter build.

This build focuses on keeping your enemies aflame. The Burning Edge perk in mid-tree Gunslinger recharges your Dodge as enemies burn, while Playing with Fire recharges your Knife Trick powered melee when you kill engulfed enemies. Finally, using either Ophidia Spathe for an extra Dodge or Shards of Galanor to recharge your Super on cast are faultless choices for Exotic armour. The Warmind mods when combined with Sunshot or an IKELOS weapon add extra burning damage in PvE activities.

Well, we hope this guide has given you some ideas. Remember, these are just a few examples of the kind of devastating endgame Hunter builds you can create without the need for particularly rare gear. There are countless alternatives to consider, but ultimately you’re always going to benefit from committing to a singular playstyle that you feel comfortable with.