Destiny 2’s Titans are often portrayed as big punchy bullies, who would rather headbutt their way through a problem than give it a moment’s thought. Which isn’t necessarily a bad thing. But in our Destiny 2 Titan Build guide, we’ll show you that, just like the Hunters and Warlocks, there’s more to Titans than just hulking out. Not a lot more, we hasten to add – you’ll still get to wreck stuff like a toddler in a mech suit.

As Destiny 2 has evolved from launch through to The Witch Queen, so too has the humble Titan. There are now more ways to build an offensive tank or defensive bulwark than ever before.

In this Destiny 2 Titan build guide, we’ll give you a handful of options to start with in both PvE and PvP. We’ll be dealing with some endgame mods and items, but we’ll try to avoid any super-rare drops.

For the best Destiny 2 Titan build for PvE activities in Season of the Risen, try this Warrior of the Sun Solar build.

Few arguments for Titan superiority are stronger than a well-equipped Sunbreaker. Calling on fire and rage to reduce their enemies to smouldering ashes, they’re a menace in both PvP and PvE. Combining their intrinsic pyromancy with a Warmind build and a weapon like Sunshot or Ticuu’s Divination make them utterly domineering on the PvE battlefield.

This particular build focuses on the bottom-tree’s Sunspots, which create pools of fire in which your abilities and health will regenerate much faster thanks to the Sun Warrior perk. Hallowfire Heart is the go-to Exotic for Solar Titans, but if you can get your hands on the Phoenix Cradle legs, they’re a better fit for this build. Their intrinsic perk increases the potency of the Sun Warrior buff.

As for mods, Hands-on and Ashes to Assets are staples, while Impact Induction and Explosive Wellmaker ensure that your grenades are regular and devastating. Solar leg armour can also be slotted with Recuperation or Innervation, which recharge health or grenade energy when you pick up an Orb of Power. If you pair Towering Barricade with Perpetuation, you’ll earn Class Ability energy back while you’re in cover.

The best Destiny 2 Titan build for PvP during Season of the Risen is this Shield Wall Void build.

Staying alive and keeping your team on their feet need not be mutually exclusive. With a build focused around Overshield, Ward of Dawn, and popping your Rally Barricade in a pinch, this set-up is ideal for bunkering down in Control, Trials of Osiris, or Gambit.

The Bastion Aspect gives an enhanced Overshield to any nearby allies when you use your Super or Barricade. Meanwhile, Offensive Bulwark grants an Overshield when you’re inside your Ward of Dawn, speeds up grenade recharge, and boosts your melee capabilities. While it can be fun to charge around the battlefield using Shield Bash, we’d recommend Shield Throw for your powered melee. It gives you an extra ranged attack for when you’re hunkered behind cover. 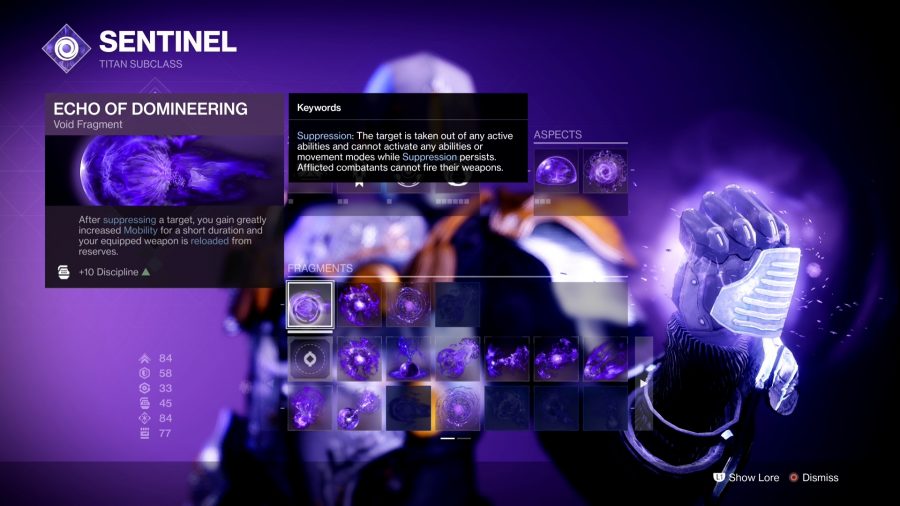 Void 3.0’s Fragments are super useful for this build. Echo of Dilation is a handy Fragment to equip, as it increases Mobility and Intellect, and enhances your radar while crouching. Echo of Expulsion causes enemies to explode if you nail them with Void damage, and Echo of Domineering grants a boon for any enemy you hit with your Suppressor grenade.

You can use whichever weapons you’re comfortable with, though keep a shotgun handy for close encounters as enemies will push your position out of spite. The Helm of Saint-14 will improve your Ward of Dawn, while the One-Eyed Mask, Dunemarchers or Mask of the Quiet One are decent generic pieces. Heart of Inmost Light, though, will improve your overall efficiency.

Arguably the best Destiny 2 Titan build for all activities in Season of the Risen is this Lord of Thunder Arc build.

Sometimes you just want to break things, and this build is perfect for that. It’s built around powering your melee, charging your enemies, and bringing the thunder when it’s time. The Cuirass of the Falling Star is an incredible Exotic to pair with the Thundercrash Super ability, and will absolutely devastate anything you catch in its radius. If you don’t have it, An Insurmountable Skullfort is great for melee-focused Strikers as it will grant health and melee energy on kills. Strap on the Monte Carlo auto-rifle and gain melee energy for every weapon kill at the same time.

The intrinsic perks of Code of the Missile also work with the bull-in-a-teashop approach, as each is geared to reward reckless charges. Inertia Override increases weapon damage and reloads your equipped weapon after a slide. Impact Conversion grants Super Energy and even procs Inertia Override when you use the devastating Ballistic Slam. Finally, equip the Flashbang grenade to disorient enemy groups before you roll through them like a lightning-infused bowling ball. 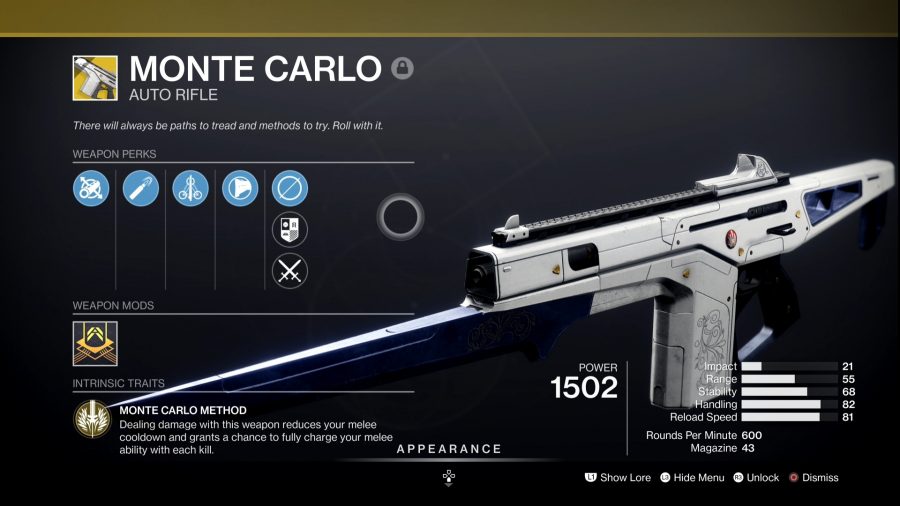 On top of this, there are some great Arc mods if you go for a full Arc build. Hands-on and Momentum Transfer will keep your resources flowing, while Invigoration, Outreach and Distribution will create a comfortable loop of recharging energy. Stay on the offensive, and you’ll smash through most activities with this build like a bolt from the blue.

Hopefully this guide has given you some ideas for the next time you jump into Destiny 2. Remember, these are just a few examples of the kind of devastating endgame Titan builds you can create without the need for particularly rare gear. There are countless alternatives to consider, but ultimately you’re always going to benefit from committing to a singular playstyle that you feel comfortable with.

If you’re also grinding on a Hunter or Warlock account, check out our Destiny 2 Hunter build and Destiny 2 Warlock build guides.