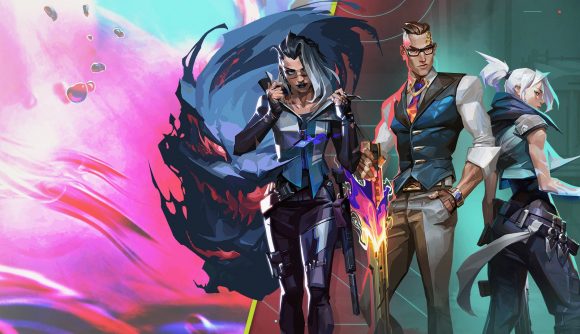 Valorant Episode 4, Act 3 has just been announced by developer Riot Games, officially unveiling the Fade release date, as well as detailing the next set of battle pass rewards. Eager fans won’t have long to wait to get their hands on the new goodies, as the next act is set to release in just a few days’ time, on April 27.

Highlights of the upcoming battle pass for free players include the UltraBright Torch and Ragna-Rock Out buddies, which take the form of a flashlight and a drum kit respectively; plus, a Coalition: Cobra-themed skin set for the Frenzy. Paying battle pass players can look forward to new .SYS skins for the Vandal and Axe, a Hue Shift Phantom, and the Deep Divisions buddy, allowing you to take a miniature Fracture map everywhere you go.

Alongside the new agent and battle pass, the gaming hardware-inspired RGX 11z Pro skin line was unveiled, bolstering out the long list of Valorant skins available. The bundle features slick glowing LEDs for weapons like Phantom, Operation and Spectre, and levelling up the new skin line will grant you custom, color-changing effects and rotating mechanisms within your weapon of choice.

Confirming the abilities leak from last month, the official description of Fade’s move set includes Haunt, which allows you to equip a nightmarish entity, Seize, Prowler, and Nightfall.

In a Q&A with Riot Games designer Nicholas Smith, it was confirmed that Fade was designed to be a “competitor to Sova,” who has gone virtually uncontested at the top of our Valorant agent tier list since the game launched. To challenge Sova’s abilities is no small feat, but Smith suggests the solution was to bring recon closer to the action, rather than further away: “Fade brings recon to a personal level, more potent in a localized area. … Also wanted to have a recon character that was less reliant on line-ups.”

After Riot announced there would be no new agent for Episode 4, Act 2 in lieu of a Yoru rework and a swathe of balance patches to ensure the long-term health of the game, fans will be relieved to see the company back on track with the release of Fade. Let’s just hope the new agent makes it at least a few more hours into ranked than Yoru did.