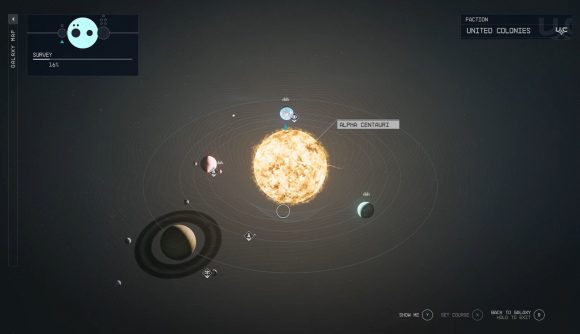 Starfield was always going to be big, but no one quite expected it to be “1,000 planets” big. During the Xbox and Bethesda Showcase, Bethesda’s Todd Howard revealed the sheer size of Starfield and the solar systems within its universe.

During the Starfield gameplay trailer, Howard walks us through an overworld view of one small system, showing how players can pick to land at any location on the surface of any planet, a bit like how you can fly down to any point on a planet in No Man’s Sky. This would be fairly impressive in itself – this first system had a total of 12 planets and moons, from what we could make out. However, it turns out Starfield will have “over 100 systems”, meaning that in total there are “over 1,000 planets, all open for you to explore”.

It wasn’t stated whether some of these are procedurally generated or all hand-crafted open-world spaces, and of course these will not be full-size mega planets like we see in No Man’s Sky. But to have 1,000 separate areas, no matter how large they may be, is pretty astounding.

These Starfield planets will include “baron but resource-heavy ice balls” to “Goldilocks planets” that support life.

As well as learning about the true scale of Starfield, we also got a look at gunplay, another look at some of the game’s characters and factions, and an impressive-looking Starfield character creator. You can even build your own ship for space dogfights.

Bethesda appears to have pulled in all the best bits from fan-favourite space games and dropped it into their open world RPG formula.

For more info on when you can play it, check out our Starfield release date guide.