Saints Row burst onto the scene all the way back in 2006. The game was well-received, but garnered a lot of comparison to the GTA franchise, with them both having similar themes and worlds. However, Saints Row was successful enough that it generated three whole sequels, those being Saints Row 2, Saints Row: The Third, and Saints Row IV. The series has evolved and grown with every new release into the series, and that doesn’t seem to be any different with the newest iteration of the game. 2022’s Saints Row features an incredibly broad amount of customisation, weapons, and vehicles. So today, let us talk about the latter with this Saints Row vehicle list.

Saints Row features over 80 vehicles to unlock throughout its massive and extensive game world. All vehicles can be customised however you like, with tools that let you change the paint, alloys, rooftops, bumpers, wheels, the sound of your exhaust, and so much more. They really want you to make the game – and your wheels – your own.

The vehicles also have special abilities that give you an edge when traversing the world, especially if you are trying to make a quick getaway from any pursuers. If you want to know more about these cool and slick abilities, check out our article that goes into more details about the Saints Row vehicle abilities. Now let us get on with this Saints Row vehicle list.

Here is a Saints Row vehicle list of every car that’s been revealed or spotted so far. Saints Row will have over 80 cars when it releases, so expect this list to grow.

Here are all the currently known Saints Row vehicles: 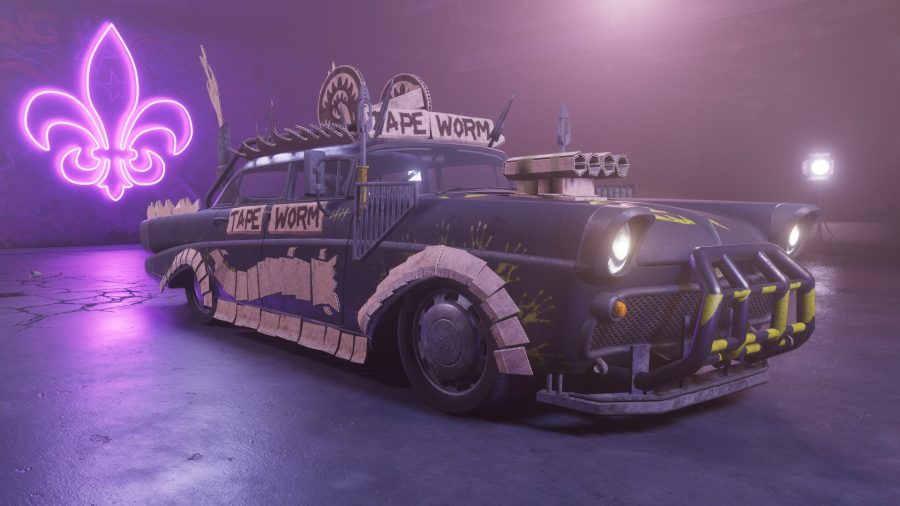 That’s the list we have for the moment, however, whenever an update comes out expanding on the vehicles in Saints Row, we will update this vehicle list with any new additions.

Some interesting vehicles to keep an eye on will definitely be the Bowelrod, this is the only vehicle on the list so far that was shown with a golden tag next to its name, which could indicate a rare vehicle or maybe something to do with the story of Saints Row.

Other stand outs are certainly Emu, which is a mini shark car that screamed personality; Frying Dutchman, a giant pirate boat on wheels; MDI- 344T, a massive tank that players could wreak havoc with; and I Dream Of Weenie, because who doesn’t want to ride around in a van with a giant hotdog on the roof?

Want to check out the Saints Row customisation showcase for yourself? Here is the video.

That’s it for this Saints Row vehicle list. If you are craving some more Saints Row goodness, why not check out this article where we go in depth with the new Saints Row character creator, that is even bigger and weirder than before. Let’s go raise some havoc in Santo Ileso.