Sandbox survival game Rust has enjoyed an explosive surge in popularity – especially on Twitch – in recent months. Originally released into Early Access in 2013, with its full iteration launching in 2018, Rust sees players dropped into a procedurally generated map with naught but a big rock and a torch to their name. From there, they must forage, hunt, and craft to survive the unforgiving environment, while oftentimes swatting away attacks from other, hostile inhabitants.

Developer Facepunch, led by Garry’s Mod creator Garry Newman, has continually updated the game, adding a slew of new content over the past couple of years to keep the experience fresh. Many of these more recent features have been picked up and pushed to their limits by the game’s incredibly creative community. And, at the end of last year, a private roleplaying server started by stream team OfflineTV – which contains some of the biggest streamers out there – showcased Rust’s potential to its massive audience.

Having peaked at well over a million viewers at the beginning of January, Rust continues to push boundaries online, sitting as one of Twitch’s most-watched games alongside the likes of Counter-Strike: Global Offensive and fellow sandbox game Minecraft. The game’s growth has also benefited from Twitch’s drop system, with Facepunch developing streamer-related cosmetics which players can get their hands on simply by watching live streams on the platform.

We wanted to find out how the minds behind Rust felt about the game’s meteoric rise, how the existing Rust community has responded to this wave of popularity, and how that Pokimane garage door cosmetic came about. You can find Rust’s game lead Maurino ‘Helk’ Berry’s answers to these things and more below in his Q&A with The Loadout.

The Loadout: When you first saw Rust’s popularity begin to climb on Twitch with the OfflineTV server, did you ever anticipate that you might have another Among Us on your hands?

Maurino ‘Helk’ Berry: Not at all! Rust had a successful 2020; we’d already seen new peaks for players and streaming, but we’d gone into Christmas thinking we’d have some time to plan and work on Rust for 2021. But after OfflineTV got involved and showcased Rust, then more streamers joined, our existing players got really involved, and at the same time as we had Steam sales ongoing. Things snowballed. Then on top of that, the Spanish language streamers started their ‘Egoland’ server and it blew up again.

We had no idea that Rust, just into its eighth year, would become one of the most streamed games of all time. 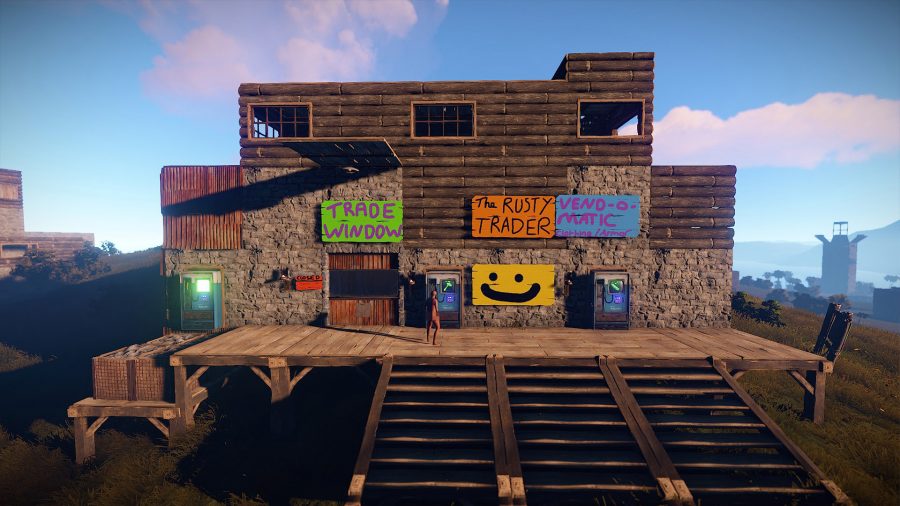 What was the team’s reaction to smashing past one million viewers across all of Twitch, a feat only a handful of games have achieved?

What is it about Rust that you feel has drawn bigger creators to it?

There are different ways to play Rust – there’s the core PvP for sure, but there’s also the roleplaying side – we’ve always had an active community. Plus Rust is pretty freeform – we set out to make a game with few restrictions and leave it mostly to the players.

We update the game monthly and there’s regular content updates, so in the last couple of years just as a few examples we’ve added things like electricity, musical instruments, a range of vehicles, CCTV and night vision, while also updating and rebalancing combat, farming, and crafting. We found that resonated with different streamers who’re interested in different things.

Games like Escape From Tarkov have shown the power of the Twitch drop. You guys acted very swiftly to create streamer-themed cosmetics for your own drops campaign. Why did you think it was important to do this, and will we be seeing more streamer-branded content in the future? If so, any hints on who might feature?

Twitch drops can be a win for everyone – players get something cool in return for watching good content, the streamers can reward their audiences for watching, and we get another way to show the game. We’ll definitely do more in the future.

Also, who thought of a Imane ‘Pokimane’ Anys garage door? I want to shake their hand…

For Pokimane’s garage door, it was a combination of existing work she’d done plus the efforts of two community artists called ‘sfonsper’ and ‘Mishka’. For the drops more generally – some of the best Rust community skin creators volunteered their help, we used key art where possible, and worked with the streamers. Together we came up with drops. 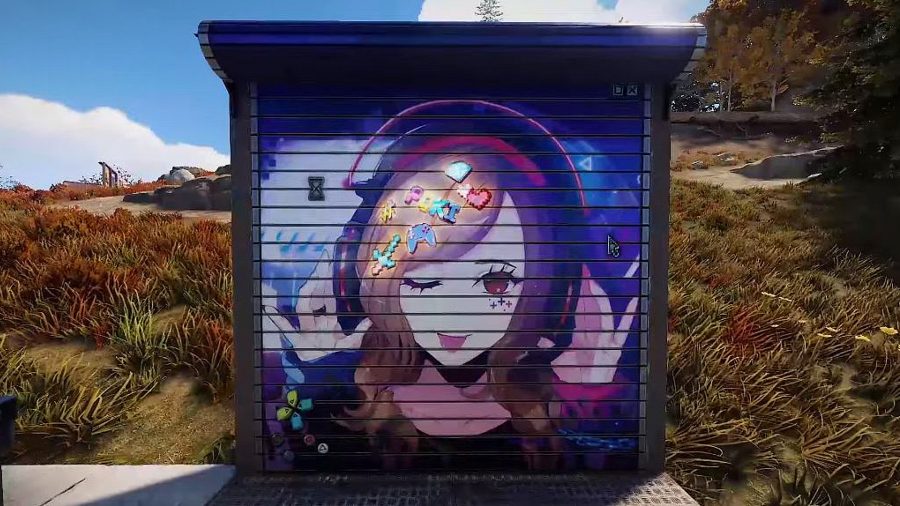 From your perspective, how has the existing Rust community reacted and responded to the influx of new players and the attention the likes of Felix ‘xQc’ Lengyel and Pokimane have drawn to their game?

We hope most people liked seeing Rust being played and watched by many more people than before, with a lot of cool content that maybe wouldn’t have happened otherwise, and saw this is good for everyone overall.

Twitch trends don’t last forever and the next big game to blow up could be just around the corner. How are you planning on keeping the big names interested in Rust for as long as possible?

Our focus is on Rust, where we can take it in 2021, and what we’ve learned from the last few weeks. We really appreciate both existing and new players and we hope they keep finding new things to like about Rust.
We’re looking at things like the early game experience, overhauling the tutorial, while continuing our regular content updates like we’ve always done.

What are some of your favourite community moments from recent memory?

There’s so many to pick from! It was amazing to watch in the early days the formation of Team Rocket, the Kittens and others, watching streamers both roleplaying as well as the core crafting/building/raiding. We really enjoyed the battles between xQc, Ali ‘Myth’ Kabbani, Michael ‘Shroud’ Grzesiek, the Kittens and others. There was this explosion of cool stuff. We loved the Blood Church and Police storylines, especially the prison debate between William ‘WillNeff’ Neff and ‘Spaceboy’ and the subsequent jailbreak. 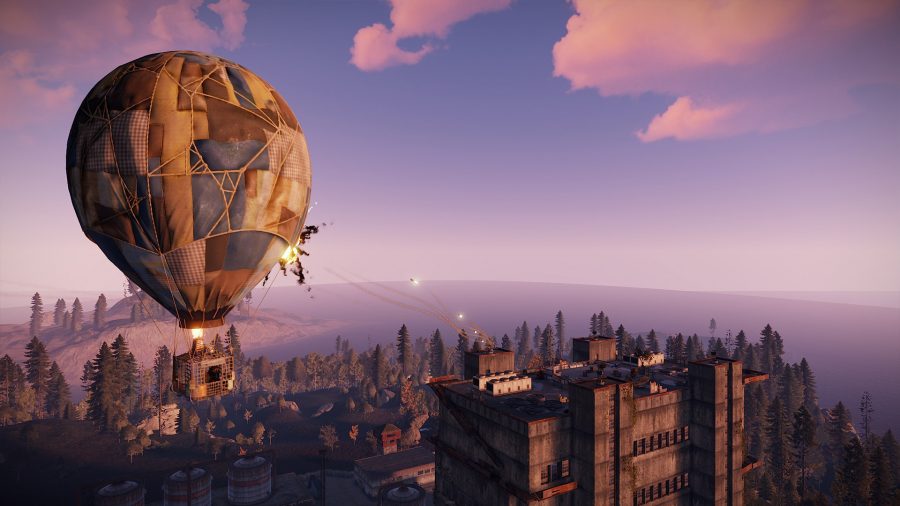 Then one night we checked the streams and saw streamers were putting each other on trial, like Lily ‘Lilypichu’ Ki vs the Kittens. Oh and then there’s the time Lilypichu and Seán ‘JackSepticEye’ McLoughlin got trapped by a serial killer in a haunted house.

The Rust coliseum also got great use: it was a combat arena of course, it saw dozens of gathered streamers strafed by the attack helicopter, and it hosted a four-way mayoral election.

More generally we loved seeing people pursuing their own things too, like Albert ‘BoxBox’ Zheng and speedruns. A lot of artwork got made. A bunch of people like ‘hJune’ and ‘Sykkuno’ practiced their minicopter skills, though we really laughed when we saw Vincent ‘Cyr’ Cyr and Spaceboy snipe Nathan ‘Blaustoise’ Blau out of the sky. We were also really pleased to see in the background people playing the musical instruments we introduced fairly recently.

Rust’s community was pretty busy in 2020 too. We had a big Charitable Rust community campaign – the Trust in Rust community – organised tournaments (we raised over $300,000 for charity across that and our Movember campaign), and a whole bunch of other cool content the community comes up with every month.

Aaron Down also contributed to this article.