In Pokémon Sword and Shield’s The Crown Tundra expansion pack, you’ll face off against many familiar legendary creatures. You’ll also come across plenty of regional variants, and some never before seen Pokémon. While having the Regi trio hidden in shrines is a bit of an old trick for the series, there are two new Regi Pokémon that are exclusive to this DLC.

Both Regieleki and Regidrago are brand new Crown Tundra Pokémon, joining Galarian Articuno, Galarian Zapdos, and Galarian Moltres as some of the most desirable Pokémon to catch. Regieleki is a zippy Electric-type with the highest base Speed stat in the entire game. Yes, it even outspeeds Deoxys’ Speed Forme.

Regidrago on the other hand might not have a record-breaking stat, but it has a Dragon-type version of Water Spout that can hit every enemy on the opposing end of the battlefield. If it’s at maximum health, it’ll likely make enemies pop. If you want to nab both new Regis, then you’ll have to trade with another player, as you’re limited to just one per game. Nevertheless, we have the locations of every single Regi in The Crown Tundra right here.

To find the Regirock, Regice, and Registeel, you’ll need to find and crack open three temples. Once inside, step on the dots and they will light up. Once all the dots are lit up, it will activate the statue at the back of the temple. Then, interact with the statue to start the battle. We’ve described all of their locations in the segments below, but we’ve also prepared a map with their locations highlighted. 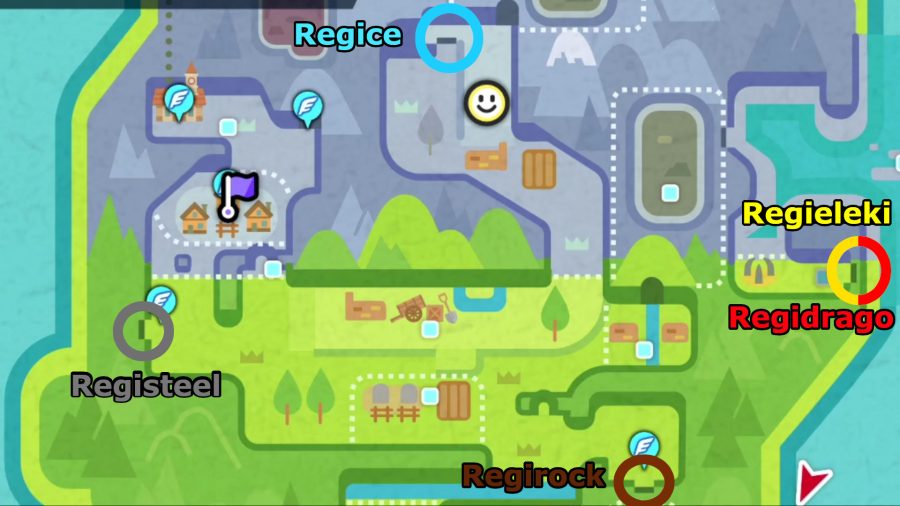 All of the Regis can be encountered again if you make them faint by retracing their pattern on the ground, so there is no need to save in advance. Here are the locations and the ways to access every Regi in the game: 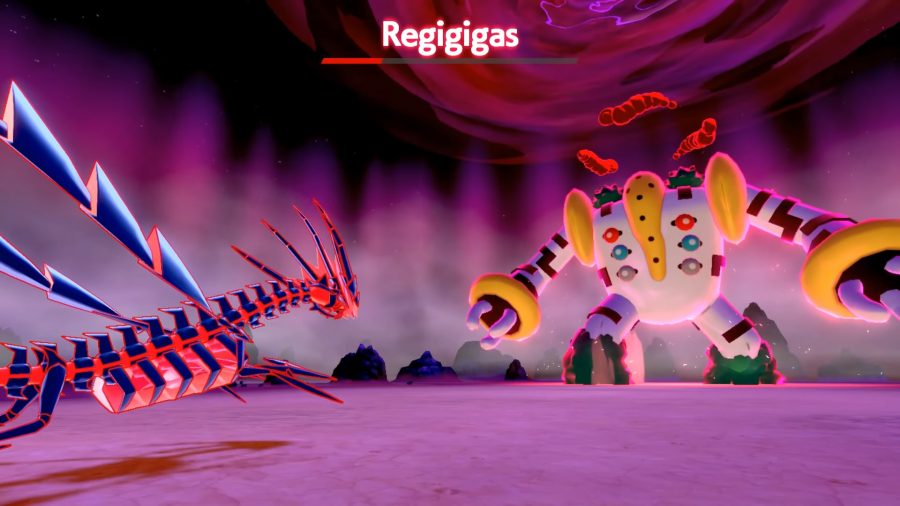 How to catch Regigigas In The Crown Tundra

It turns out you can encounter Regigigas in Pokémon Sword and Shield, but you’re going to have to work for it. To find the correct Dynamax Den, fly to Snowslide Slope. When you arrive, turn around and head back down the slope towards the green area. Just towards the cliff edge, you should be able to see an inactive Dynamax Den with four rocks around it.

In order to activate this den, you’ll need every Regi Pokémon in your party. This includes both Regieleki and Regidrago, so you will have to trade with another player or another profile via Pokémon HOME to get them. Once you have all five in your party, use the Dynamax Den and you’ll be sucked into the den.

A word of warning though: this Regigigas is a Level 100 Dynamax encounter, and you are the only participant. No, we’re not joking. Luckily it has the ability Slow Start, which halves its Attack and Speed. After those five turns though, its stats will be maximised and it’ll ram into your Pokémon with the sheer force of a tank. It does have a 100% catch rate if you do beat it though, so that’s a plus.

And there you have it, that is where to find every single Regi Pokémon in the game. There are plenty of other elusive Pokémon out there to be found, such as the many older legendaries in the Dynamax Adventures, where the shiny chance is dramatically increased.