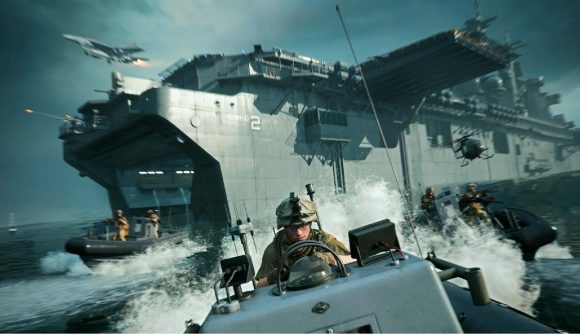 With the Battlefield 2042 release date being delayed to November 2021, EA reportedly informed a number of retailers about the delay ahead of time. A slide from that presentation EA gave has seemingly leaked which details each of the main modes within the game, including All-Out Warfare, which is apparently getting Limited Time Modes.

The slide details the three core experiences Battlefield 2042 will offer, including All-Out Warfare, Hazard Zone (which we know very little about), and Portal. The aforementioned All-Out Warfare section is the traditional Battlefield experience we all know and love. This mode is described as including the game modes “Conquest, Breakthrough, and LTMs”.

This is a somewhat surprising reveal as it was assumed that Battlefield 2042’s Battlefield Portal mode would be the way DICE tried to implement LTMs into the experience. This would give fans the freedom to create unique gameplay modes using assets from both Battlefield 2042 and previous Battlefield games.

The image from the retailer call also confirms all of the Battlefield Portal maps and key innovations the game is bringing, such as enhanced weather effects and destruction.

Of course, we don’t have confirmation that this image has come from the retailer call EA held, but it looks legit and it is so detailed that it would be surprising if this is a mock-up.

LTMs have become a staple of modern multiplayer games but hopefully DICE will be able to throw in some new ideas to help Battlefield stand out from the crowd.