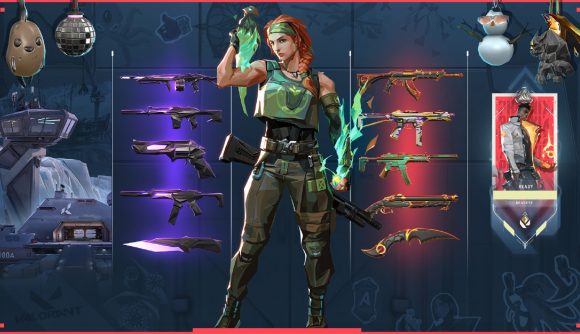 Valorant patch 1.11 included the new agent Skye, a left-handed view model, and unfortunately, a number of serious bugs that left players with some unexpected jump scares. Not only was the patch a bit of a mess, it dropped just before a crucial round of qualifiers for Valorant’s First Strike competition. As a result, Riot has now reverted the problematic patch.

100 Thieves pro player Josh ‘Steel’ Nissan discovered a couple of the bugs, which range from hilarious to straight up disturbing. One sees a distorted, jump scare-worthy texture of Sage appear when walking through an Omen smoke, while another sees every agent on the team turn into land dolphins. While the bugs look hilarious, the timing of such a troublesome patch was genuinely concerning for pro players heading into the First Strike qualifier.

To combat issues like this in the future, Riot will be adding a much-needed test server to Valorant to make sure patches are fully tried and tested by players without having bugs ruin ranked matches or esports competitions. Unfortunately, it isn’t releasing until next year.

For casual players, the rollback won’t have much impact on your play, but if you started the new Skye agent contract, you won’t be able to progress it until the new patch is back up and live.

We'll redeploy later in the week once we can figure out a less disruptive time for the VALORANT First Strike Qualifiers (and have a solution, obviously). If you started the Skye character contract, you won't be able to progress until we patch again. [2/2]

If you chose to start the Skye agent contract and are unsure who to play as while you wait for patch 1.11 to go live again, check out our Valorant agent tier list for help.