Tiny Tina of Borderlands fame is leading the way in her own spin-off game, Tiny Tina’s Wonderlands. Combining some large, powerful guns with some devastating magical spells, players have the chance to take down enemies in a multitude of ways with a selection of character classes to choose from. You’ll be looting and shooting in this fantasy RPG, but how you do that with friends in Tiny Tina’s Wonderlands split screen is up to you.

In this guide to Tiny Tina’s Wonderlands split-screen, we’ve put together everything you need to know to get toting guns and casting spells with buddies in the game. As with previous Borderlands games, you’ll be pleased to hear there are options available to jump in and out with friends. Although there’s no mention of cross-platform so far from Gearbox, if you’re on the same platform, there are plenty of ways to play.

Yes, Tiny Tina’s Wonderlands has a split-screen local multiplayer co-op mode for players to enjoy across both the campaign and end-game content. You can also play online. As seen in Borderlands, you’re able to drop in and out of co-op mode as and when you choose (or when your friends are free to play).

When creating a new Fatemaker, players can choose between two options for co-op mode that will ultimately decide how loot drops and how enemies are scaled. These are:

Either way, you can switch between the modes via the Multiplayer settings in the main menu at any point during your campaign. So, if you find you’re squabbling over loot or feel like you’re up for some more loot grabbing, then you can swap between Cooperation and Coopetition, depending on how toxic you’re feeling. 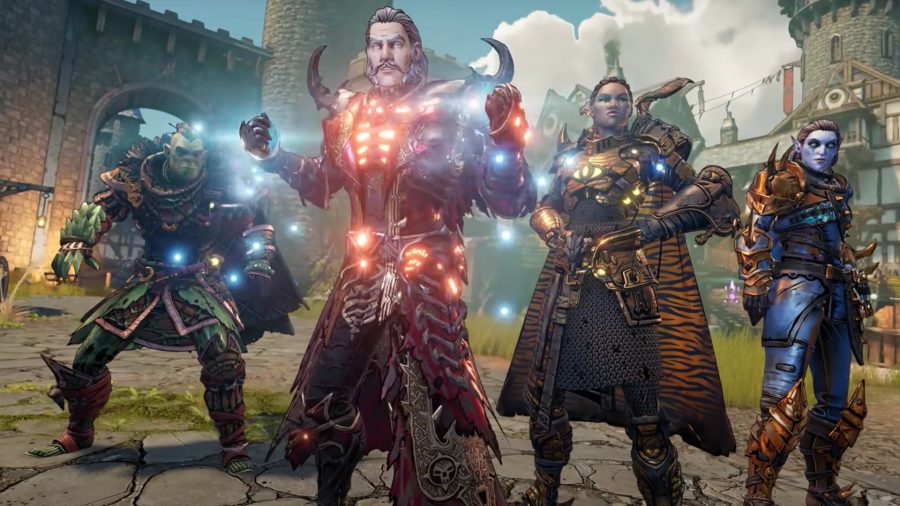 HOW MANY PEOPLE CAN YOU PLAY WITH in Tiny Tina’s Wonderlands split screen?

But, online Tiny Tina’s Wonderlands co-op works in teams of up to four.

Gearbox has made it clear though that in order to ensure the challenge is matched to the number of players you have, Tiny Tina’s Wonderlands does become harder based on how many players you have in your team. So, whilst teaming up with friends to complete levels is beneficial, you want to make sure you’ve got a squad ready for a harder challenge.

CAN YOU PLAY ONLINE AND OFFLINE in Tiny Tina’s Wonderlands split screen?

Tiny Tina’s Wonderlands can be played either in online mode or local split-screen, but, as mentioned above, it depends what console you have.