Borderlands developer Gearbox seems to have taken the high-fantasy route in its new spin-off from the popular RPG game series, Tiny Tina’s Wonderlands. Neither prequel nor sequel, Tina has been granted her own unique adventure – but don’t worry, there are still plenty of big pointy guns mixed in with the magical stuff.

With a star-studded cast, which features Andy Samberg, Wanda Sykes, and Will Arnett alongside Ashly Burch who is reprising her role as Tiny Tina, Gearbox is pumping all kinds of firepower into its new game.

And with such a grandiose cast comes a grandiose quest, as players will be tasked with looting, shooting, and kabooming their way through legions of enemies, with the ultimate goal of defeating the imperious Dragon Lord. It may sound like a cliche tale, but we’re sure Gearbox will find a way to infuse it with its bonkers humour (and did we mention the big pointy guns?)

Here’s everything we know about Tiny Tina’s Wonderlands so far, including its release date, how its gameplay’s shaping up, and which platforms you’ll be able to play it on when it drops 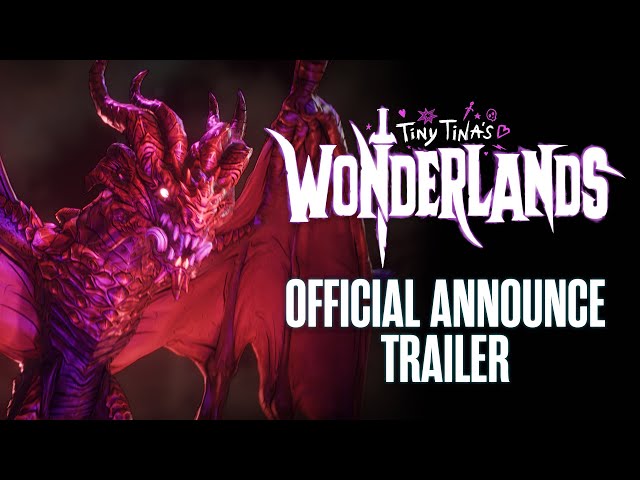 Tiny Tina’s Wonderlands will release on PS4, PS5, Xbox One, Xbox Series X|S, and PC via the Epic Games Store and Steam.

It is currently uncertain whether or not full cross-play support will be available on launch, as Borderlands 3’s was limited. Xbox One players could play with Xbox Series X|S players, but not with those on PlayStation.

The first gameplay for Tiny Tina’s Wonderlands just debuted at the PlayStation Showcase and it looks like a traditional Borderlands game. However, it has some of the fantastical twists that have been mentioned beforehand.

You can take a look at the Tiny Tina’s Wonderlands gameplay below:

Tiny Tina’s Wonderlands has brought in the big guns – and its cast is pretty spicy too. Alongside the titular Tina, players will be joined by Andy Samberg as “the headstrong captain Valentine”, as well as the “rule-obsessed robot Frette” – voiced by Wanda Sykes. The Dragon Lord himself will be portrayed by Will Arnett.

That’s all we have on Tiny Tina’s Wonderlands for now, but we’ll be sure to keep this page updated as more is revealed between now and launch.