About eight months ago, I sat in Team Vitality’s brand new training facility in Paris’ iconic Stade de France, and nattered away with Rocket League coach Mike ‘Gregan’ Ellis and young prodigy Kyle ‘Scrub Killa’ Robertson. The pair helped Vitality win a World Championship and were preparing to solidify the French organisation as the best Rocket League team in the world. Just two months later at the turn of the year, both had left.

For Gregan, there followed a long period away from the responsibility as a head coach. For Scrub Killa, instability became the theme of 2020. After his exit from Vitality, he moved to mousesports – but this opportunity was cut short due to disagreements over contracts. What came next was a lengthy spell without a team, where the Scot filled his time with streaming and the occasional tryout.

Now though, the double act are back, and part of the very first esports roster to be fielded by Guild Esports. The new UK-based team (backed by England legend David Beckham, no less) has dived straight into the intense, reimagined world of Rocket League esports and got its debut outing as an organisation in the first stage of the European division of RLCS X.

So eight months on from our first chat, The Loadout rounded up Gregan and Scrub Killa for part two. Reunited, and at a new team with a very young roster, has that past desire to become world champions weakened? Not a bit.

The Loadout: How does it feel to be reunited?

Scrub Killa: I think it’s great to get him back. I’m really really excited for what we can achieve together again.

Gregan: Yeah, and from my point of view we had about six months apart and in that time I learned a lot about how to improve on my style of coaching. I spent time to develop a broader understanding of Rocket League that I could apply to whichever team I came across after Vitality, and hopefully Scrub has seen those differences in me. I’ve also recognised that he’s got a lot more mature. He’s now played with different teams, and in that time we’ve both developed a lot and we’re both ready to work together again.

What was the process for forming this team then, Gregan. Were you the first in the door and tasked with building this team?

G: Once I was freelance I went looking around for opportunities and got connected with Guild. I started chatting to them and they wanted Rocket League to be one of their launch games and needed someone to scout out a team. So I said ‘of course I’d love to help out.’ Then as the scouting process went along and they revealed more things I got more tempted. Like the reveal of David Beckham was the final tick in the box for me to say ‘yes I really want to be a part of this’, so we started to build a relationship and I loved the convos we were having about Guild’s future.

The fact they shared my vision of a holistic approach with in-person bootcamping and health-focused training also sealed the deal. The scouting process was very much “watch and wait” and then when Scrub started trying out with Singularity it all kind of made sense. A young team, with a lot of potential and a big name in Scrub, who I’ve worked with before, that I believe in to be next world champions. So that was the process.

Is this like a perfect scenario for you Scrub? You’ve had a turbulent 2020 so far with leaving Vitality, to your short stay at Mousesports, to streaming for a while. But is a brand new org with a fresh team the best way to push the reset button and in a way start over again?

S: Yeah definitely, like this season there’s no LAN and that so it’s like a miss of a season anyway. So if there was any season for all that stuff to happen it was this one, so it didn’t affect me that much. But I’m super excited with all the new stuff being announced in Rocket League and it’s the perfect time to join an org like Guild.

How quickly did you bite Gregan’s hand off when he offered you this opportunity?

S: Well it happened like two months ago, right?

S: But yeah it all happened pretty much instantly. I actually messaged Gregan in the first place.

G: Yeah, Scrub sent me a message saying he was looking for teams to join and he basically said: ‘Hey, whichever team I join I know you’re free right now so it would be good to get you in the conversation with that team.’ So even when we both left Vitality we both kept in close contact.

I helped Scrub with a few of his issues he was having, and it’s one of those things where once you’ve worked together for a year and a half, it’s very hard to then move on and separate totally from that person. We’ve spent so much time building up how to work together well that it seemed a shame to never get that chance again to go for another World Championship.

Talk us through this Guild roster then Gregan. They’re a young trio, but what do they all bring to the team?

G: Well in Thomas ‘Th0’ Binkhorst and Joseph ‘noly’ Kidd you have a duo who have stayed together for quite a while. They really want to work together and they were looking for an experienced, top tier player to help take them to the top and that’s why they tried out Scrub at Singularity and why they worked well together.

From my point of view, I think this is the team I’ve got on the best with, ever since I started coaching. Like last night we were on a call for two or three hours just chatting, you know. And we’ve been chatting after scrims. I’m sure Scrub feels the same, I don’t wanna speak on his behalf here, but it seems like the team gets on really well.

Do you agree with that Scrub? Is there a strong dynamic between you all?

S: Yeah, I do get along really well with this team. Obviously I did get on well with the guys at Vitality and mousesports as well, but we’ve all got a lot in common, we’re all pretty much the same age, and we’ve all got the same outlook I guess. So yeah it’s really good.

Last weekend was the team’s first run out as Guild in the RLCS X EU qualifier. How do you think you guys performed?

S: I think we could have performed better, but we’re still a new team and I’m happy with how we’ve improved already to be honest. So I really hope on Saturday we’ll actually be able to really pop off, because I think against the best teams in the world we’ll play a lot closer to our best as opposed to when we play a lower down team.

We qualified for next week! Not really the way we wanted to do it, lost a bit of steam after all those hours but i’m really confident for next week 😀

G: Also it’s a new format, and there’s a lot to learn. I think the fact that it’s such a long day with long breaks between games and that we play such a variety of teams – some of which we’ve never played before. It’s a whole different preparation process than any of us have ever experienced.

Before, you would know who you’re playing weeks in advance and formulate a plan, but we were playing from like 2PM to 11PM, which is a really long day. The fact the boys were able to push through in that final game in the Swiss to get the win and progress, that’s something people don’t realise is as hard as it is. That’s a hard win to pull off. That was a relief for me, as there’s not a lot of players out there who could turn a two game losing streak into an important win.

What are the realistic expectations of this team for RLCS X?

G: There we go, that’s what I like to hear. You know what? It’s possible, so why would setting any other goal be the right approach?

S: If I never felt like I couldn’t win them [championships] then there’s no point me being a pro player.

G: Scrub’s been there before, I’ve been there before, noly and Th0 have won tournaments before as well, so they know they’re capable of beating any team when they get there. It’s a long, long season, so we can’t think about that goal of winning the World Championship right now. We have to take each game as it comes. But that’s the ultimate goal, to be the world’s best team and win the World Championship. 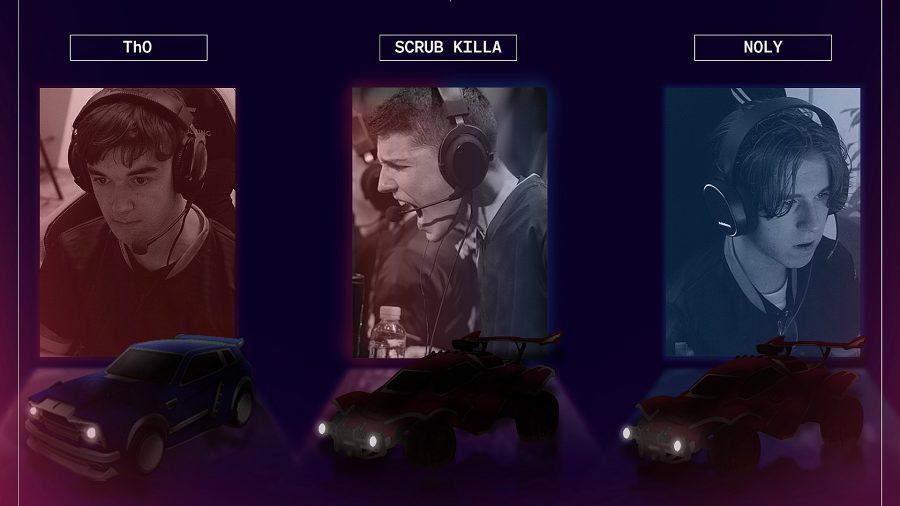 If you were to become RLCS X champions, would it mean more now than when you won back in the Vitality days?

G: Oh absolutely. This is the first year-long RLCS season so it means so much more than the bi-yearly ones we’ve had, and it’s also the most accessible RLCS has ever been; any team can technically win the World Championship. So the amount of games you have to win to win the whole thing is crazy. The Swiss tournament last weekend had more games in it than a full season of RLCS in the past – and we have nine of those, plus three majors, plus The Grid. So the amount of games that are required for these guys to prove themselves and be that world champion at the end, it’ll be so much more rewarding.

S: Also I knew as soon as I won the first one that it was gonna feel even better the second time round. And yeah, with the season being twice as long it’s definitely going to be better.

Related: Our guide to Rocket League ranks, MMR, and more

It’s always hard for new names in esports to stand out from the crowd, but do see Guild being able to grow into a top organisation in the future?

G: Definitely, we’ve got really exciting plans coming up in the future, whether that be with Rocket League or other esports, the academy structure that’s going to be coming soon is incredibly exciting. The innovation of how we look after gamers, the holistic approach, the idea of developing a path to pro through the academy, plus all the experience of a guy like David Beckham, it’s so exciting to be a part of Guild. To have a clean canvas to do it right from the start is awesome.

S: Plus when we win them a world championship they’ll definitely be a big name then…

Guild’s Rocket League roster are in action again this weekend in Stage 2 of the RLCS X EU Fall split.