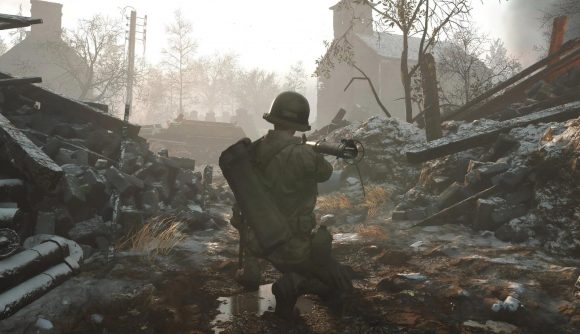 Having spent most of its life so far in early access on Steam, the hotly-anticipated porting of Hell Let Loose – an intense, mass-scale World War 2 tactical shooter – to new-gen hardware has already been met with solid reviews.

With developer Black Matter also making the bold decision to release the PlayStation 5 version of the game for free as part of October’s PS Plus line-up – a move the studio’s CEO Max Rea believes will open the door to a lot of players – it’s clear that it’s looking to emulate the successes of other day-one PS Plus titles like Fall Guys.

As those fortunate enough to get their hands on new-gen consoles gradually get into the action, many will undoubtedly want to squad up and take part in the game’s huge 50 vs 50 battles with their friends, some of whom are still using last-gen hardware. Unfortunately, as Rea tells The Loadout, Xbox One and PlayStation 4 players shouldn’t hold their breath for a last-gen port.

“At the minute, just knowing how complex it’s been to get it to the next-gen, I’m not sure [if Black Matter will bring Hell Let Loose to last-gen hardware],” Rea says. “If I’m shooting from the hip, I would say no just to give kind of a hard and fast answer.”

Hell Let Loose is OUT NOW on PlayStation 5 with PS Plus & Xbox Series X|S! pic.twitter.com/83dvJL43Bl

According to Rea, the development of Hell Let Loose’s new-gen port hasn’t been easy, as it required translating design elements originally developed for PC players. “What you see on console is a result of us having to really live develop the game during our early access period,” he says. “And then also as a result of taking a game that wasn’t built with console in mind, and then trying to make it work on console.”

For now, Rea says that Black Matter’s focus over the coming months will be on homing in on and improving the console experience. To Rea, bringing Hell Let Loose to console has been eye-opening for its developers, and has helped the studio solidify its approach going forward. “Designing for console, which is obviously far more restrictive than PC, has instilled a sense of proper design principles,” he says.

If you’ve already gotten your hands on Hell Let Loose, and want to hone your leadership skills, then check out our Hell Let Loose Commander guide to learn more about the art of war.