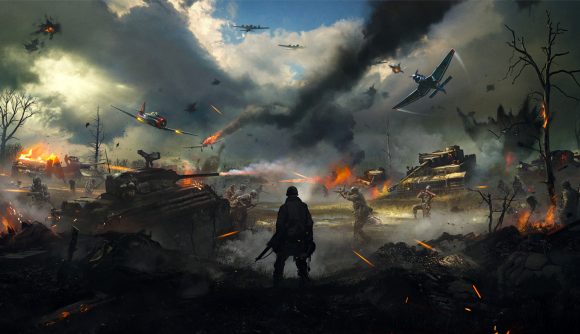 When Hell Let Loose was rumoured to be a part of the October PS Plus line-up, many raised an eyebrow. Tactical first-person shooters rarely made the list, let alone headlined it, but here was Black Matter changing the status quo. Now days on from the announcement, the indie studio’s CEO and lead developer is relishing the opportunity presented to him.

“Hell Let Loose started out as a hobby project that I used to do in my spare time,” Max Rea tells The Loadout. “Now that hobby game is on PlayStation Plus, which is extremely wild. I’m absolutely delighted, and we’re very excited to see what console players make of the game.”

Hell Let Loose on console has been a long-time in the making, and it’s not been without its problems. Rea is very frank that the development of the game generally has been fraught with problems – often joking that his team has made three iterations of the game over the years during its journey to early access, full release, and console. And while there’s still more work to be done, Rea is quietly confident that his game will find its audience on console – especially with the help of PlayStation Plus.

“This type of game – particularly on console – is a very foreign animal, so the PlayStation Plus deal is a fantastic opportunity to create a very, very low barrier to entry to the people who might want to check out this genre,” Rea continues. “We expect many people will say ‘this is really not for me’, but we’re also hoping we will tap through to others.”

However, Rea knows that Hell Let Loose is releasing on console in a tricky month with the release of Battlefield 2042 and Call of Duty: Vanguard imminent. However, despite the established competition, he believes Hell Let Loose and its “core DNA” will win over some new fans.

“PlayStation Plus is a really wonderful way of quickly introducing Hell Let Loose to a new audience,” he says. “We’re hoping that in the process, some people will stick around and it will be the type of game they’re interested in long term. But we fully expect those who love Call of Duty or Battlefield will be well served coming into the end of this year. Either way, it’ll be interesting to see what happens next with player numbers and how much the console audience enjoy playing it, but I feel like if anyone’s going to do this experiment, it may as well be us.”

Rea often refers to the PS Plus inclusion as an experiment, and well, he’s not wrong. There’s never been a game like this on the service before. So, as far as Black Matter is concerned, this is untested waters, and Rea and his team are excited by the opportunity.

Hell Let Loose officially launches on PS5 and Xbox Series X|S tomorrow. You can catch more of Rea’s thoughts on the game on The Loadout later this week.