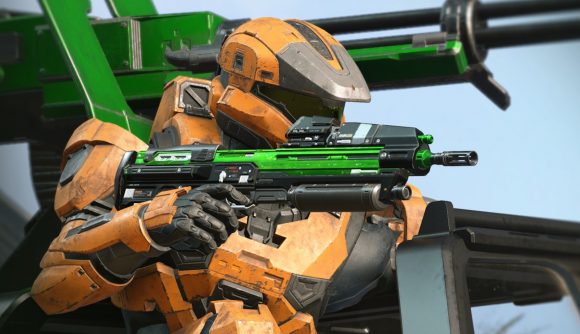 From December 8, Ultimate members will receive the first of many monthly multiplayer bonuses to help them grind the Halo Infinite ranks. The first bundle includes the exclusive ‘Pass Tense’ weapon coating for the MA40 Assault Rifle, which will probably slip its way into our best Halo Infinite guns guide at some point in the near future.

The bundle also comes with four 2XP boosts and four challenge swaps, which are perfect if you’re stuck with some obnoxiously difficult missions that you can’t be bothered to complete.

It’s unclear what future multiplayer bundles will include, but Microsoft is starting December’s off with a bang. If you want the shiny Xbox green gun and you don’t have Ultimate membership already, you can sign up for that below.

Now is the perfect time to jump into Halo Infinite ahead of the campaign release next week. 343 Industries has just tweaked the progression system, allowing you to earn XP towards your battle pass with ease, and it looks like loads more Halo Infinite weapon variants could be on the way too.