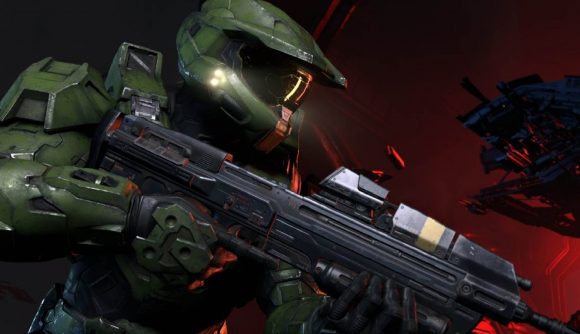 The Halo Infinite weapon variants that have been datamined by ‘GreenKnight’ and ‘HaloNoticiasMX’ on Twitter list more than a dozen weapons which could get new versions in a future update from 343 Industries.

These weapon variants include the Convergence Bulldog, which has a tighter pellet spread and larger magazine. The MA40 Longshot variant shrinks the magazine, but increases the aim down sights zoom to 1.65x. The S7 Flexfire alters the sniper rifle to have a ten round mag at the cost of a larger hipfire crosshair. The BR75 Breacher acts like the regular battle rifle, but fires faster and has a smaller magazine.

The Rapidfire Pulse Carbine is a simple variant, only increasing the fire rate of the weapon. The Riven Mangler fires slower than the regular version, but releases three bullets per shot. The Striker Sidekick offers better accuracy and a 14 round magazine currently. The Purging Shock Rifle shoots out a five round burst, instead of a three round one.

You thought we were done? Nope, there are more. The Calcine Disruptor comes with less ammo but causes a tiny explosion on the target after the shot is fired. The M41 Tracker rocket launcher tracks vehicles.

The final set of weapons that have been datamined are a unique Cindershot, which appears to have larger explosions. The Unbound Plasma Pistol, which deals more damage and has bigger projectiles. The overcharge also shoots several projectiles.

The Pursuit Hydra has better tracking, while the Pinpoint Needler is slightly more accurate thanks to better tracking projectiles. The Impact Commando has a 40 round mag and right now it is “insanely accurate”. Finally, the Arcane Sentinel Beam deals more damage and has an 80 round mag.

These weapons aren’t in the game yet and might never be added, possibly just being leftover files from Halo Infinite’s development. But, nonetheless it would make sense for 343 to add these in to help keep the multiplayer fresh as we continue with new Seasons and events.