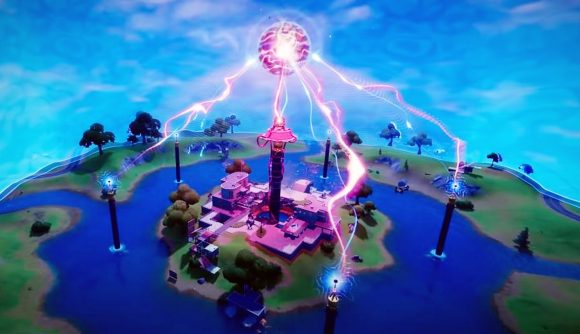 Epic Games has become an expert on how to produce amazing live events in Fortnite, and fans piled into both the game itself and streaming platforms to witness its latest event, The Device. With the end of Chapter 2: Season 2 being delayed on multiple occasions, fans were especially keen to see what was in store for Season 3, which begins officially on Wednesday.

Even before the event began, Epic announced that it could let no more players into the game itself to watch the event for stability issues, revealing that there were already 12 million players on the servers. This even included Epic’s own creative director, Donald Mustard, who instead directed players to watch via livestreams instead. And boy, did they.

On top of the 12 million watching in Fortnite itself, at least 8.4 million more were tuning in on streaming platforms, bringing the total audience to well over 20 million. YouTube Gaming saw the biggest chunk of viewers, with a peak of 6.1 million concurrent viewers, according to esports journalist and consultant Rod ‘Slasher’ Breslau.

Twitch also saw a peak just shy of 2.3 million, making it the second most watched event in the platform’s history behind this month’s PS5 reveal.

We were overwhelmed by the response to The Device. At 12M players in-game, we capped participation for stability while 8.4M more watched live on Twitch + YouTube. As we push the edge of what live-events can be, we’re improving systems so more of you can experience them in-game. pic.twitter.com/YTycsB1Zoh

For streamers, it was an extremely good day at the office, with many recording their best ever viewership figures as a result of Epic having to cap the number of players allowed to watch the event in Fortnite.

Across all platforms, the most watched streamer for the event was Lannan ‘LazarBeam’ Eacott, who tweeted that he drew in a mind-blowing peak audience of over 900,000 on YouTube Gaming. Over on Twitch, Spanish streamer David ‘TheGrefg’ Canovas saw a crowd of over 350,000.

The likes of Jack ‘CouRage’ Dunlop also revealed that The Device event resulted in the most viewers he’d ever had for a livestream.

Whether it’s in-game concerts or moments to signal the end of seasons, Fortnite continues to lead the way in creating live events that really grab the world’s attention and break viewership records, despite general interest and viewership of the game has been tailing off somewhat from its heyday.