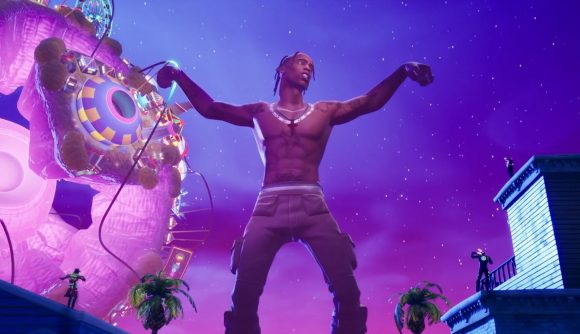 Fortnite has been creating unique experiences in game for its players for years. From DJ sets to black hole season launches, Epic Games isn’t afraid to push the boat out and try something new, and it usually always lands. Today, Epic Games announced that the full Travis Scott experience, which lasted four days, pulled in more than 27.7 million unique participants.

The Astronomical event, which featured a short 15 minute set from the rapper, immediately broke records on its debut night, pulling in more than 12.3 million at one time, beating the previous record of 10 million set by DJ Marshmello. But the collective figure is so much more impressive.

With the majority of the world still in lockdown due to the ongoing coronavirus pandemic, the Astronomical event, which put players through time and space in game with the rapper, allowed players to experience something social in an online format.

However, it hasn’t done much for viewership. As the event is much better experienced, more players jumped into the free battle royale than they did to watch it on Twitch, according to latest figures.