Far Cry 6 has already been a pretty big success for Ubisoft, with players loving the location of Yara and the gameplay changes the studio has implemented. Because of this, players are hungry for more content outside of the main story. Alongside a number of pieces of free DLC, Ubisoft has three DLC packs called Become The Villain that let you play as villains from across the series’ history.

But when can players expect the Far Cry 6 DLC release date so they can experience the three DLC packs which are available to buy separately or with the Season Pass? Each one will offer a unique dive into the mystery surrounding the lives of Vaas Montenegro, Pagan Min, and Joseph Seed. Plus, there are various other Special Operations and pop culture-inspired missions that will also be added to the game, so there are plenty of Far Cry 6 DLC release dates to keep tabs on.

Here’s a rundown of all the bonus DLC content for Far Cry 6 and when you can get your hands on it all.

The final DLC mission release date for Far Cry 6 is March 24, 2022, with the Stranger Things mission titled “The Vanishing”.

The Far Cry 6 paid DLC release dates were set for November 2021, January 2022, and March 2022. All three experiences can be purchased individually or come as part of the Far Cry 6 Season Pass.

Also included in the paid Season Pass is the remaster of Far Cry 3’s Blood Dragon spin-off experience, which was released in December 2021.

Finally, Ubisoft has planned three crossover missions with famous people or franchises. December 2021 saw the mission Danny & Dani vs. Everybody added to the game, which brings in actor Danny Trejo. In February 2022, Far Cry steps into the jungle with a Rambo crossover mission called All The Blood. Finally, March 2022 will take you to the upside-down with a crossover mission based on Stranger Things called The Vanishing. 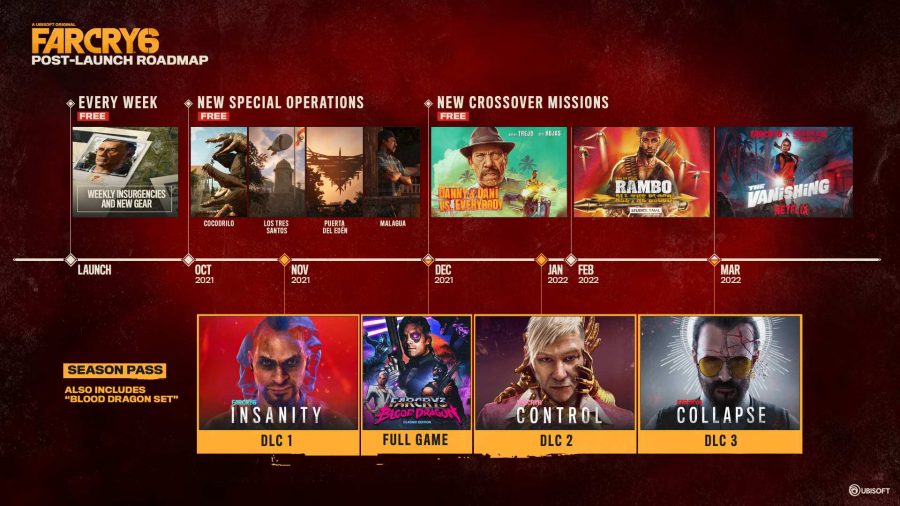 That covers everything we know about the Far Cry 6 DLC release date. If you are working your way through the game and want some tips, why not check out our Far Cry 6 walkthrough.