I’ll admit it, FromSoftware games scare me. For years I have had Dark Souls 3 tucked away collecting cobwebs in my Steam library, daring me to install it. And though I have spent hours watching friends and streamers play through the likes of Bloodborne and Sekiro, I myself never got involved because – and this may come as a bit of a shock – I’m not particularly great at these kinds of videogames.

So when I was offered the opportunity to attend a preview event for Elden Ring – a game which has already been praised for the ways in which it onboards new players – I knew that if I was to ever indulge in the delights of a FromSoftware world first-hand, now would be the time.

In preparation for the adventure ahead, I nervously dusted off Dark Souls 3 and spun it up, and it went about as well as you can imagine. Slowly whittling my way through the Cemetery of Ash was simple enough, but when Iudex Gundyr appeared I quickly realised that I was in no small amount of danger.

After several rounds of having my cheeks clapped I finally got the better of the first boss, but it did leave me wondering whether or not Elden Ring would feature a similar jump in difficulty. Of course, there’s no point to a Soulslike if it doesn’t pose a challenge, but when the day came and I finally booted up Elden Ring, I was pleased to find the difficulty curve had been flattened somewhat – at least at the beginning.

Like all things, the best way to get progressively more proficient is through gradual increases in repetition and difficulty – Arnold Schwarzenneger didn’t become Mr. Universe in a day, after all – and this is something Elden Ring sets up well for players new to the genre. 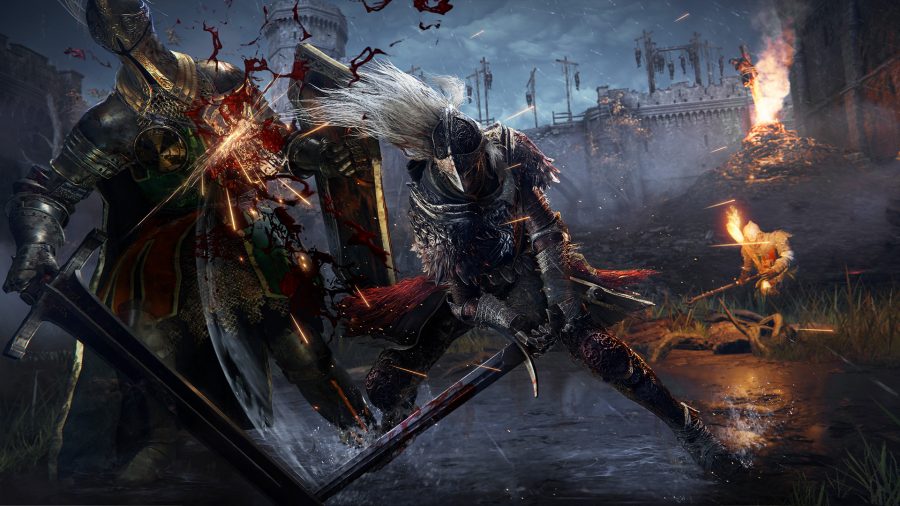 The slight hop in difficulty from doddering zombie to human soldier – the first two enemy types you’ll encounter – is more than enough to help you get to grips with Elden Ring’s controls, even if you haven’t played using FromSoftware’s slightly unorthodox scheme before.

After assuming the role of a Samurai – one of the new Elden Rings classes – I spent the first hour or so testing the waters. The scariest enemy I encountered was a powerful troll, and even then its big, sweeping attacks offered ample opportunity for me to train my timing of attacks, blocks, and dodges. As I grew in confidence, I began experimenting with how I dispatched each enemy, further deepening my understanding of the game’s systems, and expanding my own limits as a player.

Naturally, there were times when I found myself without a paddle, as I’d approach a settlement with but a sliver of health and an empty flask to my name. Fortunately, I could avoid a number of encounters entirely thanks to Elden Ring’s stealth mechanics, which allow me to sneak past mobs by crouching and moving through cover. Health is the most important thing in Elden Ring, and you often have to make a choice between protecting what’s left of it or risking it all for the possibility of finding more Runes and refilling your flasks.

The more I explored Stormhill and the surrounding Elden Ring regions, the more varied (and weirder) the enemies and their attack patterns became. But I never once felt like I was being set up to fail, no matter how far from the next point of story progression I strayed. And on the topic of finding your way through Elden Ring’s ~30 hour campaign, I discovered combat isn’t the only area where FromSoftware has tried to make things easier for those who need it. 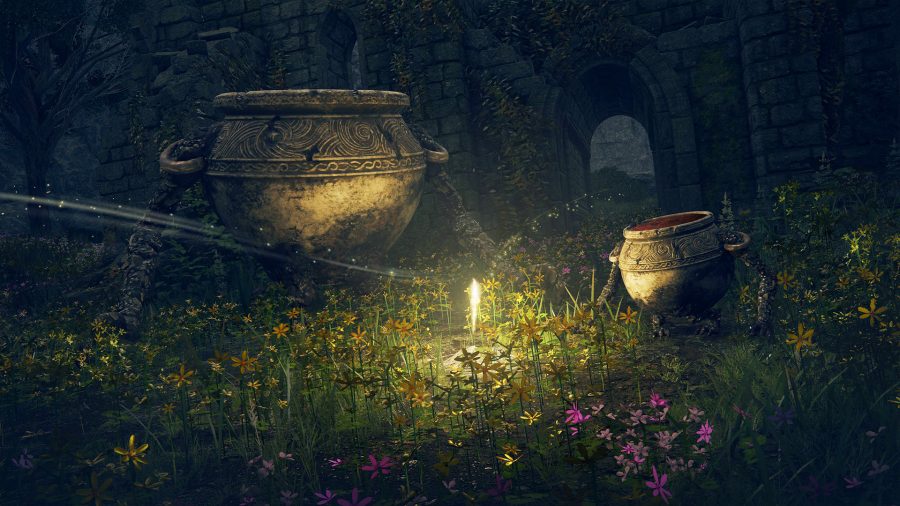 Each main checkpoint, known as ‘Sites of Grace’, emanate a short stream of golden light, gently nudging you in the right direction for advancing the story – though if you’d rather meander off into the unknown then, in traditional FromSoftware fashion, the reigns are quite literally given to you. Acquiring Torrent, our trusty steed, early on makes traversing The Lands Between a breeze, though should he fall, you will have to use one of your flask charges to resurrect him.

Elden Ring never forces you to choose the less-masochistic option

Similarly to the aforementioned stealth mechanics, Torrent also allows you to be more selective in the battles you take. If you’re struggling to make it through a passage of enemies en route to the next point of safety, then hopping on your horse can help you get out of dodge. I’m sure there will be FromSoftware diehards furiously gritting their teeth at the prospect of their precious games possibly being made easier, but Elden Ring never forces you to choose the less-masochistic option.

Even what I’ve experienced of Elden Ring’s story so far is daintily delivered in a way that players can easily digest – though this is very much business as usual for FromSoftware’s storytelling. By one Site of Grace I encountered an embattled girl in a red hood, slumped up against the remnants of someone’s home. Although what she has to say is important to understanding Elden Ring’s world, it’s never a full-on info dump.

You’ll also come across NPCs further afield which are full of cryptic teasers regarding potential side quests or points of interest, though who knows at which point their words of wisdom (or warning) will come in handy? A dishevelled hag with the power of foresight, perched upon a crumbling bridge offers me one such nugget of information. A marker will never appear on the minimap, so the ‘oh shit’ moment when I eventually reach it will be all the sweeter.

After spending much of my time roaming around, slicing up beasties, and swotting up on lore, I felt things were going pretty well – that was until I reached Roundtable Hold, the central hub where adventurers gather. While looking for an exit (note: I forgot about fast-travelling at this point), I jumped down into its main hall, prompting the invasion of Mad Tongue Alberich.

At first I thought that this was just another pseudo-tutorial, but after Alberich proceeded to fold me over like a wet pair of trousers over a radiator – my Runes falling out of my pockets in the process – I realised that, like with Gundyr, I had a bit of a problem on my hands. 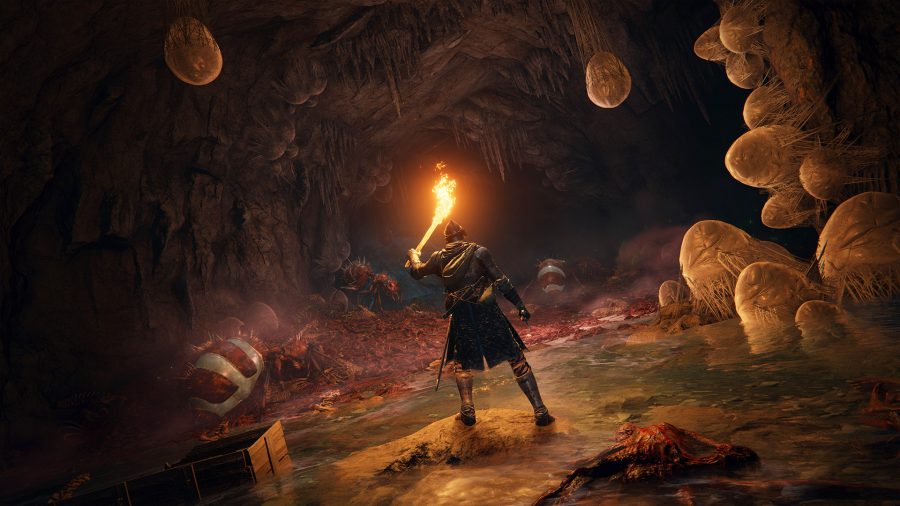 After several more attempts, I managed to whittle the scythe-wielding mage down below half HP. Alberich’s expert use of ice magic to protect his melee attack wind-up was commendable, but I now had him on the back foot – tha was until it transpired he too had an Estus Flask, which he proceeded to juice himself back to full health with. Needless to say, I was not a happy bunny.

No matter how many times I went back down there in the hopes of picking up my Runes and scarpering, Alberich was waiting for me. There was no escape, no fast-travelling away, so I’d either have to wring out my lost fortunes the hard way, or take the loss and move on. Half an hour later, and I’m leaving Roundtable Hold downtrodden, sodden, and with several stains on my pride. I’ll be back, Alberich.

Despite my unfortunate encounter, I came away from my time with Elden Ring with hope in my heart. For the first time, the prospect of making my way through a FromSoftware game wasn’t daunting to me. And maybe, just maybe, I too could ‘get good’, and evolve into that smug friend who gets to flex that they’ve beaten one of these legendary titles.

Elden Ring isn’t an easy game by any stretch of the imagination, but from what I’ve experienced so far it could very well be a new player’s best shot at developing their skills without it being a completely miserable affair. This alone is enough for me to hop aboard the hype train ahead of the Elden Ring release date later this month.