Sentiments towards style have always been perhaps unwittingly significant to the otherwise nightmare-filled Souls series. In a series full of punishingly difficult games, it has always seemed rather counter-productive to purposefully outfit your character with what is more often than not weaker gear.

Yet, a love of in-game fashion and a consistent desire to look cool has overpowered the necessity to efficiently min-max yourself to victory. Of course, there are some negatives that come with the lower equip fashion builds, but there is no greater benefit than the satisfaction of beating a boss and looking fresh while doing so.

The general idea of style in FromSoftware games has taken form within the ‘FashionSouls’ community, of which a subreddit boasting over 79,000 members acts as their proverbial runway. And with the latest release of Elden Ring – a game with an overwhelming amount of flavourful armour sets – never has there been a better time to show off your Elden Bling.

Even from the moment you start the game you are treated to some scintillating outfits, with slices of cloth to suit just about anyone’s style presented before your very eyes. Couple that with the impressively detailed character creator and you have the recipe for an involved role-playing experience.

Role-playing takes centre stage in bringing the fashion in Elden Ring to a new level; the flexibility to mould not only your clothes, but your weapon, build, and visage to all match the look that you were going for. It is the first time that a Souls game has let you endlessly change the appearance of your character at any point and that really does assist in reaching the perfect look for many outfits. 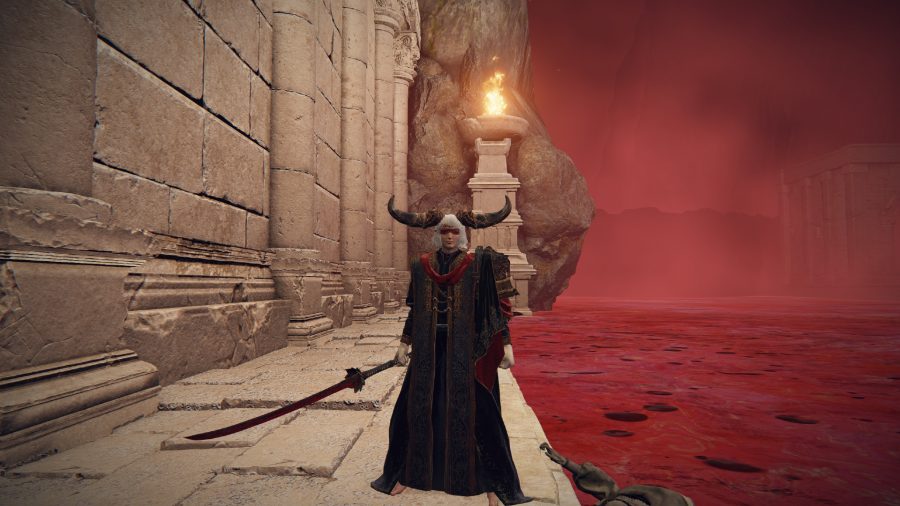 It is almost akin to cosplay in a way, by giving players the tools to so easily look how they want – but more specifically, like someone or something else. You are able to create an idea of a character in your head, assume an identity and replicate that visualisation in game at any point.

For example, after following White-Faced Varre’s questline you could become enamoured with the idea of the Lord of Blood, and devote yourself to the teachings of that faction. With that, comes a character change and a new outfit to go with it. It is not just a case of equipping a pre-selected armour set (but that definitely has significance) but instead carefully curating a look from all parts of your proverbial wardrobe. Minor flourishes can be the icing of any outfit too – for example, the outfit above not only possess a red bandage over the eyes, but the sigil of the Lord of Blood hidden underneath.

The armour sets of bosses are thrown at you at an alarming rate, almost begging you to resume their form

Beyond the imaginative realm of conceived identities, Elden Ring enthusiastically invites its players to cosplay many of the game’s most visually striking characters. In previous Souls games, players had the opportunity to transpose the remnants of defeated foes, often gaining a new weapon with the occasional chance to gain their armour as well. In Elden Ring, however, the armour sets, weapons, and spells of bosses and even NPCs are thrown at you at an alarming rate, almost begging you to resume their form after death. It is an opportunity that is rather difficult to dismiss, and can really bring an extra triumph to what are already rewarding fights. What better way to relish in the thrill of finally defeating Malenia than to reflect that insane damage upon the unfortunate enemies of the Lands Between.

Some players have even been able to faithfully cosplay as entities from other games, with the Nazgul from Lord of the Rings and Kratos from God of War being particular standout outfits. The best thing about these particular outfits is that they are relatively simple and pull mostly from existing sets in the game with minor adjustments. The Nazgul for example looks to be mostly Fia’s cloak and hood, but with the added touches of heavier gauntlets, leg armour, and the right weapons. The same is true for Kratos, which can technically be achieved from the start of the game – as it is mostly just the Champion set without headgear alongside clever use of the game’s extensive character creator. 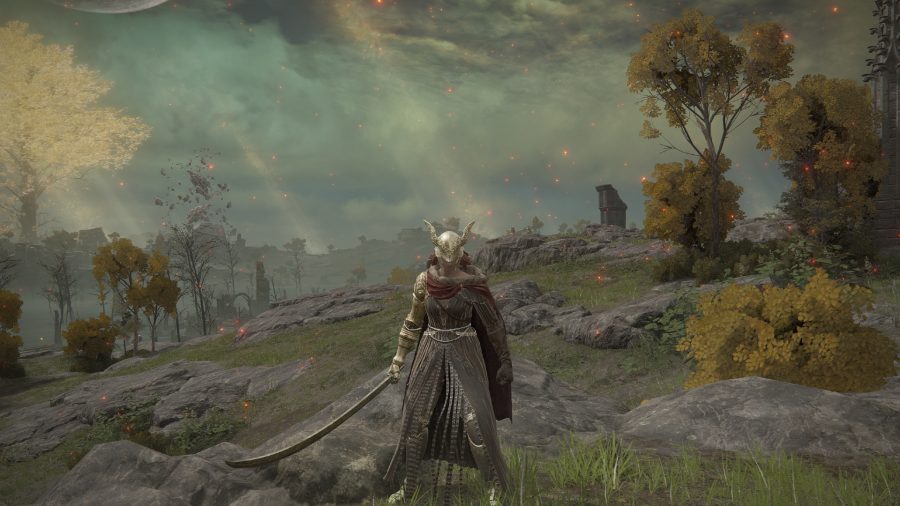 This idea of cosplay completely aligns with the philosophy that fuels the transition from the ‘Dark Souls’ format to Elden Ring – to be and play exactly how you want. Removed is the notion of being ‘locked in’ to anything in the game, be it stats, weapon, or even character design and instead comes forth a push to experiment and transform.

As the world changes your character is bound to change too and never before has it been so easy to reflect that in game. Had a particularly tough run in with a Black Knife Assassin? Stick an eye patch on your battle-hardened hero. On your 200th hour and still not finished? Maybe age your character and become the weathered old knight that your time toiling through the Lands Between deserves.

The Souls series games have always had relatively loose narratives but it can be within fashion and cosplay that new stories – crafted by the player themselves – can be unlocked. Part of every role-playing experience is reflected in the image the character presents, but Elden Ring uniquely offers the opportunity to tell (or re-tell) stories adjacent to the game’s own narrative. Fighting Starscourge Radahn with Malenia’s set allows the player to re-enact the legendary war of The Shattering, while fighting as Radahn will allow you to do the reverse.

There have never been more ways to make your character look the best they can possibly be, but it’s clear that through the Elden Ring fashion game, you can take the game to a whole new level. So embrace the abundance of fashion that is gifted to you and cosplay yourself through your adventure in the Lands Between.

Become who or what you want to be, even if sometimes that might so happen to be someone else.