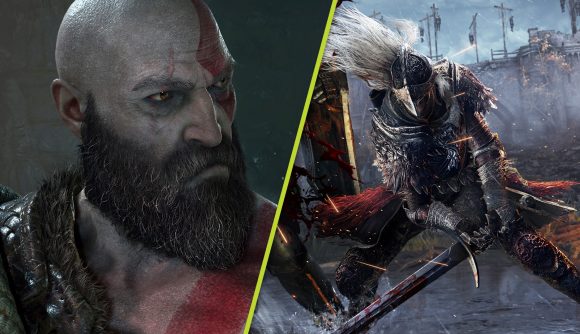 Elden Ring loves a good diety. There’s the Empyrean Queen Marika, alongside her numerous demi-god offspring. Then you have Malenia, Miquella, and Ranni, Marika’s three direct Empyrean descendants. But what if another god appeared – a god of war, perhaps? Well, thanks to one imaginative Redditor, Elden Ring Kratos is now a thing.

Sharing a screenshot of Kratos to the official Elden Ring subreddit, ‘DidioBrando’ has done an immaculate job recreating God of War’s main character. From his lustrous beard to the war paint across his eye, Elden Ring’s character creation tool has certainly been well-utilised here.

To get the look for themselves, players will have to hunt down the Champion Pauldron, Zamor Bracelets, Radahn Greaves, and a shiny pair of Magma Blades. The Champion Pauldron is the starting armour for the Hero class, but can also be purchased from the merchant in south Caelid. For the Zamor Bracelets, defeat the Ancient Hero of Zamor at the end of the Giant-Conquering Hero’s Grave in the Mountaintops of the Giants area.

As the name suggests, the Radahn Greaves can be purchased from Finger Reader Enia at the Roundtable Hold after you have defeated the demi-god himself. And finally, those gorgeous molten blades can be farmed from lizardmen found wielding them over at Volcano Manor in Mt. Gelmir.

So I made a Kratos cosplay from Eldenring

If the Magma Blades aren’t quite to your liking, then you can always pick yourself up a Highland Axe from Stormveil Castle, apply Cold to it, and voila, one Leviathan Axe. If you fancy running something different on your half-naked war god, then check out our Elden Ring weapon tier list for further inspiration.