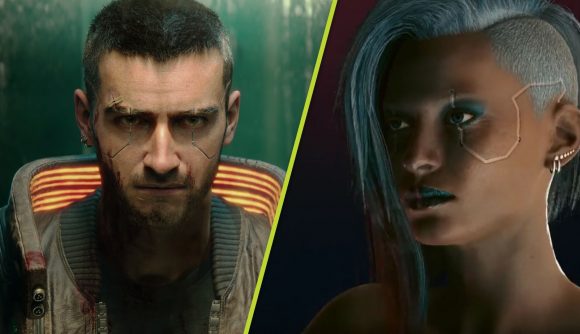 Cyberpunk 2077 is back in the spotlight following the surprise launch of its enhanced next-gen version for PS5 and Xbox Series X|S. With this renewed interest in CD Projekt Red’s RPG, Twitch streamers are picking up the game once again, either for their first ever playthrough or for the first time since the game’s initial release in 2020. This means that we can enjoy another round of panic and red-faced embarrassment thanks to Cyberpunk’s NSFW character creator.

Yes, the Cyberjunk is back. When the game first released, streamers were getting caught out by their character’s, erm, natural appearance in the creator menu, and now we get to enjoy this hilarious trend all over again. The next-gen version of Cyberpunk may have only been out for around 24 hours, but streamers the world over are already getting clipped as they encounter their bare-bodied characters for the first time.

While Twitch’s community guidelines say it is OK for in-game nudity to appear on stream if it’s only for the amount of time necessary to progress, that doesn’t stop ban-conscious streamers from quickly trying to preserve their character’s modesty.

Here’s a quick look at of some of our favourite reactions we’ve spotted so far. And while you probably don’t need telling if you’ve reached this point, we’re gonna anyway: the following clips are NSFW.

While streamers get to check out their Cyberjunk in glorious new visual quality thanks to the next-gen enhancements, you can join them absolutely free of charge thanks to the Cyberpunk 2077 demo that was launched yesterday.