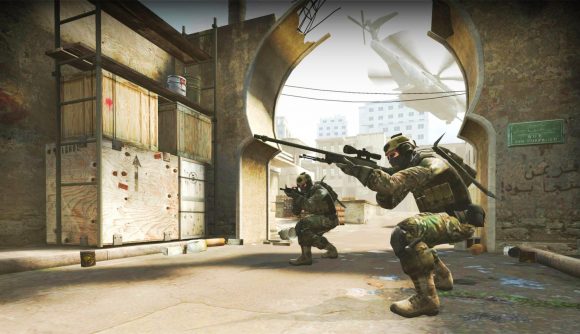 FPS fans will know that Counter-Strike: Global Offensive’s 10-year anniversary is right around the corner on August 21, but so far all players have had to commemorate the event is the CSGO10 sticker event in-game. However, it appears that Valve might have a little surprise in store for the anniversary that will make the game look a whole lot prettier if rumours and a leak prove true.

CS:GO has infamously run on the original Source’s code since its 2012 release, but rumours and speculation have only increased as the 10th anniversary draws closer. Now, CS:GO YouTuber and streamer ‘TheWarOwl‘ seems to have slipped up mid-stream and leaked that the competitive shooter is being ported to Source 2.

“I’m honestly waiting for the Source update in August,” TheWarOwl says in the video clip. “Oh, I shouldn’t have said that.” He could be dead-pan joking of course, but it should be noted that TheWarOwl was a software developer long before his YouTube career talking about CS:GO kicked off, so it would make sense if he knew what was going on behind the scenes.

There have been a number of bugs and glitches popping up in CS:GO recently, including a smoke bug on Mirage that allowed pro player m0NESY to destroy the enemy team mid with a one-way smoke. We also saw the return of the instant bomb detonation exploit, which causes the bomb to detonate as soon as it’s planted.

If TheWarOwl’s information is correct, all of these issues would indicate that a move to Source 2 would be very welcome for the legacy FPS, seeing as CS:GO is still getting regular updates and adjustments even 10 years after release. Such as the M4A1-S nerfs in the June 15 update.