Introduced in the 2013 Arms Deal update for Counter-Strike: Global Offensive, skins in CS:GO have easily become one of the hottest commodities in all of gaming – and with a price tag to prove it. Unlike most other in-game cosmetic systems though, Valve has opted for a community-controlled ecosystem where the players themselves set the prices.

This has led to a lot of good opportunities for players to snag some comparatively well priced items, for example, a couple of the cheapest CS:GO knives that won’t put such a big dent into your wallet. However, the downside to this freedom is that skins have the potential for an ‘unlimited’ price tag – with the most expensive CS:GO skins soaring into the thousands of pounds and dollars. You either have to have a mountain of cash, or be lucky enough to find one in one of the many CS:GO cases available.

Here are the top five most expensive CS:GO skins: 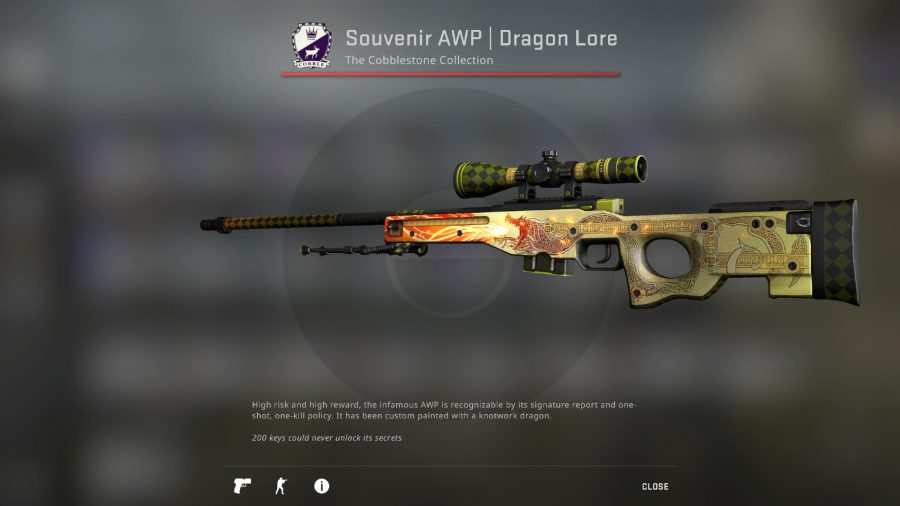 As standard Factory New the gun sells for around $9,000/£7,300 but you can also get your hands on a Souvenir Factory New Dragon Lore, which is currently up for grabs for a mind-blowing $296,969/£241,664. If this sold, it would obliterate the all-time most expensive CS:GO skin sale (which we will get to in a bit) by a considerable margin. 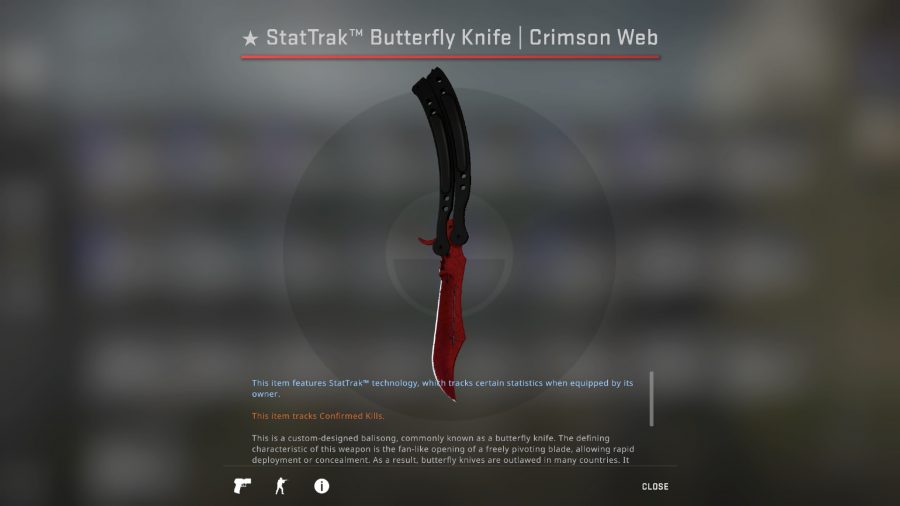 Next to the AWP, knives in CS:GO are the most iconic in-game cosmetic with perhaps even a higher demand. The Butterfly Knife is the most sought after blade of the bunch, appearing twice on this list, and occupying the spot of what is currently the most expensive knife in CS:GO.

The Crimson Web variant sports a jet black handle and a red blade, with spider-web decals printed on top. With this variant, you get a great colour that goes with many other cosmetics like gloves and gun skins, and also a clean finish to add that extra flex to your loadout. Currently, a standard Factory New item will set you back $5,600/£4,500, but if you want it with StatTrak capabilities you’ll have to go all in with a whopping $32,600/£26,500. 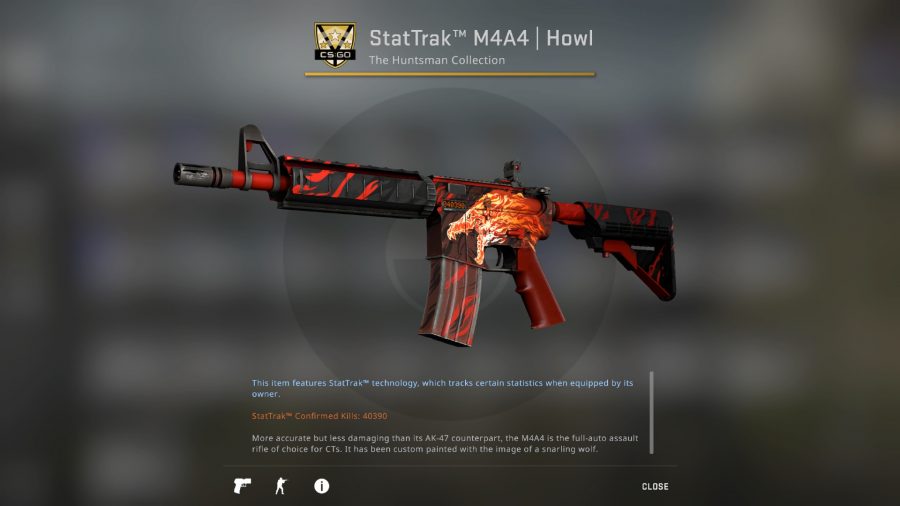 Probably the most infamous skin in all of CS:GO, the M4A4 Howl will cost you a pretty penny in exchange for the envy of all your teammates.

Originally released in May 2014, the M4A4 Howl quickly became the talk of the community as it became the first – and only – Contraband skin in CS:GO, having been removed from drops due to a DMCA takedown from the original artist. Therefore, the only Howls that exist in rotation are those that dropped in the short time it was available.

Importantly, however, the Howl could hypothetically sit at the top of this list as it holds the record for the largest recorded cash trade in CS:GO history at $130,000/£106,000, but that probably has a bit more to do with the three iBUYPOWER Katowice 2014 stickers emblazoned upon its body. 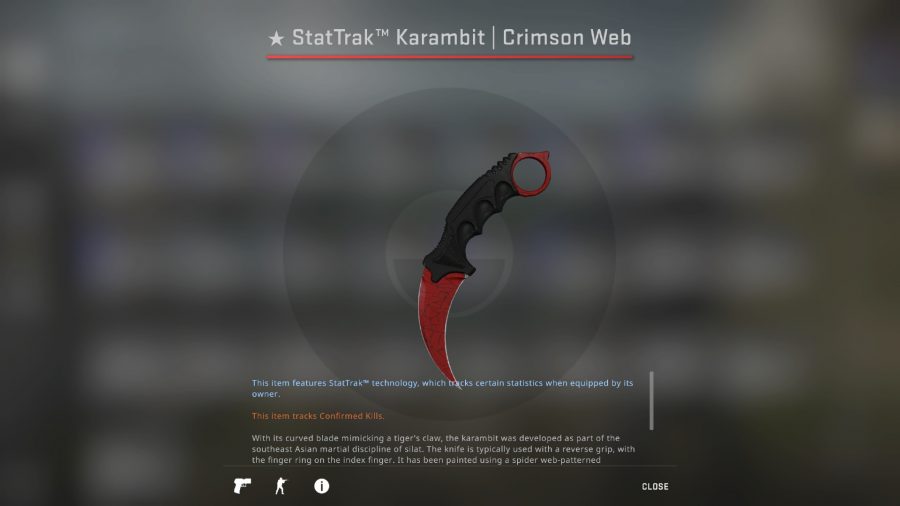 The Crimson Web decal returns in the new form of the Karambit knife, and it is not hard to see why this variant has joined its Butterfly Knife big brother at the top of the ranks. Being one of the very first knives introduced into CS:GO with the Arms Deal update, it holds great historical significance in the Counter-Strike skin trading community.

Much like the Butterfly Knife, the Karambit has unique animations but it also has a unique idle position, with the player holding the knife backwards. Factory New variants of this knife are quite rare however, which explains why the price skyrockets between Minimal Wear and Factory New. The standard FN value, for example, is over four times that of the MW at $4,000/£3,255, but the StatTrak version is a whopping 13 times more expensive than its MW counterpart at $10,700/£8,700 compared to $842/£685. 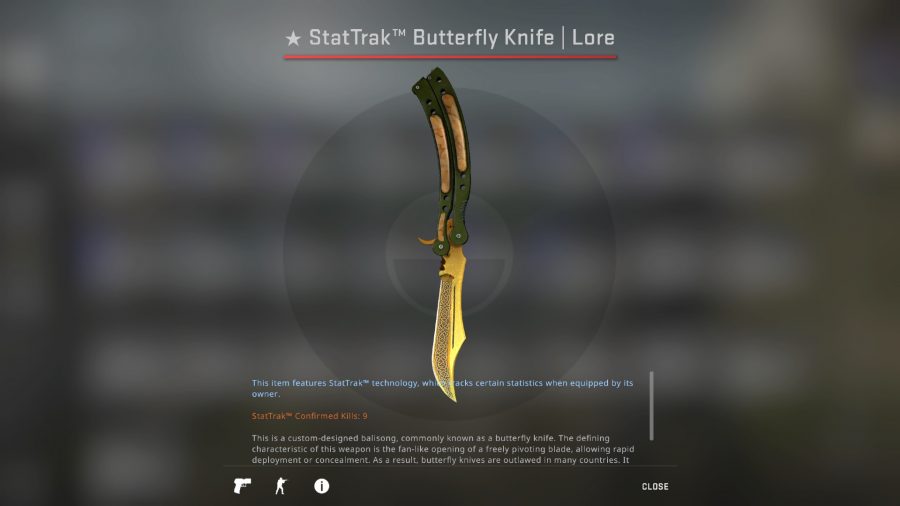 The Butterfly Knife Lore sits as the most recent skin in this list, debuting as a new variant of the ever-loved Butterfly Knife in the Operation Riptide case of September 2021. It can almost be defined as a culmination of the two most expensive CS:GO skins, possessing the form of the Crimson Web Butterfly Knife and the design of the AWP Dragon Lore – no wonder it’s so expensive.

It is a fantastic looking skin with a design that seems to match the shape of the Butterfly Knife perfectly, but if you want to get your hands on this gem and start flipping away, it will unfortunately set you back $6,200/£5,000 or $8,700/£7,100 for the Factory New and StatTrak models respectively.

So, that rounds off our list of the most expensive CS:GO skins on the market right now. You’d have to be pretty rich to purchase even one of these skins, but if you have the cash lying around, why not pick one up and show it off?

The most expensive skins aren’t always the best though, so make sure to check out our list of the best CS:GO skins, or perhaps learn how to surf in CS:GO for a great way to show off your expensive new knife skin.