Global Offensive event and wondered why (and more importantly how) someone was gliding effortlessly around parts of a map? What you had laid your eyes on was Counter-Strike’s strangest offspring game mode, surf, where you ride the waves of triangular ramps in a ‘floor is lava’-style scenario.

The trouble with CS:GO surf gameplay is that it can look like the easiest thing in the world when done right, but in reality it is far from that. Professional surfers float through the mode’s most complicated and convoluted maps with ease, knowing every turn to make and calculating the exact speed they need to make each gap. On the flip side, inexperienced players can often find themselves over-compensating a sharp turn or pressing the wrong keys, resulting in a loss of speed and a fast route back to the beginning.

There are two main CS:GO surf game modes. The most popular is Skill Surf, where you race to get the fastest time to complete a course. There is also Combat Surf, where players fight each other whilst surfing. The key to succeeding in CS:GO surf modes is practice, and with some key tips and tricks you will be on your way to becoming a surfing master in no time.

How to surf in CS:GO

The initial principles of CS:GO surf gameplay are fairly straight forward: hold D if you are on the left side of the platform, hold A if you are on the right side, and never ever press W. What you are essentially doing is falling through the level, sustained by climbing up the ramps that you move across. You could in theory use W to move through the levels, but that would require you to look directly at the ramp – and that wouldn’t be very helpful!

It isn’t as simple as just holding A or D however, as many surf maps require you to gain more momentum to bridge the gaps between the platforms. The key is to start at the top of the ramp and then look at the bottom edge to progressively move down as this is how you gain speed. Stay at the bottom of the ramp until just before the end and then move a small amount back up the ramp to gain enough air to make the gap to the next ramp. 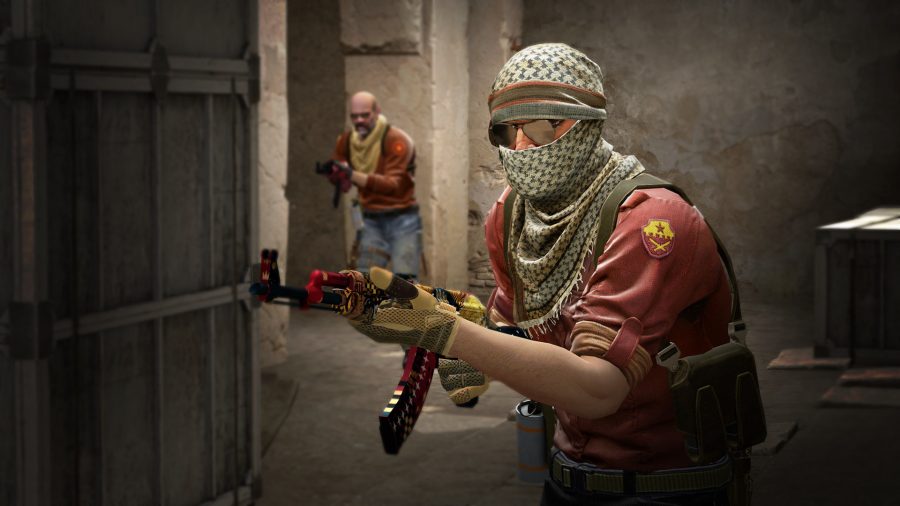 If it is a straight or slightly curved ramp it is best to keep holding either A or D (corresponding to whatever side you are on), but if it is a sharper turn sometimes it is better to let go, or even hold the opposite key to stop yourself flying over the top edge of the ramp.

It will take a bit of time to master these basic fundamentals, but once you have you are free to surf to your heart’s content. The tricky part beyond that – and what separates surf enthusiasts from surf champions – is the mastery of the individual levels. Like any platformer or racing game it is fine and well knowing the mechanics, but to get the best times then you must know the levels off by heart. Now let’s have a look at some of the best courses to get you surf ready.

There are two ways you can access surf maps in CS:GO. You can either go through the community workshop, where you can play offline and solo, or alternatively you can use the community server browser to find new maps or play with others online. 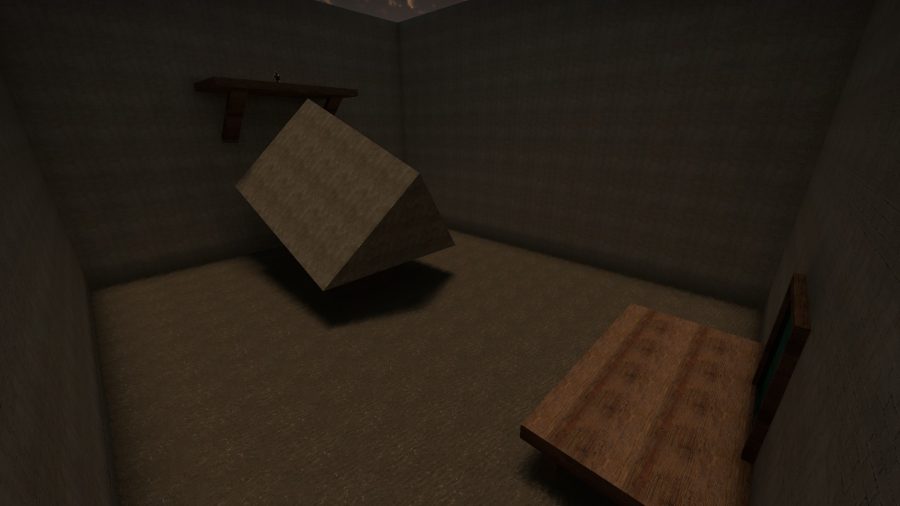 The two best maps to start out on if you’re new to the waves are the aptly titled surf_beginner and surf_rookie. Both can be found easily on the Steam community workshop. The former is probably the first you should be downloading, as it teaches you the basics of jumps, transfers, sharp turns, and hurdles. Surf_rookie continues the steps that surf_beginner introduced, with some more complex stages and a larger variety of challenges to tackle.

Once you’ve completed the beginner courses and feel like you’ve got a hang of surfing, why not give something more fun a go? If you’re one of those people that misses the extreme sports era of gaming then surf_whiteout and it’s 1080 Snowboarding inspired aesthetic is for you.

The Surf for Points series introduces a new level of challenge to the CS:GO surf format by seeing who can collect the most tokens before the time runs out. Each of the four distinctively neon maps contain silver, gold, and diamond tokens which grant one, two, and five points respectively. The better you surf the more tokens you can pick up with this alternative take on the time-focused skill surf format. 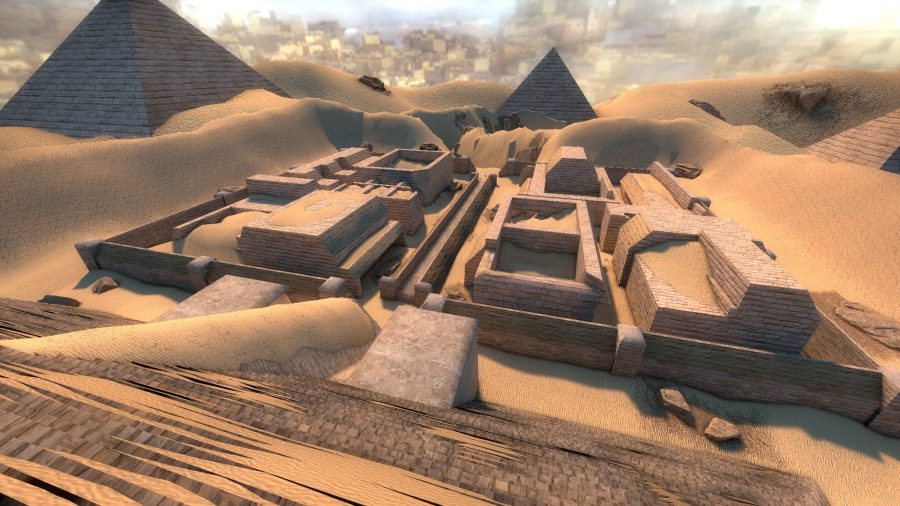 Crafted by the inventor of CS:GO surf himself, Charles ‘Mariowned’ Joyce, Surf_Egypt2 places you amongst – you guessed it – the sand dunes and pyramids of Egypt. Unlike many other maps you will find yourself surfing upon a wide variety of different surfaces from sandy cliffs, to stairs, to even the pyramids themselves. This tricky course will have you occupied for a while if you want to master it. 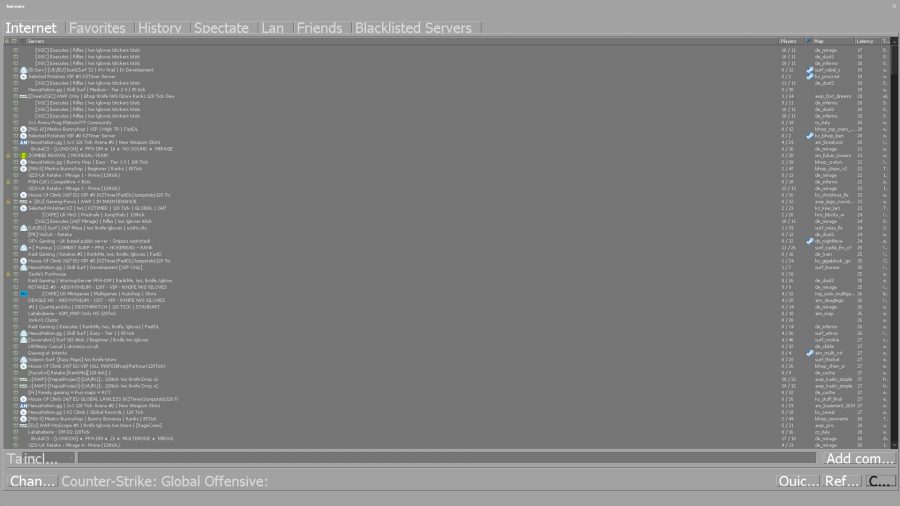 HOW TO USE THE CS:GO SERVER BROWSER

If you’re wanting to surf either with or against others, the best place to do it is through the community server browser. To do this, head to the Play section, click on the drop down in the top right, and then select Community Server Browser.

From there you will be greeted with a screen like the one above, where you can join games, use a search filter, or select from your favourite servers. If you’re wanting the more traditional CS:GO surf experience just type ‘skill surf’ into the tag section at the bottom. It is important to select the difficulty that is right for you, marked by the tier in the name: the higher the number, the more difficult it is.

So that’s how to surf in CS:GO and a couple of the best maps to test your newfound skills out on. It can be tricky to learn at first but once you grasp the basics you will be on your way to surf stardom in no time.

Harry is a writer of all things videogames and cinema. When they are not playing Football Manager or praying to a Bloodborne shaped shrine, they can be found writing for startmenu and their own blog.