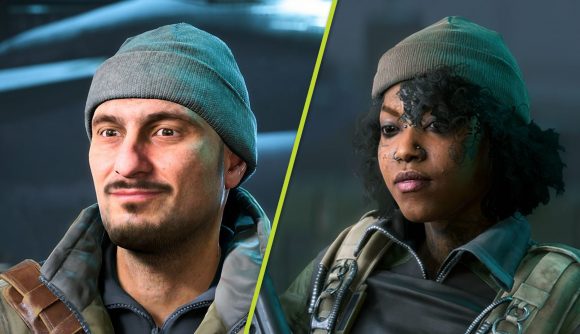 It’s safe to say that Battlefield 2042 fans aren’t having the greatest experience at the moment. Several persistent bugs plague online servers, and with delays to so-called legacy features and the season one update, it’s no surprise that the game’s player count has plummeted. Despite that, DICE is ploughing on with weekly missions, designed to reward loyal players with skins to deck their best Battlefield 2042 specialists out with. Unfortunately for the dev team, the latest reward – the elite tactical beanie – is turning heads for all the wrong reasons.

The beanie, which fits snugly onto Angel’s head, is currently available for players who rack up 30 kills or assists in a game, disrupt or spot 100 enemies, and earn 15 intel or wingman ribbons. While that might sound like a lot, it’s not the requirements that are turning heads – it’s the design.

While the prospect of earning a grey woolly hat was hard to stomach already, it gets worse. That’s because Angel’s elite beanie looks suspiciously similar to the one Sundance wears in the Mamba skin. We can’t confirm it is the same one, but if you take a “mental picture” of both, as streamer ‘Baranox’, who discovered the similarities, told his viewers, you’ll see a striking resemblance.

Both the beanies are grey, they have the same material patterns, and they both sit on each specialist’s head in the same way. Sure, beanies generally aren’t exactly unique pieces of clothing, but in this situation, in which DICE is having to win back fans after a rough launch, it’s hardly a good look, and fans aren’t happy.

“I swear this game is progressively getting worse and worse as time goes by,” one response to the announcement tweet reads. “Barely any major improvements with fixes we got, just announcements of upcoming bug fixes … this franchise deserves better.”

While the tactical beanie is somewhat of an oxymoron – it certainly won’t protect you from a well-placed bullet – it is worth noting that it is in reference to Haggard’s beanie, an old Battlefield Bad Company meme.

However, old memes aren’t enough to satiate an already frustrated community, especially one that’s signing a petition to get a refund on the game – and a possible class action lawyer – in their droves.