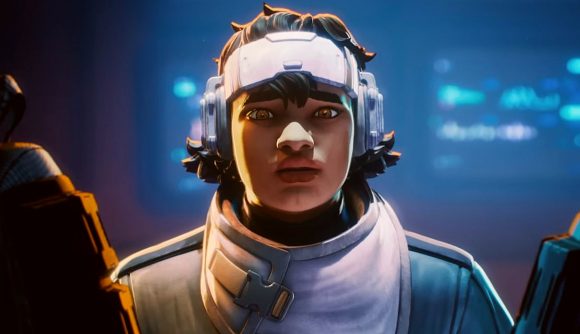 It’s safe to say that battle royale players are always looking forwards to another Apex Legends title update – and, thankfully, one’s on the way. Respawn Entertainment has been teasing the next seasonal update in the build up to the Apex Legends Season 14 release date and a brand new cinematic trailer has just dropped with Vantage – the newest legend to join the Apex Games – front-and-centre. While the cinematic trailer doesn’t explicitly detail Vantage’s kit, it does hint at what’s to come.

Following Apex Legends’ Survive short that showed us the new Season 14 character for the first time, Respawn Entertainment has now released another cinematic trailer that shows us how said new character fares in the Apex Games. What’s interesting about all this, aside from the interesting insight into this character’s lore and relationship with the other legends in the Apex Games, is that it appears to hint at what Vantage’s abilities and kit will look like.

This is something that Apex Legends character leaks have offered us an insight into earlier this year, but now we have our first official look at what Vantage brings to the table – and we’re seriously impressed.

From what we can tell, Vantage is going to make use of some sort of scanner to identify enemy targets from a distance. How much this will help Vantage players and their squads, only time will tell, but it does look like – at the very least – it will identify which legend you’re looking at.

In addition to this, it appears that Vantage has some sort of back-mounted jet pack or rocket booster (are we looking at Valk 2.0?) This isn’t exactly something we’ve seen before, but there are plenty of faces in the Apex Games with movement-based abilities so it isn’t wouldn’t be surprising to see another.

Want to check out what we’re talking about? You can in the trailer below:

As for Echo, Vantage’s adorable little bat companion? Well, we don’t know how they’ll play into things just yet. But, Respawn Entertainment teased that they would be an important part of Vantage’s character earlier in the week – with this tweet about Vantage’s Apex Games’ application – and it looks like they’re going to play a more significant role than other animal companions we’ve seen in the past. However, Bloodhound’s raven and Ash’s rat are both cosmetic additions to her character – so, we could see a similar situation here.

While we still don’t know all the details about Vantage’s abilities and kit, we do know that she’s going to be a sniper-focused Legend that “learned the hard way to become the ultimate survivor” – according to Apex Legends’ Hunted web page.

We also know that, elsewhere in the Season 14 update, players can look forward to a reforged Kings Canyon – which should see some exciting map updates be implemented – and a level cap increase. We know we’re asking the question “can Apex Legends Season 14’s Kings Canyon rework make it ALGS-worthy“, but we won’t know for sure what changes are being made until we get closer to next season’s launch.