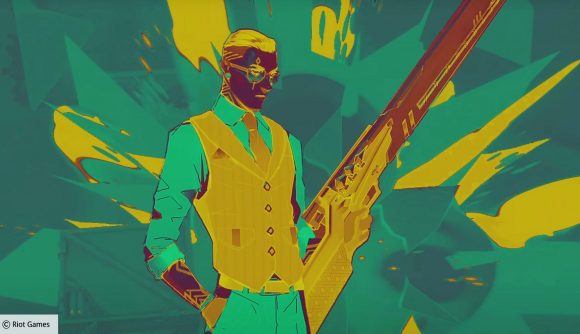 Not long after KAY/O was released back at the beginning of Valorant Episode 3, Act 1, dataminers swiftly began working away at discovering more about what the game’s next agent would bring to the table. Since then, we have learned that the new Valorant agent is codenamed ‘Deadeye’, and he’s a rather debonair-looking, rifle-toting fellow.

Despite a widespread expectation that Deadeye would be available to climb the Valorant ranks with at the launch of Episode 3, Act 2, he was ultimately nowhere to be seen. With official details so thin on the ground, it’s pretty likely that the agent won’t make an appearance until Episode 3, Act 3. To tide us over until then, character producer John ‘RiotMEMEMEMEME’ Goscicki has today shared a couple of new details on Riot Games’ upcoming agent.

Firstly, RiotMEMEMEMEME seemingly confirms that the new agent will be a Sentinel – something we were fairly confident of in our own predictions. And it won’t just be any old Sentinel, either. It will be “a Sentinel that focuses on mechanical outplays, with an additional focus on gunplay into the mix for an extra flourish,” the dev says. Although that’s all we’re getting info-wise for now, RiotMEMEMEMEME says that, “once you achieve that dream moment, it will be magnifique.”

The little French sign-off is actually a pretty significant link, considering that a French accent could be heard narrating over the ‘Uncover Fracture’ map teaser trailer – this appears to confirm the voice belonged to Deadeye. During the trailer, two specialised rounds containing a mysterious material connect, causing the incident that results in the Fracture we know.

The next agent is a Sentinel that focuses on mechanical outplays and an additional focus on gunplay. A teaser image was also posted. | #VALORANT pic.twitter.com/ncsVqOyNzE

As such, it looks like Deadeye will not only be a Sentinel, but the Frenchman has a major role to play in the events currently unfolding in the lore, too.