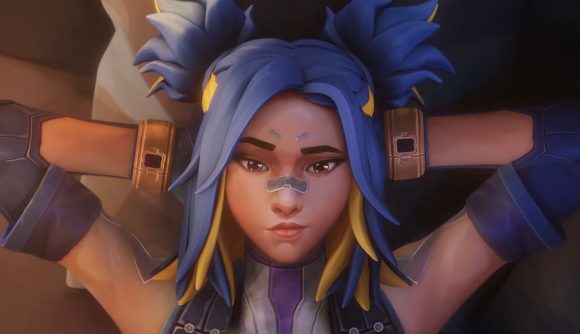 Neon has been confirmed as agent number 19 in tactical shooter Valorant by Riot Games, and this electrifying duelist looks set to really shake things up.

From the look of the trailer for the new Valorant agent, who originates from The Philippines, Neon comes with an aggressive kit built around speed and confusion, and a quite literally shocking ultimate that will certainly suit those looking to rack up a lot of kills while climbing the Valorant ranks. In the trailer, Neon is seen sprinting at high speed while dodging enemy abilities and also sliding around corners, which is bound to give those holding an angle a mighty surprise.

She is also seen using a throwable that can bounce off of surfaces and detonates with a surge of electricity when it lands, seemingly damaging or stunning enemies in its radius. Neon also has some impressive screening abilities to allow her to charge forwards without being exposed. Casting an ability will summon two blue walls parallel to each other, essentially creating a runway for Neon to speed down without being spotted.

What is assumed to be her ultimate ability also looks incredibly strong. From her fingers, Neon casts a steady beam of electricity that can damage opponents.

Neon’s kit looks to be extremely diverse and powerful, and will probably be a shock to the system for players when she arrives next week. The character design also has to be commended, with Neon certainly standing out from Valorant’s ever-growing roster of agents.

What’s interesting though is that despite Riot often distancing the worlds of Valorant and its popular MOBA League of Legends, Neon shares some similarities with LoL’s next champion.

Marksman Zeri will also harness the power of electricity in her abilities, and boast very quick movement speed… Hmmmmm…

Neon will spark into life on January 12 when Valorant Episode 4 begins, and with a kit that exciting, expect her pick rate to soar into overdrive.