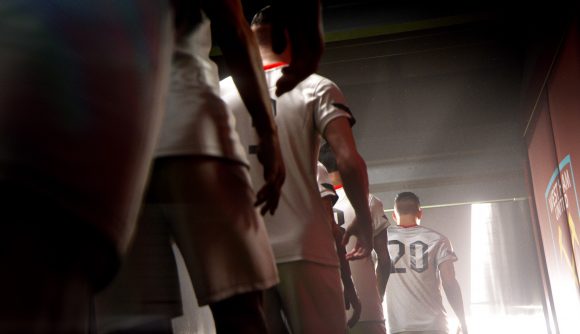 Strikerz Inc. has revealed a brand new free-to-play football game for consoles called UFL. Created on Unreal Engine, this competitive title looks to take on the competitive communities of both FIFA and Pro Evolution Soccer, the latter of which is rebranding to the free-to-play eFootball later this year.

Billed as “a revolutionary new global online football league”, UFL offers a pool of 5,000 licensed players, thanks to a partnership with FIFPRO, which you can acquire to create your very own club. While West Ham United’s branding and stadium was shown in the reveal trailer, there is no further news just yet around individual club and league licenses. There is sadly no news on a set release date or release window just yet either.

The game has been in development since 2016, and will use sports performance analysis company InStat to “provide detailed data and up-to-date statistics for each player.”

In a similar fashion to the fledgling GOALS, which was revealed as yet another contender in the football sim arena earlier this month, the focus for UFL is on fair competitive play. This is a clear attempt to attract disgruntled FIFA players, who often complain about the series’ gameplay being too unpredictable and heavily influenced by the AI.

“The game will be available for free and we will regularly add new features and updates with no mandatory payments or yearly fees,” Strikerz Inc. says in a press release. “The game is designed to be a fair to play experience that implies a skill-first approach and zero pay-to-win options.”

“We are football fans and passionate gamers — we have been playing football video games for years and we know exactly what people want to see in a football simulator,” says Eugene Nashilov, CEO at Strikerz Inc. “We want to reinvent football video gaming from the ground up, offering players around the world a revolutionary, exciting and fair to play experience.”

UFL has been revealed at an interesting time for football games. With the FIFA 22 release date fast approaching, Konami’s pivot to free-to-play with eFootball coming not long after, and GOALS already trying to stake a claim to a competitive and esports-focused football game, UFL has a lot of competition.