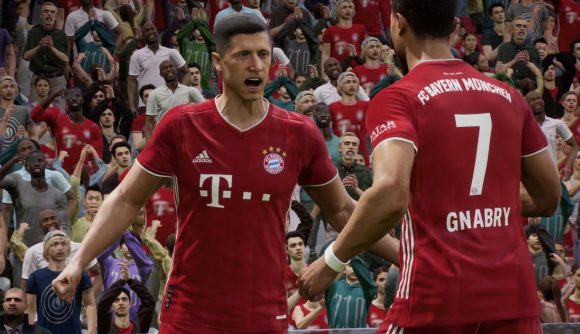 Konami’s free-to-play successor to its Pro Evolution Soccer series, eFootball, aims to do a lot of things differently – both compared to its former self and its main competitor, FIFA. Shifting more towards a freely downloadable live service model, with both frequent small updates and larger updates at the start of each football season, the monetisation of eFootball has been one of the biggest talking points.

With FIFA sticking to the model it knows best – a new game every 12 months, and plenty of opportunity for in-game purchases – eFootball is trying a different approach. Series producer Seitaro Kimura outlines exactly how Konami plans to monetise its new-look football game, and reassures that there will not be a “pay to win system”.

“Paid elements will include individual players for our new Team Building Mode, Match Passes, and we plan to sell additional modes in the future,” Kimura tells The Loadout. “We are focusing on making sure that all players can enjoy a fair game, so the game specifications will not be a pay to win system where paid elements will determine who wins or loses in a match.”

Konami has also doubled down on this sentiment in a Q&A Twitter thread, saying that eFootball will not have the “strong lottery elements” of previous PES titles.

While acquiring players via a paid Match Pass, or getting individual players for the Team Building Mode, sounds to us like there actually is some element of pay to win, Kimura says more information around this topic will come out later this month.

A: Previous games had a strong “lottery element”, but eFootball™ lets you nominate and acquire your favourite players with Match Pass, a system to receive items based on matches played. Free & Paid Match Passes will be available.

As previously mentioned in its initial eFootball announcement last month, standalone game modes will also be sold as DLC add-ons. In the Twitter Q&A, Konami confirms that a fan-favourite mode, Master League, will be one of these.

When asked if the total cost of all the DLC modes released over a 12-month window would be more or less than a standard edition of FIFA 22 (approximately $60), Kimura says that exact prices cannot be shared just yet. He does however say that they will be sold as “premium content”.

With the eFootball release date fast approaching, and Konami promising that lots more information is on the way in August, expect a lot of questions to be answered very soon.

Keep your eyes on The Loadout this week for more insight from Kimura about eFootball. In the meantime, check out what Kimura had to say about gameplay and new-gen console features.