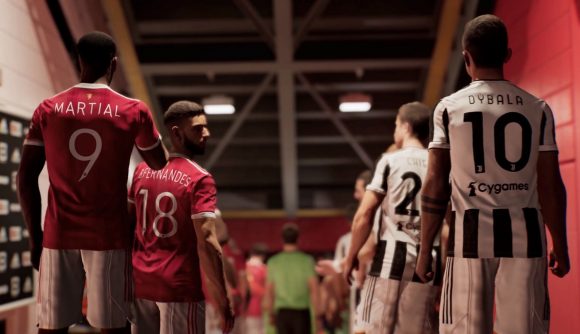 For years, Konami has been working out how its football sim, Pro Evolution Soccer, can chip away at the loyal and massive playerbase of its rival FIFA. Whether it’s snapping up big licenses for major football clubs like Juventus, or bringing in established football stars such as Lionel Messi and Neymar for marketing while FIFA targets the youth with Kylian Mbappe and co., it’s always tried to disrupt EA’s behemoth.

However, today it has announced its most radical move yet – ditching the historic PES name, rebranding to eFootball, and going completely free-to-play with plenty of exciting (and potentially FIFA-busting) features.

eFootball will be a gradual-building process, starting in the “early autumn” with a massive gameplay engine update and the ability to play as nine football clubs (including Manchester United, Arsenal, and Barcelona). According to the roadmap, this will feature cross-generation matchmaking, meaning those on old-gen and new-gen PlayStation or Xbox consoles can play with each other.

Later in the autumn, eFootball will really gear up. Cross-play between PlayStation consoles, Xbox consoles, and PC will roll out, as will online leagues, and a yet to be named “team building mode” that will likely be a rival to FIFA’s Ultimate Team. There will also be the introduction of a Match Pass – a battle pass, to you and I.

Then the final step of the road map is billed for winter, where competitive esports tournaments will begin, mobile controller support will be released, and the game will go fully cross-play between consoles, PC, and mobile devices.

Aside from all of that, eFootball will boast an improved engine thanks to its transition to Unreal Engine, with new “Motion Matching” technology – a clear competitor to FIFA’s new HyperMotion gameplay features.

While the base game is of course free, a Konami press release does say that “certain game modes will be sold as optional DLC, giving players the freedom to build an experience that follows their interests.” It is currently not clear if this includes any of the modes listed on the roadmap.

#eFootball™ is on a path to change football gaming forever, and it doesn’t stop at launch.

As an evolving platform, we will deliver regular updates and upgrades to players. Including more modes in the future.

This new approach and decision to drop the PES name is certainly ambitious, and Konami says more details about eFootball will be revealed in late August.

eFootball will release on PS5, PS4, Xbox Series X|S, Xbox One, Windows® 10 and PC Steam® this autumn, with mobile releases on iOS and Android devices following soon after.