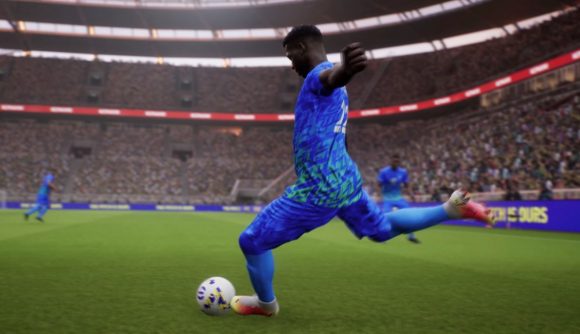 September 2, 2021 Konami has revealed that these DualSense features will not be available when the game launches on September 30. Instead they will be added in a future update.

One of the most ambitious parts of Konami’s revamped football game, eFootball, is the plan to create a single gameplay experience that is fully cross-platform with consoles, PCs, and mobile devices. To achieve this, Konami has made the decision to shift development to Unreal Engine.

While the developer has confirmed to IGN already that the game will still be built for “consoles first” and then scaled down to suit mobile devices, many questions have been raised over whether this will compromise the experience on top-end PCs and new-gen consoles.

Konami has reassured fans that graphics and performance will not suffer to facilitate mobile players, and that eFootball “will take full advantage of the hardware capabilities of each supported device.” Series producer Seitaro Kimura confirms to The Loadout that this means eFootball on the PS5 will “support haptic feedback and adaptive triggers” on the DualSense controller.

Kimura also reveals some of the other differences players will see when playing eFootball on top-end hardware.

“While the core game engine is the same for console and mobile, we’re working to ensure the best gameplay experience on each platform,” he says. “[New-gen] consoles and high-performance PCs allow us to devote more resources to gameplay, so we’ve included a variety of elements that are not possible on mobile, such as 3D lawns, spectators’ realistic movement, cross-processing of moving kits, rich lighting, and motion blur. This is something that cannot be achieved on a mobile device.

“The sound, which is important for creating a stadium atmosphere, has been reconstructed from scratch, and the cheers and sighs of the crowd will add to the excitement of the game, too.”

Q: Will next-gen graphics be downgraded to play against mobile users?

A: We will make graphical adjustments to the mobile version but the next-generation graphics on consoles and PC will not be downgraded.

Kimura stresses that some of these features will “not be included at the time of release” and will be “implemented in a future update”.

Speaking more broadly about the gameplay experience, Kimura says that, in his personal opinion, the most “interesting” gameplay difference between eFootball on Unreal Engine and previous PES titles on the old engine is the one-on-one battling between an attacker and a defender.

“We brought in [Andrés] Iniesta and [Gerard] Piqué as our gameplay advisors and asked them for their advice,” Kimura says. “[We made] a big decision to change the controls that people are used to, but it made the battle for the ball more realistic and more reflective of the user’s skills.

“We also worked on the match camera. A new camera called Duel, as the name suggests, was developed to allow players to enjoy the 1v1 battles that are the focus of this title. In situations where you are building up from the defensive line, you can see a wide area from a perspective similar to that of a conventional camera. It seamlessly switches to a closer view as the winger on the side has the ball or approaches the opponent’s penalty area. You can enjoy the delicate touch of the ball, feinting to deceive your opponent, defending with your body, or blocking a shot at the last second.”

While eFootball is built to span across various powers of hardware, it’s clear that there are plenty of extra benefits for those playing on new-gen consoles and PC. Those players will have to take early gameplay with a pinch of salt, though, as those features will not be ready to go straight away on the eFootball release date.

Stay tuned for more eFootball insight from Seitaro Kimura this week on The Loadout.