Konami has performed a radical change of direction when it comes to producing a football sim to rival the behemoth that is the FIFA series. For many years the Pro Evolution Soccer series has failed to reel in FIFA’s die hard fanbase in any considerable way, but all that might be about to change if its new plan works as intended.

Not only is it starting afresh by ditching the PES name to be known simply as eFootball, but it is going for a free-to-play, fully cross-play, live service approach, along with a newly refurbished game engine now running on Unreal Engine. These changes mean that instead of trying to replicate the FIFA model, eFootball now offers an alternative to football fans.

With Konami’s football game getting the most attention it’s seen in years, there are plenty of questions about the new-look eFootball that need answering. When is the eFootball release date? What licenses does it have? And which devices can I play it on?

We’ve got all the answers for you right here as we dive into everything we know about eFootball.

The eFootball release date is September 30, 2022. This will be the release date for the console and PC versions of the game, while the mobile version will launch a few weeks later in a future update.

Interestingly, this is just one day before the full FIFA 22 release date – that’s going to be an interesting couple of days…

Konami’s eFootball is free-to-play, but additional game modes (which will be released at a steady rate once the game is live) will cost money to access.

Konami is yet to explicitly say which elements of the game are free, but it appears that online leagues using standard teams (such as Manchester United) will not cost a penny. 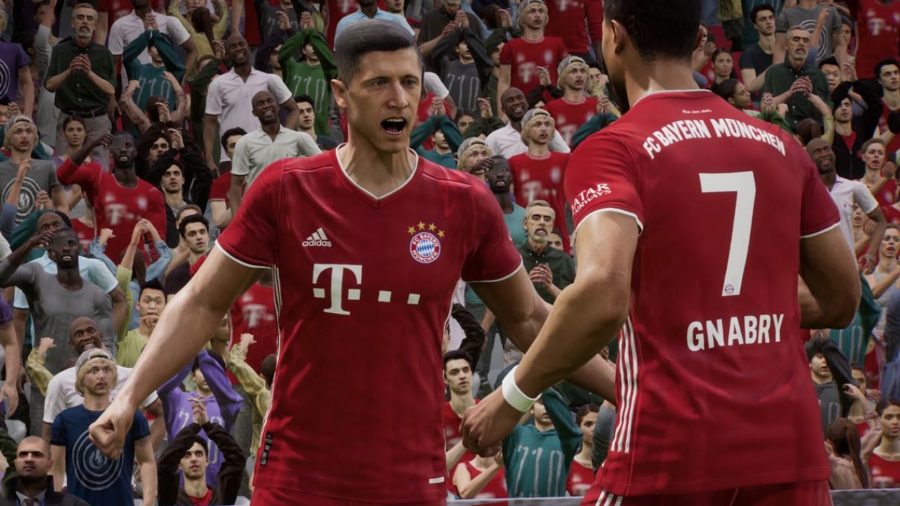 eFootball will release on PS5, PS4, Xbox Series X|S, Xbox One, and PC this autumn, with mobile releases on iOS and Android devices following soon after.

One of the biggest attractions of eFootball is that it will eventually have full cross-play. This will be rolled out in a staggered fashion.

When eFootball launches in the autumn, there will be cross-generational matchmaking between old-gen and new-gen Xbox and PlayStation consoles.

In an update soon after, this will evolve into cross-play between all consoles and PC.

Finally in the winter, eFootball will go fully cross-play when the mobile versions on iOS and Android are released, meaning console, PC, and mobile players can all matchmake with each other.

Konami has released this eFootball roadmap to help visualise its first three updates for eFootball. 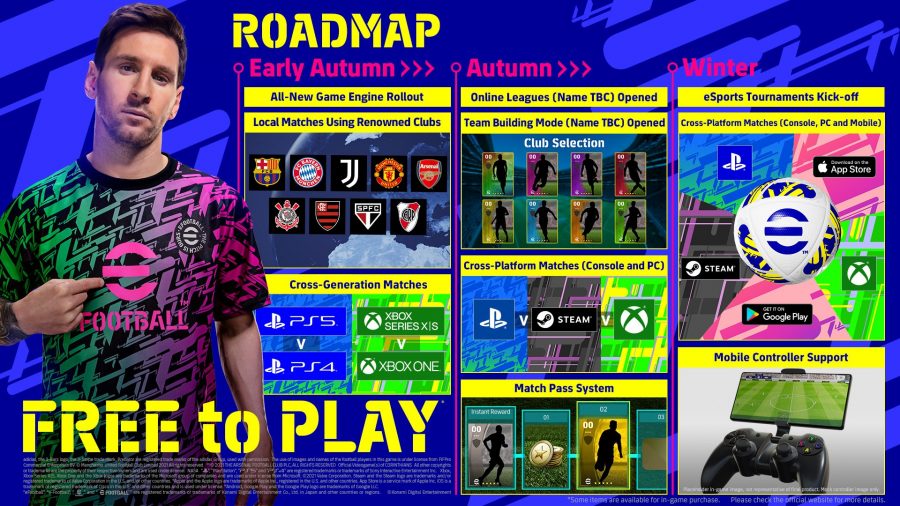 Konami showcased some eFootball gameplay in the trailer below, which introduced us to new mechanics like Sharp Kick and the Duel Camera.

eFootball’s gameplay will have a big focus on one-on-one battles, with dribbling, movement, and defending all being improved to make them feel like exciting in-game moments.

Following on from PES, Konami has secured dozens of licenses for football clubs that will be in eFootball, including some that are exclusive.

Exclusive eFootball licenses include four major Italian football clubs: Juventus, AS Roma, Napoli, and Atalanta. This means these four teams’ names and club badges will not appear in FIFA 22.

There are further partner clubs featured in the reveal trailer, such as Manchester United and Bayern Munich. The roadmap also shows clubs like Arsenal, FC Barcelona, and Corinthians as playable, licensed teams in eFootball.

That’s all we know so far about eFootball, the successor to PES. With the base game being free, and players having the freedom to pay for whatever future modes and content they like, it’ll be interesting to see if it can finally make a dent in FIFA’s armour.