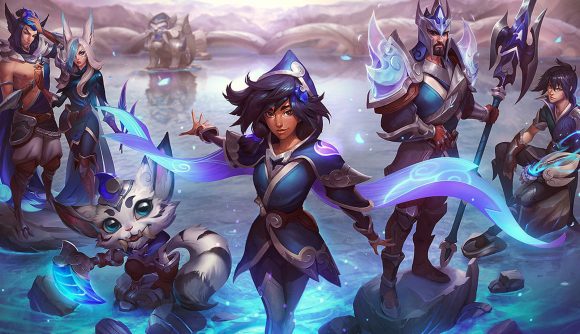 A former member of the League of Legends Worlds 2017 champions Samsung Galaxy claims that he and some of his ex-teammates are still waiting to receive a cut of the revenue generated from the sale of their Worlds champion skins.

During a livestream, toplaner Lee ‘CuVee’ Seong-jin says that he and three other members of the team never saw any kick back from the sale of the Samsung Galaxy skins, which were designed for champions Ezreal, Gnar, Jarvan IV, Rakan, Taliyah, and Xayah. The 2017 world champion explains that two members of that roster, Lee ‘Crown’ Min-ho and Jo ‘CoreJJ’ Yong-in, received payments when they eventually joined teams in the LCS. However, the rest of the team, who all continued to play in South Korea after Samsung Galaxy was acquired by Gen.G, never got paid their cut of skin revenue.

While the Samsung Galaxy brand is no more, it’s not as if all the players on the team disappeared into irrelevance or retired immediately after their 2017 Worlds victory, as the same roster competed under the Gen.G banner at the following Worlds. For them to have not received payment while the two players who went to play in America did is rather puzzling.

As it stands, no one is exactly sure who is to blame at the moment and if CuVee and company will ever receive their cut of the Samsung Galaxy Worlds skin revenue.

Can confirm CuVee indeed said this on the stream.

That the players in Korea are yet to receive their cut of their skins.

It is likely that a complicated mess of contract clauses and different rules and regulations in the USA and South Korea is the reason for why Riot NA could give CoreJJ and crown their cut but Riot Korea has not yet paid CuVee and company.

The revenue made from the sale of Worlds winners skins can be very lucrative for the players involved. So lucrative in fact that this year’s Worlds prize pool has been altered so that the winning team receives a smaller percentage of the overall pot.

Due to the huge money made through the skin sales, Riot deemed it fair to distribute the prize pool more generously for the other teams at the competition.