It was announced last week that in The Quarry, the upcoming interactive horror from Supermassive Games, we will have three lives. Well, sort of, anyway. The “death rewind” system is unlocked once we finish the game, and will give us three opportunities to bring a character back to life. While it’s not really a key feature of games these days, the mechanic is just as important today than it ever was.

“Careful, you’ve only got one life left.” There was a time when your mates would hiss these words into your ear as you frantically hammered away at the arcade cabinet you’d just filled with coins, to which you would snap back that yes, you were well aware, thank you very much. Having few in-game lives was the main cause of tension; playing with bated breath, knowing that if you lost them all it was back to the start.

Like videogames themselves, the origin of the life system was in the arcade; it was an abiogenesis of bleeps and bloops and flashing lights from which today’s rich and diverse gaming industry has stemmed. Back then, in a time when bell bottom jeans were fashionable, lives were called “credits,” and you obtained them by putting money into the machine. You paid for more lives to play more games, and it made sense – with unlimited lives, one person would hog the machine all day, and the arcade itself wouldn’t make any money.

Once gaming came home in the form of consoles, lives came with them. Then came other means of replenishing life and reviving oneself, which, along with regular checkpoints and save files, made the concept of arcade-like lives obsolete. Why worry about lives when we can try that overpowered boss again and again, consequence-free? Characters like Nathan Drake needn’t worry about death due to infinite lives and a checkpoint every half yard.

They recreate the tension and pressure of the arcade days

If you only play games like this, you’d think lives are obsolete – restarting Uncharted again and again would be an absolute slog. Yet, as we have seen in The Quarry, modern games still give us a set amount of credits, and their incentive is more than just lightening our wallet. They recreate the tension and pressure of the arcade days, as well as enhancing both gameplay and story.

In 2017’s Hellblade: Senua’s Sacrifice, our protagonist – a Pict warrior suffering with psychosis – has her own personal life mechanic. In an ingenious decision by the developers, we’re told that whenever Senua dies, a black stain will grow on her arm. After the first death, a message appears saying the following: “The dark rot will grow each time you fail. If the rot reaches Senua’s head, her quest is over and all progress will be lost.” 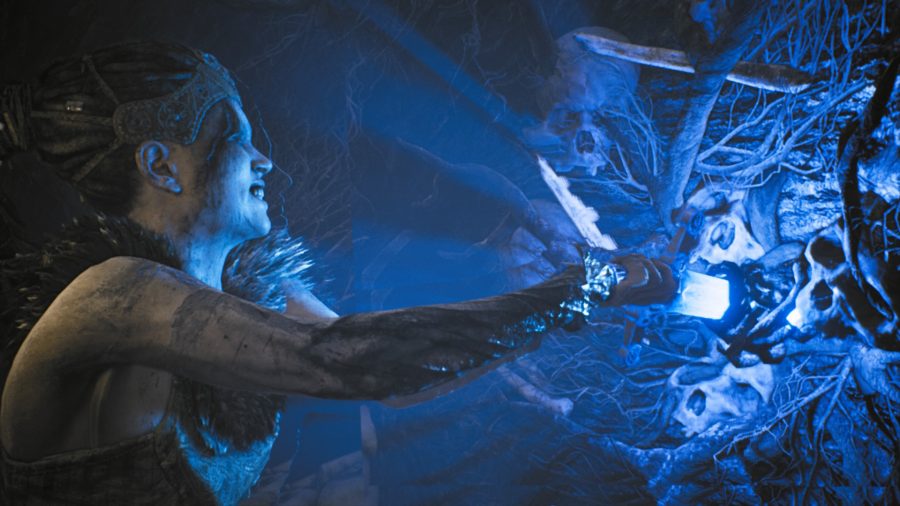 It’s a haunting visual metaphor; once the dark rot reaches her head, the game is over, and your progress is wiped. You have no choice but to start again from the beginning. Except this isn’t actually the case. If you die enough times, you’ll learn that the promised permadeath and progress-wipe never actually happens. The intention of the message, and of the encroaching and ominous black rot, is to put some of Senua’s panic and fear into the player. The purpose of having lives in Hellblade is to create drama and empathy with the protagonist. It’s not a mechanic, but a dramatic technique based on old-school arcade credits.

2020’s Hades, on the other hand, actually uses the life mechanic. Once we run out of health or revives, just like in the arcades, the game is over and we’re back at the very start. But not only is this permadeath expected, it’s constructive. Like some other roguelikes, we keep items and experience from our previous runs; it’s back to the start but not back to the drawing board. In fact, the continuous cycle of repeatedly dying and restarting ties into the game’s storytelling. Once Zagreus, the protagonist of Hades, returns to the start, other characters acknowledge his failure and, in the ensuing dialogue, reveal more backstory.

It sounds like the death rewind feature – once unlocked – will be an important mechanic in The Quarry’s replay value. As the game has 186 different endings and a huge cast of characters, it will be a drag to find ourselves going down the same path as last time. Our three lives are our three opportunities to make sure the next run is nothing like the last, meaning we’ll be able to achieve a different experience every time we play.

It all goes to show that lives aren’t some antiquated hangover from the arcades, they’ve transcended into a new realm of gameplay and storytelling. While it might be whimsical nostalgia, I’m happy that arcade credits have stubbornly persevered and still remain useful.

Ben is a writer who lives among the mountains of North Wales. A lover of all things retro, he spends most of his time playing old games, watching old films, and reading old books. He's looking forward to The Quarry.